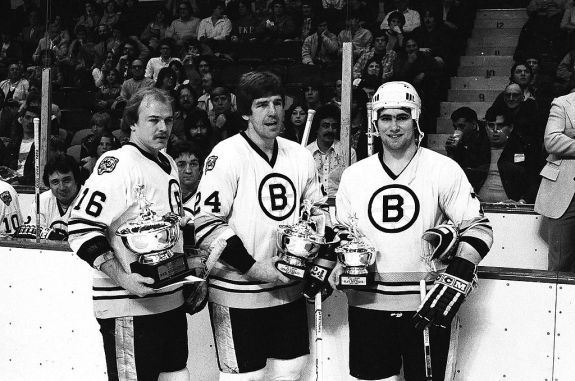 “You play by the rules, or you don’t play at all!”

The echo of these words, usually delivered by my father in the most serious of tones, would carom off the cellar walls like a hastily iced puck would do off the old Bahhston Gahhhden boards.  It was his way of reminding 7-year-old Evan that even in the made-up sport of “basement hockey,” there was still protocol.  There was still a gentleman’s code (or in my case kid’s code) that should never be broken. No goofing around. No whining about losses or bragging about wins.  No going into overtime aka “the-real-Bruins-game-is-on-so-you-can’t-keep-pretending-to-be-Andy-Moog-all-night-down-here-because-I’m-not-missing-Renee-Rancourt-singing-the-anthem-again” time.

Believe me when I say my Dad played by the rules.  Bernie played by the book.  Because of this, I learned to love Boston hockey much in the same way By The Book Bernie” (BTBB) did: with plenty of puck passion, attention-to-detail, and respect. I knew exactly what I was getting into between the B’s, the basement and BTBB. And I wouldn’t have changed it for the world.

When you grow up in Western Mass, in the beautiful Berkshires of the Bay State, you have a choice of where your fandom will lie — across the minutes-away border of New York state or with Boston.  That choice didn’t exist for my Dad. His loyalty was always with the hometown, Beantown boys.  He “bled Black N’ Gold” as many guys his age used to say (and as this eponymous blog reminds us daily) when watching their favorite team take the ice.

Naturally, I followed suit.  I wanted to cheer on his team, and now my team, just like how we played hockey down in the basement.  Sure we’d yell, scream, hoot & holler–sometimes at each other in jest, especially when he’d go all Gerry Cheevers on me and play the puck (aka sponge ball) way out past the blue line (aka carpet demarcation line).  But it was all in good fun!  It was a bonding experience. The B’s brought us together and still do to this day, which is why I feel like it’s come full face-off circle for me now as a fan, a comedic writer, and a son.

Well, this son and lifelong B’s supporter/complainer just talked to BTBB about the team I remember first watching with him and how so many names from back then are still relevant now.  Strike that… they’re integral. Bourque. Neely. Sweeney. Donato (just to name a few).  And with the ladder also being a father-son connection, I was all nostalgic when it came to our conversation. The main point: could some of his favorites who just missed out as players on Lord Stanley’s coveted Cup back in the 80’s & 90’s now achieve that success in management. Namely, Dealin’ Donny since good ol’ Sea Bass himself played a pivotal role in constructing the 2011 title team. My answer: you bet my Bruins Wives Charity Carnival autographed Vinny Reindeau towel they can!

But can they do it as soon as 2019? Based on the truly remarkable, surpassed-all-expectations-despite-the-moans-and-groans-of-losing-in-the-second-round-to-ugh!-Tampa 2017-2018 season, I definitely think so.  And I don’t even think they need that “JT” whose making more Twitter & social media headlines than his same-initialed entertainment counterpart to do it! (Full disclosure: if I just imagine, just imagine, just imagine John Tavares in a Bruins jersey, I truly can’t stop the feeling.)

Speaking of feelings, how Sweeney and Neely, and in turn, Cassidy, have turned things around in just a few short years in “The Hub” is not only promising for the future of the B’s, but also their fans like myself and BTBB.  This current team is the ideal blend of youth and experience, of talent and leadership, of workmanlike will and sportsmanlike skill — qualities that every Dad hopes for in his son and every son hopefully admires in his Dad.  They’re also qualities imbued within the fabric of the team by the aforementioned higher-ups whose hirings were crucial to the success of the franchise, both in the past, in the present and undoubtedly in the future!

So when our conversation turned to the B’s so far having a slow off-season, what with no 1st round pick in the draft or Kovalchuk signing, I started to joke to my Dad about Mr. Sweeney using, perhaps, some persuasive and bribery-based tactics to lure other promising talents to Boston.  It was at this moment when my (crazy) train of thought was cut short by an all-too-familiar fatherly edict: “Evan, that’s against the rules!”

And Lord (Stanley) knows, you either play by the rules, or you don’t play at all.  BTBB was right again. Father does know best.  Thankfully, when it comes to the management of the Bruins, so does one of Dad’s favorite former D-men.  In Don We Trust!