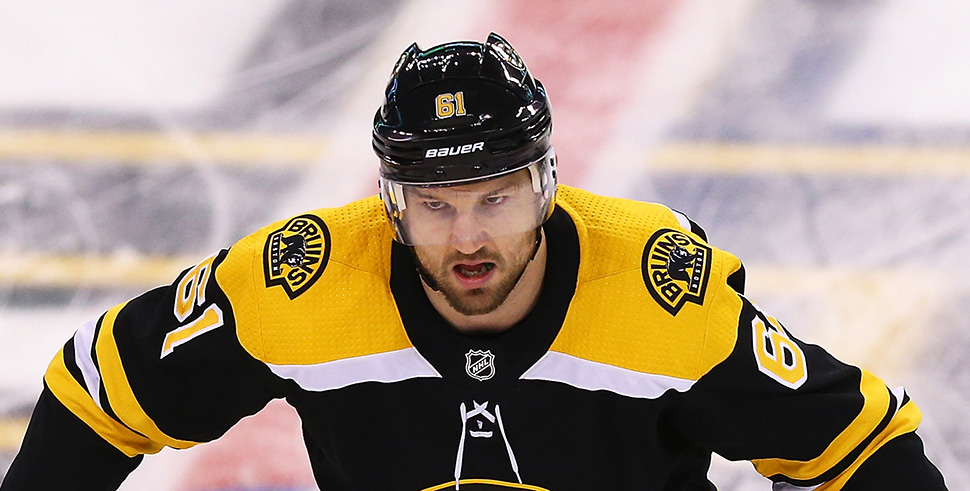 Now that the Ilya Kovalchuk sweepstakes are over and he has signed with the Los Angeles Kings, the Bruins will look to finalize the second forward line, specifically the wing on David Krejci’s right side. Don Sweeney and the Bruins have plenty of options to fill that role, both within and outside the organization.

The Bruins’ major trade deadline acquisition had a tough go in the black and gold, suffering a concussion and only playing a total of 11 regular season games, and all 12 playoff games. In those games, he managed to score 6 goals and add 5 assists for a total of 11 points. Not the best totals in the world, but his concussion and likely slightly rushed recovery must be taken into consideration.

Despite his difficulties in a Bruins uniform, Nash’s bread and butter is scoring goals with his quick release and laser of a shot in the slot. Not merely just a goal scorer, he’s consistently successful at using his large frame to his advantage when it comes to net and board battles in the attacking zone. He’s hard to move off the puck and is a staple in front of the net on the power play.

The decision whether or not to resign Rick Nash is a difficult one considering the many young and talented Bruins that are going to need new contracts next summer and the summer after that (McAvoy, DeBrusk, Heinen, Carlo). Taking into account Kovalchuk’s contract ($6.25 million AAV for 3 years), the ballpark for signing Nash would likely come in around there, probably a little cheaper. If the Bruins can sign Rick Nash for 2 years at no more than $5 or so million a year, chances are they’ll pull the trigger.

However, in the way of a potential return for Rick Nash is him possibly retiring. If he decides to hang up the skates on his career as he has been recently reported to be thinking about, the Bruins will have to look towards youth within the organization or in the trade market.

Staying within the organization is easily the safest and most inexpensive option for the Bruins at second line right wing, and there are plenty of options to choose from. 21-year-old Ryan Donato seems to be the strongest candidate at the moment as he played incredibly well in his 12 games this year, scoring 5 goals and 4 assists for a total 9 points. His NHL debut was particularly impressive, scoring his first NHL goal and adding 2 assists in a 5-4 overtime loss to the Columbus Blue Jackets. The critical factor here is that in his short time in the NHL so far, a vast majority of it has been spent on Krejci’s right wing on the second line. Here are the highlights from his debut (first goal at about 1 minute):

Donato is first and foremost a shooter, he loves to shoot the puck and get to the dirty areas in and around the net to score goals. He’s a young guy with a good head on his shoulders, a lot of skill, a great shot and a lot of experience around the Bruins through his father, former Bruin Ted Donato. The combination of DeBrusk, Krejci, and Donato is deadly as they’ve already shown, and those young guys on Krejci’s wings are only going to get better with time.

Heinen has much more NHL experience than Donato, but not by a large margin. In 85 total games, he’s scored 16 goals and assisted on 31 for 47 points, all in his first full rookie season in 2017-2018. He’s impressed quite a lot and was one of the most successful Bruins rookies this season playing mostly third line time when everyone was healthy. Heinen could very quickly and successfully make the jump to the second line and put up similar numbers, if not better considering he’d be playing with a more skilled center in Krejci.

Heinen is overall a solid 200-foot player, as is evidenced by his use on the penalty kill and ability to score while shorthanded. With his excellent size, skill, and speed, Heinen could only improve and add to the play style that David Krejci and Jake DeBrusk have cultivated this past season. The only thing working against Heinen getting a promotion to the second line are his teammates.

Anders Bjork is an interesting case for the second line. He has limited NHL experience, and although he has played well, scoring 4 goals, 8 assists for 12 points in 30 games, he has suffered a serious injury. This past season he suffered a left shoulder injury which put him out for 6 months. He certainly will get a crack at the roster this coming season, especially if he impresses in training camp, but lining up next to Krejci on a nightly basis is likely a stretch for the 21-year-old.

The long shot of all the Bruins’ options. There have been plenty of rumors around the draft weekend that Jeff Skinner is on the trade block in Carolina. With the recent trade of Noah Hanifin and Hampus Lindholm to the Calgary Flames, it is clear that the Hurricanes are looking to move players in an effort to rebuild. Pursuing a trade is likely low on Don Sweeney’s list of options, as it takes a lot to get a lot in today’s NHL and the focus since he has taken over general manager duties has been to draft and develop. A trade for Skinner would also be difficult considering he has a no-movement clause and has already turned down multiple trade proposals. However, if the Bruins are interested and can make it work, the 26-year-old’s numbers are strong; 204 goals, 175 assists for 379 points in 579 games.

He has an incredible release and smooth hands. Grubauer didn’t even stand a chance on that shot after Skinner sliced through the Capital’s two defenders on the rush. The Bruins have proven scorers in Pastrnak and Marchand, but it is never a bad thing to add a bonafide top 6 scoring winger with a proven track record of 20 and 30 goal seasons. Getting Skinner out of Carolina would likely involve a pick, a strong prospect, and a fairly young roster player, either a forward or defenseman. The Bruins might not be willing to cough that up after missing out on the first round of this year’s draft.

The Bruins have tons of options to fill the open roster spot at second line right wing. They can resign Rick Nash, or look more towards the youth within the organization in Donato, Heinen or Bjork. Don Sweeney could take a chance on a trade for Jeff Skinner and add another scorer. Kovalchuk is off the board and on the way to Los Angeles, and that leaves the Bruins with one less option and makes their decision that much easier.