Boston Bruins: The Salary Cap And Its Implications 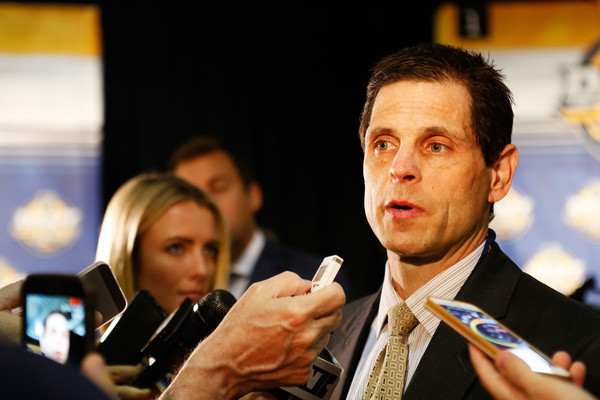 The Boston Bruins have finished their first week of ‘free agency frenzy’, and many fans feel a little underwhelmed. The Black and Gold signed several players that they believed would provide skill and depth to their current roster. The B’s biggest catch so far has been the signing of goaltender Jaroslav Halak, who has been brought on board to back up Tuukka Rask next season.

The B’s also made a splash by signing veteran John Moore to a five-year deal.

While it cost the team several players, the Bruins front office believe they made the right choices as the B’s head into the 2018-19 season.  Bruins general manager Don Sweeney knew that the Bruins had to rebuild the bottom half of their forward core after Riley Nash and Tim Schaller signed with other squads.

“Well, the skating component of all the players we added today, I think, was paramount,” offered Sweeney on the team’s summer acquisitions. “Joakim is a great skater. Wags will be forechecking, he’s real hard on the puck. John, from a recovery standpoint, from getting back on pucks, being able to play against different line matchups in situations for us.

“But overall, I think we have better balance in terms of what we can present each and every night as a matchup for our team.”

The Bruins knew they needed to find strong skaters. They were a major player in the John Tavares sweepstakes, but lost out to the Toronto Maple Leafs.

“I would’ve preferred it not in our division,” said Sweeney on Tavares’ signing with Toronto. “The overall process was a really good process and structural to have somebody else dive inside our own team, and we were thankful for the opportunity to present. [Tavares’ agent] Pat [Brisson] and his group and John himself were really good about it, and he was well prepared, and we felt we were.

“We put our best foot forward and it didn’t fall our way. But, again, to be in that situation is something that our group should be happy about…. it’s, obviously, a reflection of our current players and a testament to them….it’s a reflection of our entire organization.

No matter what happens, there will be Bruins fans who believe the front office failed because they couldn’t get Tavares.  Still, the B’s missing out on Tavares might have been a blessing in disguise. The Bruins would have spent an awful lot of money on a single player. That would have forced the B’s to dump a player or two at a discount price in order to stay underneath the cap.

Factoring in all the choices the Bruins have made, the B’s still have just under $3 million left to work with. The Black and Gold still have a little room to manuver and they might pick up a couple of two-way players just before the B’s start training camp in September.

There are a few things that are out of the Bruins control when it comes to the salary cap. The B’s have to deal with the retained salary of Matt Beleskey and the buyouts of Dennis Seidenberg and Jimmy Hayes.  Those three players levy a four-million dollar hit against the cap ($3,933,334).

The Bruins will still have to deal with Seidenberg and Beleskey next year, and that three-million dollar hit will certain have ramifications as the team tries to keep the youth movement going in the 2019-20 season. The B’s will also have to juggle several of their entry-level players and that will cause problems for the team.

If the Bruins are looking to find anyone else, they’ll have to make some kind of move with their remaining roster. That means at least one defenceman could be moved. While a lot of people believe that Torey Krug is the player most likely to be moved, it seems unlikely that the B’s would give away a player that put up 60 points last season.  Fans should expect to see some kind of deal that sees Kevan Miller or Adam McQuaid being moved off to another squad before the start of the season.

The Bruins have made responsible choices during this offseason. While they weren’t able to bring some ‘A-list’ players to the TD Garden, they’ve been smart about their moves. Don Sweeney hasn’t repeated the mistakes of Peter Chiarelli, and that’s a good sign for the Black and Gold as they get ready for the start of the season.