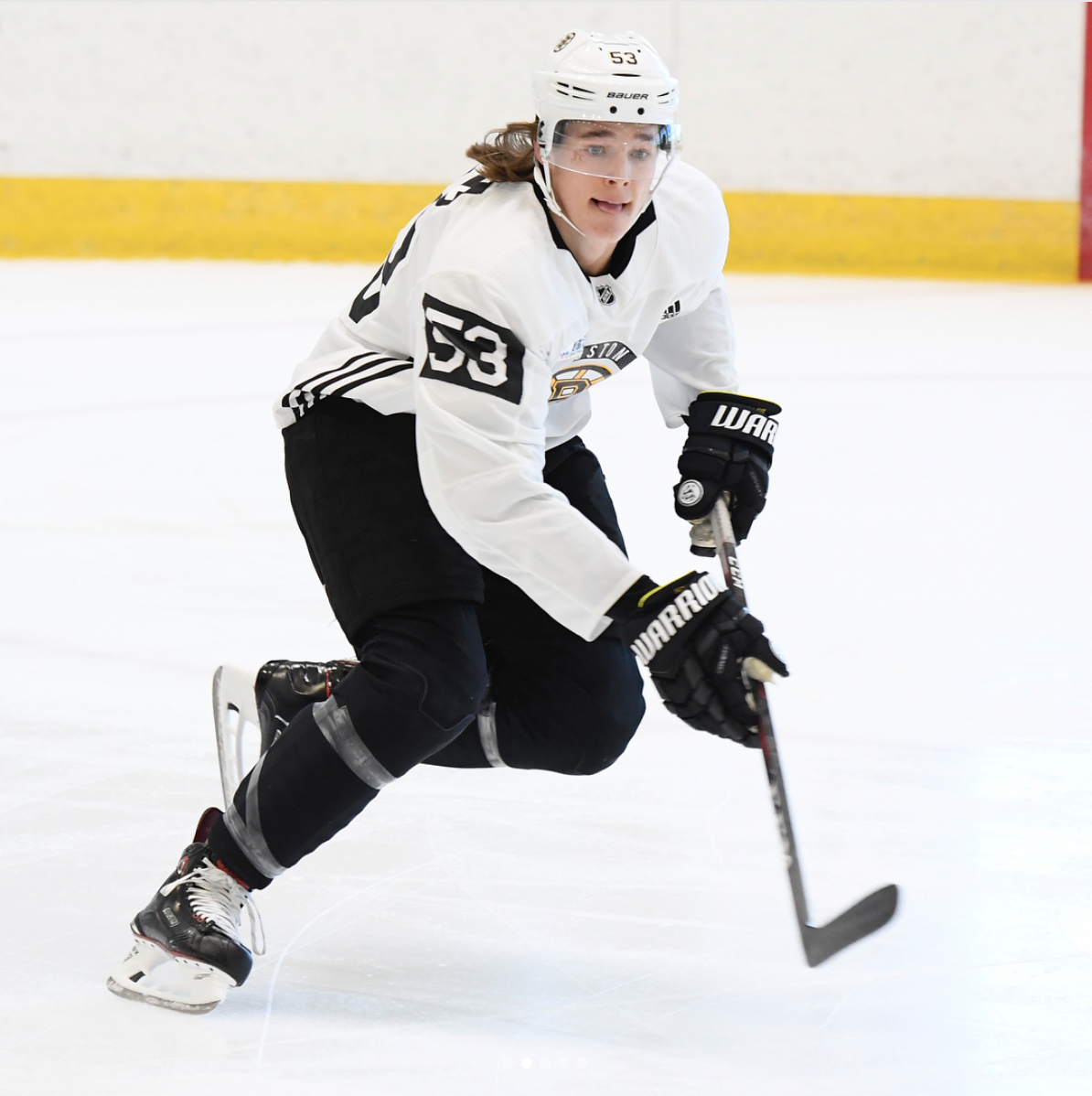 With their late 4th round pick in this year’s NHL Entry Draft, the Bruins selected center Curtis Hall, a Princeton, New Jersey native currently playing in the USHL at 119th overall. At only 18 years of age, Hall has a man’s body, coming in at 6’2″ and 200 pounds. Here are Hall’s first words as a Boston Bruins draft pick:

Curtis Hall would like to say hello. #NHLDraft pic.twitter.com/BtsQDSbcit

Hall has committed to Yale for the coming school year, which in of itself shows that he’s a smart kid with a strong work ethic off the ice. It is a very convenient situation for the Bruins to have Hall playing right in their backyard as well. It’ll be interesting to see how he competes and the numbers he can put up at the college level. This past season he put up 13 goals and 18 assists for a total of 31 points in 54 games with the USHL’s Youngstown Phantoms. Those numbers are a significant improvement over his 7 goals, 14 assists, and 21 points in 59 games the year before in 2016-2017.

Hall won’t be seen as an incredibly highly skilled player which his numbers reflect, however he chips in strongly on offense, but focuses mainly on playing a consistent, 200-foot game. After being drafted, the American described himself by saying, “I’m a hard working two-way centerman. Coaches can rely on me in all areas of the game. I have offensive ability, but I can play really good defense as well. I’m a 200-foot forward.” That description is very comparable to many other current and former Bruins centers. His ceiling likely isn’t as high as that of Patrice Bergeron’s, but his game is clearly reminiscent of the the 4-time Selke Trophy winner’s. Curtis Hall could also be compared to a guy like Rich Peverley, strong in his own end and can chip in offensively at the same time without compromising defense. Hall looks to have a ceiling of a very strong 3rd line center, and very likely could be a top 6 center behind Bergeron if his development goes well. Regardless of his skill and ceiling, his lettuce is absolutely unreal. as is evidenced below in exhibits A, B, C and D:

Hall impressed quite a bit at the Bruins Development Camp this past week. He was able to effectively use his frame to create space for himself and his teammates, including in the dirty areas in front of the net. With that size, he should be able to push a lot of other guys around at the NHL level when he’s given a chance. He’s a guy that wants to get in there to make a difference in a game, and as our favorite Bruins broadcast team Jack Edwards and Andy Brickley would say, “he’s got jam.” Another of Hall’s strengths is his skating, and he knows it. He knows what his strengths are and how to properly use them to his advantage to best his opponent. He seems to have a strong shot from what could be seen throughout the on-ice sessions of development camp, and he especially showcased it during the scrimmage on Friday:

Not only is the shot itself impressive, being from a very tight angle, top shelf and the puck being positioned on the outside, but so is the work required to get the opportunity. He uses his size, speed and agility to beat the defender on a spin move which creates the space he needs to drive towards the net. His quick acceleration on a few strides from a slow speed affords him that scoring chance. Some guys in this same situation would’ve backed off and stayed on the boards or rotated out to the point, but not Hall. It could be guessed that Hall wouldn’t always shoot that puck if he had a man open right in front of the crease. Despite him scoring on a beautiful finish on this play, the most critical part is the decisions he makes leading up to that finish. It shows Hall has a strong hockey IQ that can be improved and heightened on his journey through professional hockey.

🎥2018 fourth-round pick Curtis Hall at #BruinsDevCamp: "I'm gonna work as hard as I can when I'm out there." pic.twitter.com/W9ISP1BQJn

After day 2 of development camp Hall gave the interview above, and there’s a lot to like about it. He’s confident in his game and the way he plays, which is huge in professional sports of any kind. Having that good head on his shoulders gives him a great chance of success at the NHL level. He’s calm, cool and collected, he’s respectful with the media and wants to jump right in and communicate well with the organization and his teammates. These are all good signs to see from a young guy less than a week after being drafted. The strongest sign I saw during camp was his work ethic. On that third day of camp, he was one of the last few guys off the ice. He stayed out there to get those extra few shots, strides and stickhandling in. Being one of the last off shows that extra dedication and want to improve.

Hall is committed to improving his game, and that has to make the Bruins management and coaching staff very happy with their 119th overall pick in the 2018 NHL Entry Draft. The Bruins might have a long-term top 9, hopefully, top 6 center on their hands in Curtis Hall. He’s got the heart, work ethic, strong body/head, and he’s got some unreal, majestic flow. Welcome to Boston, Curtis!