Bruins Vladar Is Ready For Full-Time Role In Providence 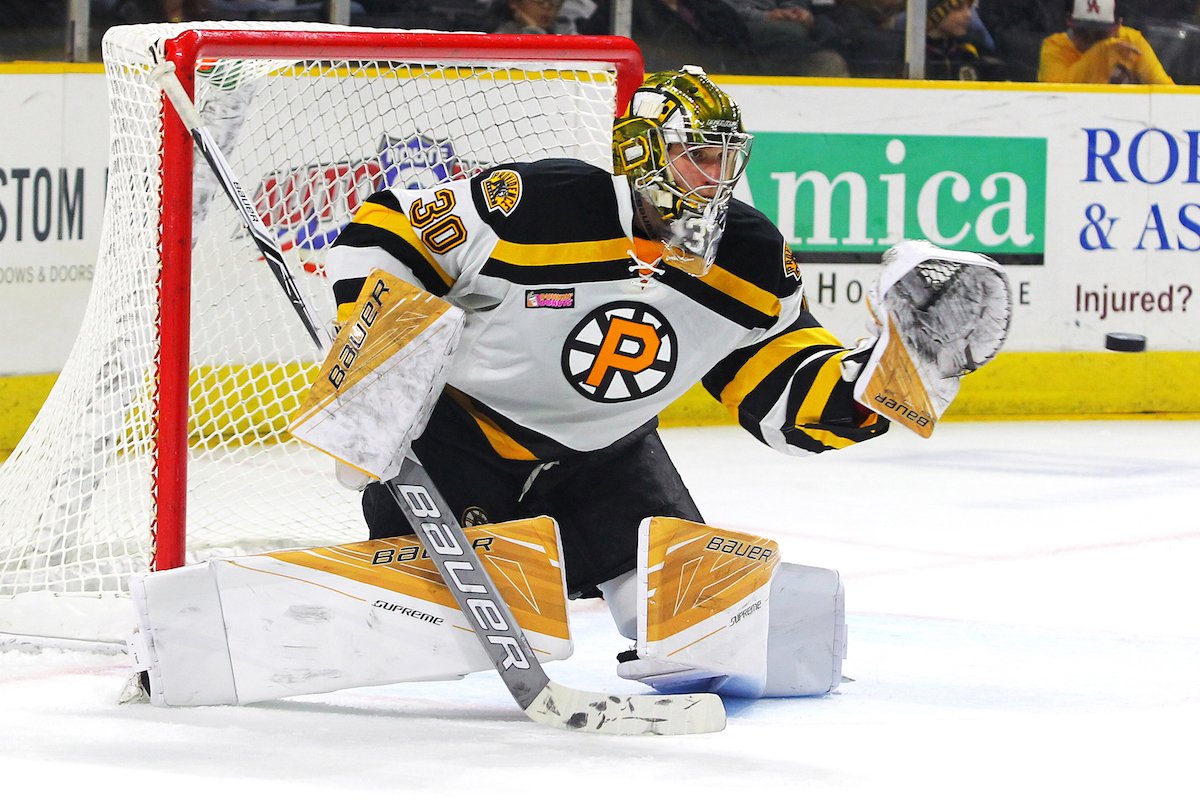 Last season the American Hockey Leagues Providence Bruins agreed to accept goaltender Jordan Binnington on loan from the St. Louis Blues organization because the team from The Show Me State didn’t have a top minor-pro affiliate throughout the 2017-18 campaign. For the upcoming 2018-18 season the Blues new AHL affiliation will be with the San Antonio Rampage and all team players that were scattered around North America in search of ice-time for one season will be welcomed back to the organization with a new home in the great state of Texas.

With news of the Blues developing youth and depth veterans returning, yesterday the St. Louis team announced that they’ve agreed to a one-year, two-way contract worth a reportedly  ( Unconfirmed per Cap-Friendly ) $650K at the National Hockey League level. While on loan playing in Providence, the 24-year-old Binnington appeared in 28 games for the B’s posting a 17-9-1 record, a 2.05 Goals-Against-Average, and .926 Save Percentage working with depth netminder Zane McIntyre.

The Blues have agreed to terms with goaltender Jordan Binnington on a one-year, two-way contract. https://t.co/vbGr7kzohQ #stlblues

The departure of Binnington back to the Blues organization creates a fantastic opportunity for Boston Bruins prospect goaltender and 2015 third-round draft pick Dan Vladar. The 6′-5″ 185-pound netminder has spent the first two seasons of his minor-pro career with the Bruins “AA” minor-pro affiliate the Atlanta Gladiators of the ECHL after signing his three-year, entry-level contract in April of 2016. Atlanta was a great place for the now 20-year-old Vladar to learn the pro game as both goaltending positions were occupied at the higher AHL level in Providence.

In 59 games with the Gladiators team, Dan posted a record of 22-27-2, a 3.42 GAA, and .899 Save% but his time in the AHL with the Baby B’s has been impressive when called upon for emergency coverage. With Vladar’s limited time with Providence, he’s shown he can handle the higher competition and step up when needed with a better-structured core in front of him over the lower-level ECHL Atlanta franchise. In 12 AHL appearances with the B’s spanning over two seasons, he posted a 6-2-1 record with an impressive 2.42 GAA and .922 Save%.

When it comes to ranking the goaltending depth, I can see Vladar taking a huge step in his development in the upcoming AHL season and be given more time in the crease over future teammate Zane McIntyre. The 25-year-old McIntyre has one-year remaining on his current two-year deal and will most likely be the last year in the Bruins organization as netminders in the developing systems below will seemingly push him out of the picture and that roster spot may be needed for continued progression forward for a younger player such as goaltender Kyle Keyser who will spend at least another season in the Ontario Hockey League with the Oshawa Generals.

🎥Watch as @DanVladar takes over the microphone to ask his fellow prospects the hard-hitting questions: pic.twitter.com/9ZhsV4lTqD

McIntyre, who was drafted in the sixth-round of the 2010 NHL Entry Draft has played at the AHL level for three seasons now and has a record of 61-29-10 and a 2.41 GAA and .914 Save% in 109 career games. His best season with Providence came in his second season in the league (2016-17) when he posted a 21-6-1 record and took home AHL All-Star game recognition and the Leagues best goaltender when it came to save-percentage. His ability to perform at the NHL level is most likely the reason why the organization is preparing to move on from his talents as he’s only appeared in eight games posting a 0-4-1 record and hasn’t seen the ice at the highest level of hockey in the world since the 2016-17 season when he was called up, and former Bruins backup goaltender Anton Khudobin was sent down for his season-long struggles.

🎥B’s goalie prospect Dan Vladar on the camaraderie at Development Camp: “Nothing better than doing this together.” pic.twitter.com/1zLZfsGKXZ

It’s hard for me to calculate just when a goaltender like Vladar is going to make an impact in the NHL, especially with starter Tuukka Rask under contract for another three seasons and the recent free agent signing of veteran netminder Jaroslav Halak for two years is an interesting predicament. A young goaltender like Vladar needs the benefit of playing more games and with the upcoming hockey season being the last year of his entry-level contract, I can see the Bruins organization take the approach like they did with McIntyre and sign him to a two-year, two-way extension and reevaluate the situation. Vladar is certainly a work-in-progress, and it remains to be seen if he can be the next netminder to take over as a franchise player if in fact Rask is not extended past the 2020-21 season.

Dan has a great attitude on and off the ice and has certainly gained the trust throughout his development from Bruins management who’ve spoken highly of him at every development camp he’s attended since 2015. Vladar had this to say in an article ( CLICK HERE )by Boston Globes Matt Porter at last week’s development camp from the Warrior Ice Arena in Brighton, Massachusetts. “I feel like I’m where I’m supposed to be, whether it’s in Atlanta or Providence or here for the playoffs,” said Vladar, who served as Boston’s third-string emergency goalie for Round 2 of the playoffs against Tampa Bay and did not see action. “I feel comfortable everywhere. I just try to stop the puck. That’s all that matters.”