How A Breakup Of The Top Line Could Benefit Bruins 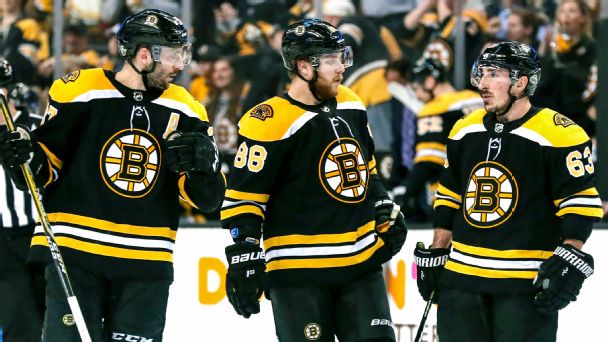 There’s no question that the Boston Bruins are a top-heavy team and that can be a good thing. We saw the group of Brad Marchand, David Pastrnak, and Patrice Bergeron put together a combined 228 points this past season, an astounding 32 percent of the Bruins offense. That’s nearly a third of the Bruins points coming from just one line. Now one way to look at it is that the Bruins have an elite first line and one of the best first lines in the entire league. These three guys can play against any top defensive pairing in the league and can single-handedly take over games on any given night.

The team often went as the top line did especially in their first-round playoff series this past spring against the Toronto Maple Leafs. In the three games the Bruins lost, the top line failed to score a point. However, in four Bruin victories, the trio combined for 30 points, scoring nine goals and totaling 21 assists. The first line especially stepped up in Game 7, putting up 3 goals and 4 assists in the 7-4 victory. There’s no denying that at their best, this line is one of the if not the best line in hockey. By no stretch of the imagination would one break up that line because they need to be better. Breaking up the first line could potentially make this Bruins team even more dangerous.

First off, let’s just say that there’s no chance that Marchand or Bergeron would be moved off the first line. The two of them play off each other so well, I’ve personally never seen anything like it. Any time that two-thirds of your top line plays on a line with Sidney Crosby, you know that’s a damn good line, and you’d be a moron to break those two up. They play together in nearly every situation, and there would be no reason to change that at this point. The duo of Marchand and Bergeron has helped the development of David Pastrnak who has recorded 70-plus points the last two seasons and has established himself as one of the elite point scorers in the league. With how well Pastrnak has done over the last two seasons it could be considered a demotion if he were to be taken off the top line. However, with Pastrnak being such an elite scorer, he should be able to produce like one no matter who his linemates are.

Pastrnak is terrifying. He’s got every kind of shot, can score with all of them, and peppers shots on goal from all over the zone. pic.twitter.com/mPJMeF5XGB

Again, this article isn’t advocating that the trio should be broken up because of poor performance. It’s merely providing another option for the Bruins offense to possibly become even more of a deadly weapon by spreading out their scoring. By having one line that produces most of your offense, teams will focus to shut down that line because they’ll know that the other lines might not be as prolific. Rather than having one line that puts up most of your scoring, why not have two lines that can be equally strong so that teams can’t focus on just one group? Moving Pastrnak down to play with Jake DeBrusk and David Krejci would make the second line exponentially more dangerous with an elite goal scorer such as “Pasta.” Giving Krejci the elite goal scorer he’s coveted would elevate his game and would allow the Bruins to have another playmaking center to take pressure off of the bottom two lines do not need to score as much. Instead of dealing for Artemi Panarin to play with Krejci which would most likely cost a fortune, why not give Krejci an elite goal scorer to play with that’s already on your roster?

If Pastrnak were to be moved down to the second line, a bevy of candidates could take his place to keep the first line as effective as possible. Let’s look at a few:

Danton Heinen: The 116th overall pick back in 2014 had a tremendous rookie season with 16 goals and 31 assists in 77 games last season. He also played in eight games in 2016-17 but failed to record a point. Heinen seemed to fit fairly well on a third line with Riley Nash and David Backes for most of the season and is a player you can rely on in the defensive zone. Scoring-wise he may not be an ideal fit on the first line, but in this humble hockey writer’s opinion, he could fit nicely with Marchand and Bergeron.

Ryan Donato: The 22-year-old former second-round pick burst onto the scene in Boston last March with four points in his first two games and finished the season with nine points in 12 games. With his ability to shoot, he could be a force on the first line with Bergeron feeding him passes. However, he made need some seasoning in his own end which was somewhat of an issue for him last season. Playing with a four-time Selke winner though could be the perfect medicine for Donato to become more of an all-around player.

Anders Bjork: Another 2014 draft pick, Bjork had his season cut short after just 30 games in Boston due to shoulder surgery. The Notre Dame product seemed to be a forgotten man this summer with how all the young players did last season, but this guy is arguably the most talented out of all of them. Bjork actually began last season playing on the top line, but it didn’t last too long as he struggled quite a bit. With a good training camp and preseason, he could easily end up back on the top line ready to produce like a first line winger.