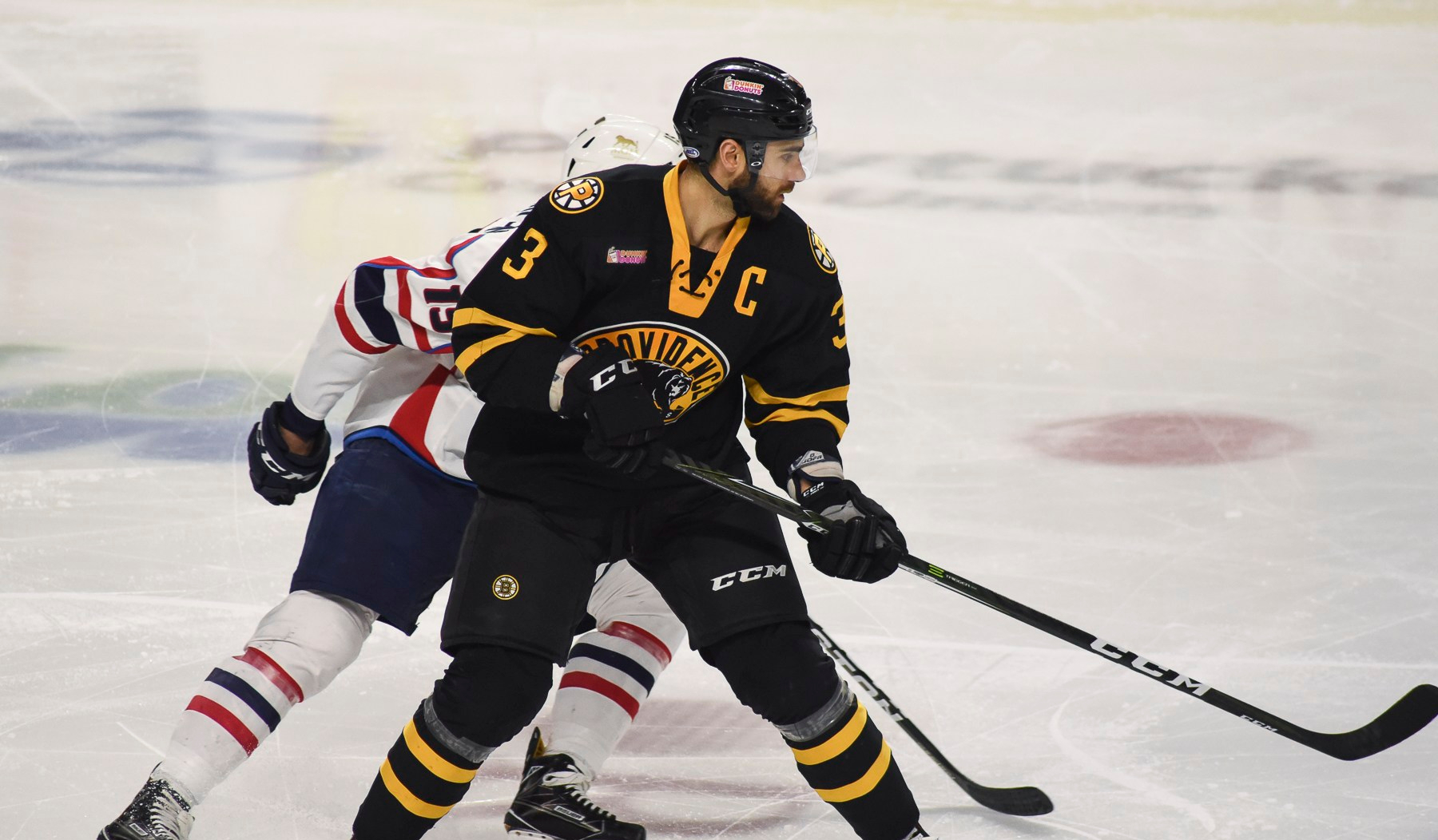 A ‘C’ may bring cool refreshing air to mind in these, the hot and hazy days of summer, but for the Providence Bruins faithful it pokes the still tender bruise left from the loss of our beloved Captain, Tommy Cross. In hockey, unlike other sports, a captain is not just a player with a particular title, he is a mentor, a leader, a defender, and a mediator.  The one who sets the tone both on and off the ice. So, before I go on to give you my take on who may be on the horizon as our new capital-C, Captain, allow me to wax poetic a moment about what Tommy Cross has meant to Providence, both the team and the community.

Donning the ‘C’ for three consecutive seasons, longer than any other captain in the team’s history, Tommy Cross led Providence both on and off the ice.  He mentored the young players, always willing to sit down for a chat or spend a moment just listening if that is what was needed.  With a level spirit and a casual air, he aimed to put his teammates at ease and create that bond that drives a solid club. Cross attributes his leadership success to being himself, to modeling a hard work ethic and to being happy.  In an article for the Providence Journal, written shortly after Cross was named Captain in 2015, Mark Divver quoted him as saying “I look back on some of the guys that have been leaders here while I’ve been here… … they were themselves. It’s important to be yourself, bring your own attributes to the table.” While in a more recent interview with GottaLoveCTHockey Cross confirmed he still believes this to be the best policy stating, “There’s a need for different types of leaders, and it’s important to be who you are and not change.”

Apart from being a real leader in the locker room, Cross has been a stable and productive team player on the ice.  Driving the team to not rely on the highs or dwell on the lows, but to play a consistent, solid, and steady game throughout.  Living by this mantra, Tommy played 73 of the 76 games in the 17/18 regular season posting numbers of 8-28-36, preceded by a 16/17 season in which he played 74 and posted 12-23-35.  On top of that consistency, he was recognized as the P-Bruins all-time leader in games played having skated in 362 regular season play, and 43 postseason match-ups.  Numbers like these speak volumes for the coaching staffs’ confidence in his abilities and his mental and physical fitness on the ice.  Not one to drop gloves at the tip of a stick, Tommy found the right way to defend each one of his teammates.  He had the mellow demeanor when necessary to consult with official and convey his message without escalating the situation and the tenacity to draw the hard line with an opponent who refused the gentle touch.   It’s this ability to differentiate situations that made him as valuable an asset as any.

For a third straight season, @TCross4 was the captain of the P-Bruins and continued to take on more responsibility. Read more about Cross and the year he had in this edition of the 2017-18 Season Review https://t.co/2bxbD5k08g pic.twitter.com/dW88LilUHW

Cross once mentioned that part of being a successful leader is being a good teammate and a good citizen, admitting that it’s something we always must work on because no one is perfect.  Well Tommy, you certainly gave it your all.  He never let his leadership end at the locker room door, encouraging his teammates to be active members of the Providence community, modeling the good citizenship he strives for.   Every year he took part in the Providence Bruins Fan Clubs charity events, helping raise thousands of dollars that were donated directly to the Special Olympics of Rhode Island and the Hasbro Children’s Hospital.

The annual Holiday Toy Shopping Event at Walmart felt his presence as he and teammates not only helped lead the event but participated in making charitable donations and even making sure that thousands of dollars’ worth of toys were given to families in need.  The Tomorrow Fund and The Military Appreciation Night were two more of many charitable and humanitarian organizations that Tommy felt honored to serve.  The big heart reflected in these deeds did not go unnoticed, as in both the 2016-17 and 2017-18 Tommy Cross was named the IOA/American Specialty AHL Man of the Year.

These combined are the things that make a great leader, these are the things the make a successful Captain.  A captain does not have to be the top player, the leading scorer, or the star.  He must be willing to be true to himself, to be available to others, and to put the team before the self.  Having said all that, we will miss you, Tommy!  The Baby-B’s Next captain has some big skates to fill.

Tommy Cross signs with the Blue Jackets. Weird to see him gone.

Even now the game must go on and preferably… with a Captain. Providence has a roster stocked with everything from fresh-faced cubs to seasoned burly bears, and a fundamental decision has to be made.  Who is the right team member to take on that all-important role and feel the full weight of the ‘C’?  In my opinion, there are only 2 real options; Chris Breen and Colby Cave (and no it’s not because they are gingers).  Both have served as Alternate Captains in the last few years, so they both have had a small bite at the apple.  The answer really lies in who has made the most out of that little taste?

Let’s take a quick look at each of them. 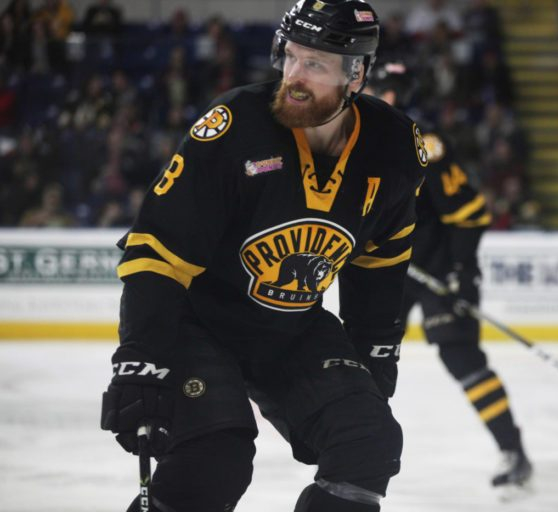 At 6’7” 224 pounds defender, Chris Breen is a Giant on the ice.  The 29-year-old Ontario native began his career with 5 years in the OHL.  Un-drafted, he fought his way into a tryout spot with the Stockton Heat landing a full-time slot on their roster for 4 years stepping up to Calgary Flames for 9 games in the 13/14 season.  Signing a one-year two-way contract in 2014, Breen made his debut with Providence on October 10, 2014.  Since then Chris came up with 5 goals and 33 assists in 217 regular season games.  His play is excellent, and he has an incredible reach which is great for breaking up lanes and preventing scoring opportunities.  He’s not the fastest on the ice but is able to stretch his long frame to make up for the bit of lag on his transitions.  Perhaps my favorite quality in Chris Breen (besides his amazing beard) is he is unstoppable, you will know he hit you!

Off the Ice, it is hard to find much on Chris Breen.  I have not seen him at many Providence Bruins Fan Club events, and I don’t see much about him online regarding community involvement.  I am not putting him down for this.  Each person has their own skill set, maybe public events are not his thing.  Just to mention Cross one more time, he reminded us there is a place in this world for all kinds of leaders, you need to be true to you. 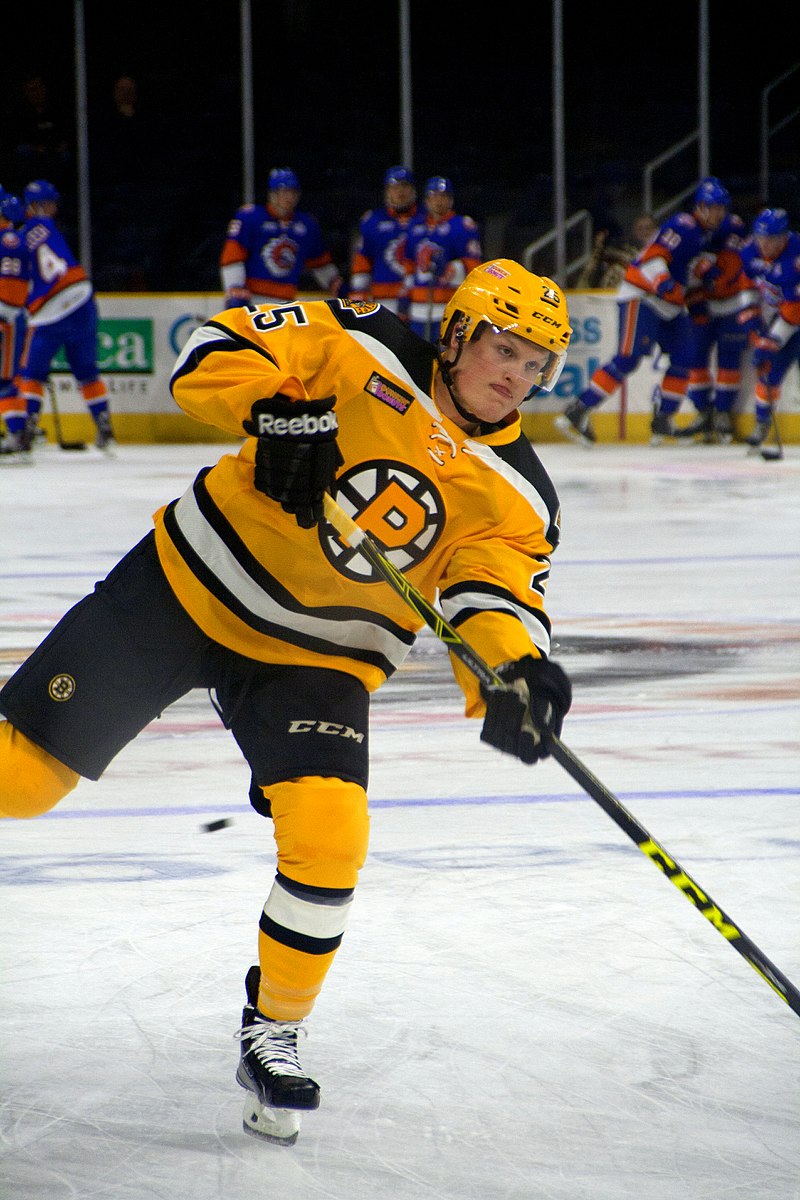 At 6’1” 190-pounds, Center Colby Cave is a force on the ice.  The 23-year-old Saskatchewan native began his career playing four seasons in the WHL with the Swift Current Broncos serving as their captain in his final season there.  Signing with the Bruins in 2015 Cave made his debut with Providence at the end of the 2014-15 season.   In his three full seasons with Providence Colby has played no fewer than 72 games per campaign including suiting up for every single game in the 16/17 season. His numbers were equally impressive at 37-60-97 in a total of 223 regular season games.  His play is very fluid, and he has an innate ability to position himself in front of the net for the touch or rebound.  At the same time, he’s defensive-minded consistently looking to break-up oppositional plays before they can get going.  His dig in the corners is aggressive but not reckless, and my favorite quality is that he always comes out of a ‘dust-up’ with a smile.  They may get under his skin, but he doesn’t let it show.  These skills on top of winning 3 of the 4 faceoffs he took in Boston prove he has the focus and flexibility to address many different situations.

Off the Ice, Colby Cave’s Twitter account is a running thread of support for his community back home, organizations his loved ones’ support, and those he supports himself.  On the big, old, world-wide-web there is not much information on his community activities.  However, he has been active with many of the Providence Bruins Fan Club events and charity gatherings.  I had the opportunity to see him interact with a young fan at the most recent event this past May and they had a great conversation. He seemed genuinely interested and was not in a hurry to rush off.  Colby has a community-minded leadership approach and appears to be very willing to mingle with the fans.

Numbers and attributes out on the table, Breen and Cave both have played around the same amount of games, so that is a wash.  Breen is a few years older, but does older mean better for a Captain? It could go either way.  Cave appears more personable, but does that make a better Captain?  Depends.  Honestly, it’s a judgment call, okay it’s always a judgment call, but this is the call I make and why.

I chose Colby Cave.  I picked him for three reasons.   First, from everything I have seen Colby has shown leadership potential from way back in the juniors.  He was named Captain of the Swift Current Broncos, and it was said then that the energy and direction he had just seemed to flow to everyone else on the ice.  That is not something you can teach.  Second, his ability to adapt.  I have the impression from watching him on the ice and seeing him interact with people off the ice that he is comfortable in his skin.  He can be himself and make everyone feel they belong.  He doesn’t need to be the star, he just wants to be sure everyone is at their best.

Lastly, perhaps the most tangible reason of the bunch, his numbers.  They don’t lie.  Seriously compare his numbers year over year. Colby has shown the consistency that makes me believe he has the bandwidth to take on the added responsibility of being a leader.  Like I mentioned at the top of the piece Captain is not just a title in ice hockey, it’s a role.  So, to take on an additional role, you must be a consistent and level player.  I feel Colby has these characteristics and would make an excellent Captain.

That is not to say Breen was not an option.  There is only one reason I did not choose him, and it has less to do with him than you would think.  The defense in Providence is overall so young that they need a more prominent guiding force with them, dedicated almost.  If Chris Breen took on the role of Captain, he would need to spread his guidance out to the whole team, making his ability to impact the defensive team significantly less.  I do not think Chris Breen would be a bad Captain, but I do think his guidance is needed more elsewhere.