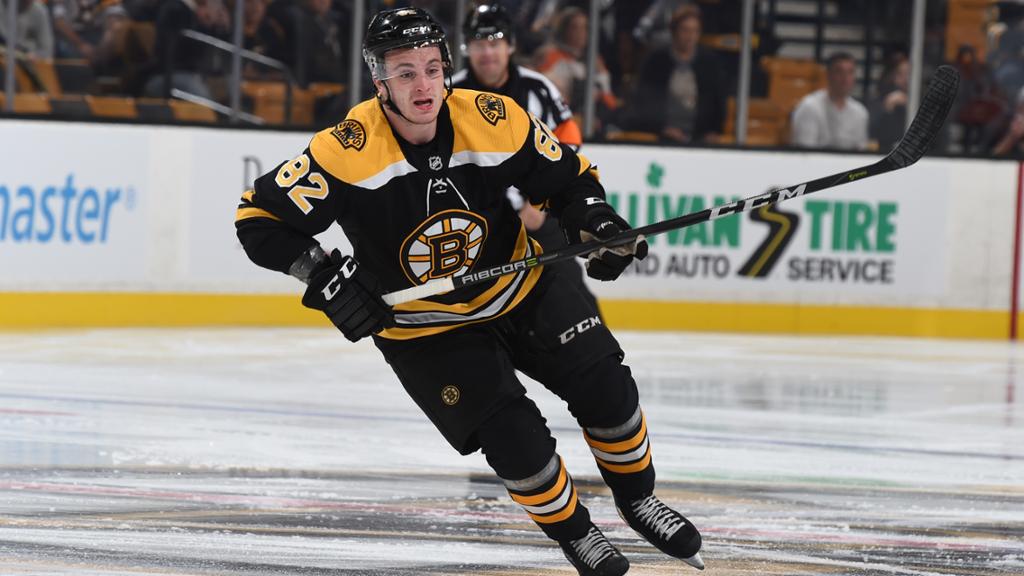 At the 2015 National Hockey League Entry Draft from Sunrise, Florida the Boston Bruins selected ten times in the seven-round event to replenish the prospect pool orchestrated by first-year General Manager Don Sweeney. Regardless of popular opinion about how this franchise has drafted lately and who the club could’ve had, I believe in the process of developing and retooling properly while being patient. Many hockey fans have seen late round selections go on to have successful NHL careers and I believe the B’s have one in Saskatchewan, Canada native Jesse Gabrielle.

The 5′-11″ 205-pound left winger has been a pleasure to watch throughout his Canadian Junior career before joining the American Hockey League’s Providence Bruins prior to the 2017-18 campaign. Watching his game and skill set making the rounds in his Western Hockey League career making appearances with the Brandon Wheat Kings (84 Games), two tours with the Regina Pats (60 Games), and the Prince George Cougars (133 Games). The now 21-year-old Gabrielle has a serious chance to make some noise over this offseason assuming he’ll be fully recovered from an injury that held him out the 2018 Mastercard Memorial Cup festivities that were held in his return to his Provinces Capitol of Regina, Saskatchewan.

After starting his first full year of pro hockey in Providence, Jesse didn’t meet the expectations set for himself nor the top minor-pro affiliates management team. After 21 games and four points with the Rhode Island club, he was sent back to the Canadian Juniors in the WHL after his rights were traded from Prince George to Regina. In 27 games for Regina last season, Jesse contributed 19 points in the regular season and zero points in two games in the playoffs before succumbing to his injury calling it a year. As Player Development Coordinator Jamie Langenbrunner said at this year’s development camp from the media room at Warrior Ice Arena, players of Gabrielle’s and later draft classes were granted camp graduate status and didn’t need to attend the annual event.

In my opinion, this offseason Jesse has a lot to prove to management and he’ll challenge for roster spots in either the NHL or back in the AHL with camps starting up in September. Where Gabrielle plays in the pro hockey levels is totally up to him but going back to play in junior hockey won’t happen as he’s not eligible for a return. I would have to say that a full season in the AHL with Providence would suit both sides fairly, but would have to see him not be ready for that opportunity and go down a level in the ECHL with the Bruins Premier “AA” minor-pro affiliate the Atlanta Gladiators.

I know he’s an unproven commodity in the AHL but I always have to look back at his WHL career where he posted 228 points in 277 games and believe he certainly has the talent to stay with Providence for the upcoming 2018-19 AHL season. Take a look at the video below for a small sample size of his offensive capabilities.

Gabrielle compares his game to current NHL Bruins forward Brad Marchand and even said so in an interview with BostonBruins.com’s  Eric Russo back in September of 2017 when Jesse was in town for training camp. Gabrielle had these things to say below and can also be traced back to the original article that Russo wrote HERE.

“I try to learn from him,” said Gabrielle, who is entering his first pro season after notching 35 goals and 29 assists – to go along with 88 penalty minutes – in 61 games for Prince George of the WHL last season.”

“He’s my favorite player and I try to emulate my game after him. I just try to be a sponge around him. When you can watch him play and experience it and have him on the bench….I’m just trying to be a sponge and learn from him.”

“It was fun up until you get over that line just a little bit,” said Gabrielle, who had two shots on goal in just over 10 minutes of ice time against the Flyers, while playing on a line with Riley Nash and Noel Acciari.

“The whole game it was going good. I was getting underneath a lot of their guys’ skin. A lot of NHL guys were coming after me and it was a lot of fun. Like I said, it’s just a learning experience. You live and you learn. It’s not going to happen again.”

“I went up to [Marchand] after the game and talked to him about it,” said Gabrielle, “and he said, ‘You just got to find that line.’ He said, ‘You’re going to get caught sometimes and you just got to learn from it.'”

Brad Marchand had these things to say about Gabrielle’s game also in Russo’s article seen below.

“For sure, especially early on,” Marchand said when asked if he saw similarities between himself and Gabrielle. “He’s doing whatever he has to do to open some eyes and make a name for himself and he’s good at what he does. He had the whole team [the Flyers] hating on him. He had a couple 2-on-1 opportunities, almost scored a goal. He did everything that he was supposed to do.”

“I was the same way coming up. You just try to find your little niche that makes you different from other players and he definitely has that.”

Bruce Cassidy also chimed in on Russo’s article on Boston Bruins.com giving his personal evaluation of the gritty, speedy winger.

“Gets on top of pucks and disrupts the forecheck, very similar to March,” said Cassidy. “He’s got a good shot. He wants to be an agitator, so it is a good comparison. It’s a little premature, but for Jesse – for anybody – it’s a good player to emulate, a guy that fought his way out of the American Hockey League to the NHL, played on a lower line and worked his way up and just wouldn’t be denied. Definitely a good role model for him.”

“It happened in Development Camp, so here’s a guy who walks on the edge, and I thought played a very good hockey game [Thursday],” Cassidy said of Gabrielle. “At ice level, he had a few other guys frustrated. If that is what makes him tick and he can stay on the right side of the line, then we’re OK with it.

“But clearly he crossed it [against the Flyers]. I think if as a young guy, you try to take on the officials in the National Hockey League, you are going to lose, and he lost tonight.”

Below is a 2014 scouting report provided by Elite Prospects writer Curtis Joe.

A gritty winger who plays with an edge and has a nose for the net. Plays an agitative style and is very effective on the forecheck. Possesses good skating ability and is able to evade larger opponents with ease. All-in-all, a scrappy, skilled winger that can be difficult to play against.