Boston Bruins: The Origin Of The Core 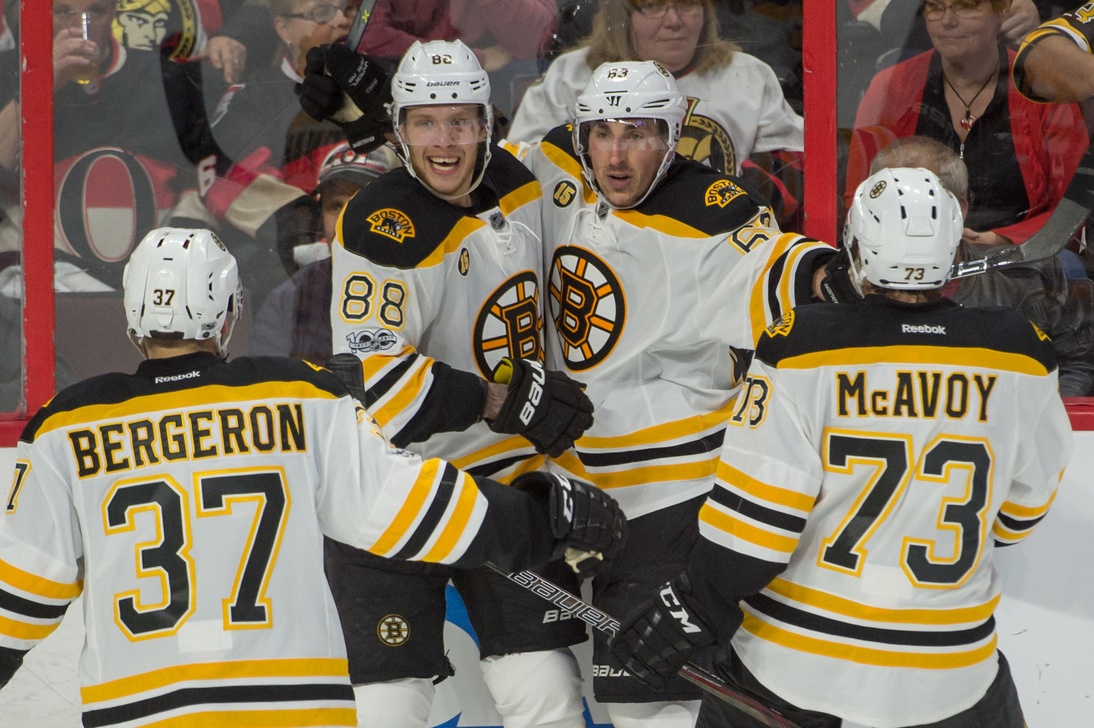 Every professional team in any sport has a group of players on their roster that is named the “core” of the team. The National Hockey League is no different and for a veteran organization like the Boston Bruins, the core is arguably the best group of players on the team. The core of a team normally remains intact until they retire. Very rarely do you see or hear about a trade involving a core player of the team.

If someone asks, “Who is the core of the current Boston Bruins?” it would not be too difficult to reply. Patrice Bergeron, David Krejci, Brad Marchand, Zdeno Chara, and Tuukka Rask are just the most common names that come up. Recently, however, names like David Pastrnak, Torey Krug, and Jake DeBrusk have been added to the mix of near-untouchable players on the Bruins roster.

Between the years of 2008 and 2014, the core of the Boston Bruins was a threat every time they took the ice, and the entire league knew about each and every one of those core players. A Stanley Cup win in 2011, a Stanley Cup Finals appearance in 2013, a President’s Trophy in 2014, and six straight Stanley Cup Playoff appearances, (seven when including the 2007-08 season) had the Bruins well known. Unlike some teams, the core of the Boston Bruins for that near-half-decade were not all “good players.”

Of course, guys like Bergeron, Marchand, Krejci, Chara, and Rask were still there and striving, but the group was even larger than that. Milan Lucic, Shawn Thornton, Nathan Horton, and Marc Savard had some important, franchise-changing moments throughout their time with the club, especially between ’08 and ’14. Moments such as these:

Nearly every Bruin fan is quite aware of these moments, especially due to the fact that they happened so recently in the history of the franchise. But not every one of these infamous moments came to the Bruins via the NHL Entry Draft. In fact, a few of the players mentioned below were traded for or signed in free agency. 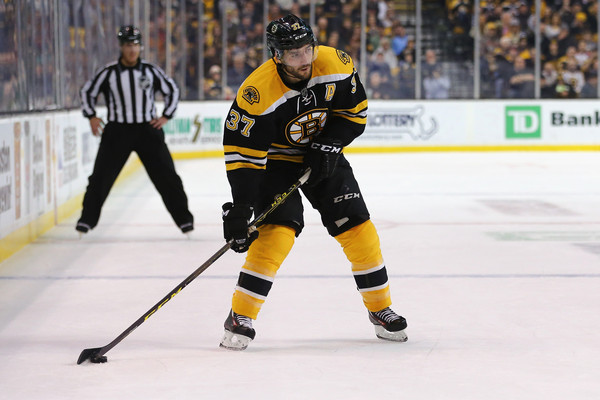 Need I say anything else? Patrice Bergeron is a near-guaranteed Hockey Hall-of-Famer and will most likely have his No. 37 up in the rafters at TD Garden. His four career Frank J. Selke Trophies are tied with Canadiens legend Bob Gainey for most in NHL history.

Bergeron is only 37 games away from being the sixth Bruin of all-time to play in 1,000 career NHL regular season games, and he still shows great skill offensively and defensively at the age of 33. Bergeron scored 63 points in 64 games this past season while finishing as a finalist for the Selke (won by Kings forward Anze Kopitar).

There is no question that Bergeron was and still is an important player to the Boston Bruins organization, but his route to Boston is fairly unknown. Patrice was drafted the second round of the 2003 NHL Entry Draft by the Boston Bruins’ 45th overall selection. However, it was not just a normal pick for the Bruins.

According to Pro Sports Transactions, back in 2003, there was such a thing as unrestricted free agent compensation. Different players from across the league would be categorized into different groups with certain criteria to be included in that group. Going back even further, on November 15th, 2000, the Boston Bruins completed a trade that would send Bill Guerin to Boston while Anson Carter, a 2001 first-round pick (Ales Hemsky) and a 2001 second-round pick (Doug Lynch) would head to Edmonton.

Guerin would spend only two seasons in Boston, putting up 69-60-129 totals in 142 career games, as well as six points in as many playoff games for the team. However, the B’s would not re-sign Guerin when his contract expired in the 2002 offseason. Due to the UFA compensation rules and Bill Guerin being a Group III free agent, (age 31 or older with at least 4 years of NHL experience), the National Hockey League itself would have to give Boston a draft pick in the following draft.

Unlike in today’s NHL where, if an RFA signs with a new team, that new team has to hand over a draft pick to the original team, the league itself had to fork over the draft pick instead. The Bruins would be awarded the 45th overall pick, which became Patrice Bergeron. 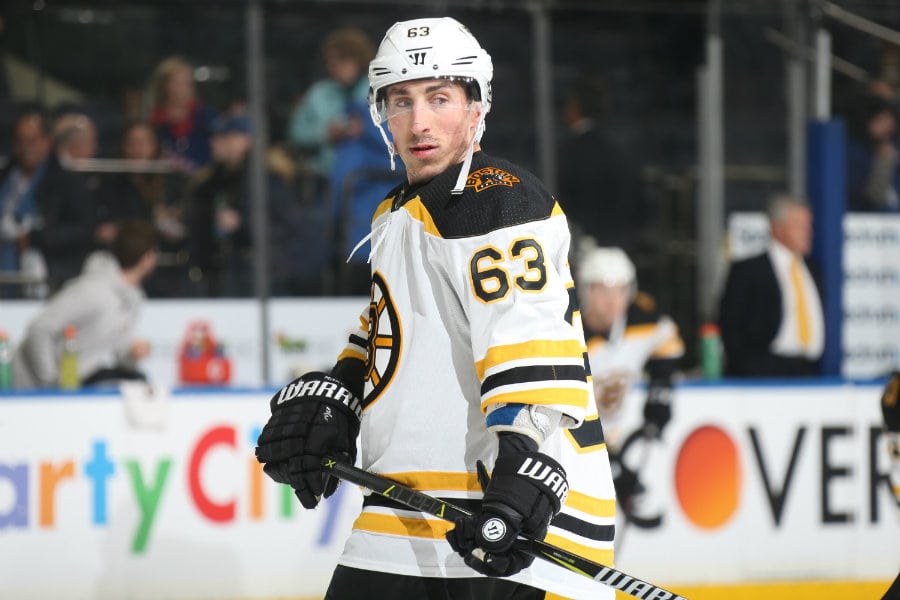 Did you know that Brad Marchand was nearly an Arizona Coyote AND a New York Islander?

The back-to-back 80+-point scorer clearly has made a name for himself in this league and not always because of his goal-scoring talent. Marchand is commonly hated throughout the league and for Bruins fans, we expect a suspension or a fine at some point during the season, especially over the past 2-3 years.

However, Marchand was pretty much forced to use the feisty style of hockey early on his career in order to become a regular member on the Bruins roster. Brad was drafted in the third round of the 2006 NHL Entry Draft following a decent season with the Moncton Wildcats of the QMJHL.

Once again according to Pro Sports Transactions, the 71st overall pick that eventually became Brad Marchand was originally owned by the Arizona (then Pheonix) Coyotes. On March 9th, 2006, the Coyotes traded the 71st overall pick to the New York Islanders for Oleg Kvasha and a conditional 2006 fifth-round pick.

Then on draft day, June 24th, 2006, the Islanders would move that third-round pick (#71) to the Bruins in exchange for the 98th overall pick (James Delory) and the 126th overall pick (Shane Sims). The Bruins clearly wanted Marchand and did not want to risk the wait.

Marchy went on to be one of the best players in the 2011 Stanley Cup run, scoring 19 points in the 25 playoff games that year.

David Krejci was one of the top players in the 2011 Cup run as well, leading the team with 23 points during the postseason. He has played all of his 769 career NHL games with the Boston Bruins and amassed 570 career points over that span.

Like the other key players already mentioned, Krejci was not just a simple draft selection by the Bruins in the 2004 NHL Draft. As per Pro Sports Transactions, the San Jose Sharks originally had the 63rd draft pick that the Bruins used to draft Krejci, but on June 26, 2004, the Bruins traded three picks (2004 3rd, 2004 4th, 2004 9th), for that pick.

Recently, Krejci has found chemistry with Jake DeBrusk on his left-wing, scoring 44 points in 64 games.

Marc Savard was one of those players that were loved greatly while in Boston. He played the final five seasons of his NHL career in Boston, playing in a Black N’ Gold sweater more than any other team in the league. From 2006-07 to 2008-09, Savard scored 62-200-262 totals in only 238 regular season games — one of the best scorers in the league at that time.

Savard’s best year came in the 2006-07 season, his first as a Bruin, where he scored 22 goals and added 74 assists for 96 points. His 74 assists were the third-most in the entire league that season. While his success was incredible during the first 3 years in Boston, the dreaded injuries started to pile up.

Seven games into the 2009-10 season, Savard blocked a shot that broke his foot during a game. He was placed on long-term injured reserve on the Oct. 21, 2009. After returning to the lineup, Savard and the Bruins agreed to a 7-year deal worth $28.05 million. Unfortunately, only 28 seconds into a January 7, 2010 game against the Chicago Blackhawks, Savard collided with Jonathon Toews, giving him a minor MCL tear in his right knee.

Following two concussions in the next 10 months, Savard was told by Bruins management to take the year off. Turns out, he would not play another NHL game again. GM at the time Peter Chiarelli and the rest of the Bruins petitioned to get Savard’s name on the Stanley Cup, even though he failed to play a single game in the ’11 Playoffs.

All that was because of the 2006 offseason, when the Boston Bruins signed Savard to a four-year, $20 million contract.

During his prime, Milan Lucic was a force to be reckoned with. At 6-foot-3 and 236 pounds, Lucic was a wrecking ball on skates and it was often hard to knock him off his feet. Just his presence alone made opposing players think twice about hitting the best player on the Bruins roster.

In only his second NHL season (2008-09), Lucic finished first on the team and sixth in the entire league for most hits landed with 256. Lucic made an impact on the Bruins roster, but he wasn’t a grinder or enforcer-type hitter. Like Cam Neely in a way, Lucic could be considered a power-forward — a physical player who can put up some decent numbers offensively as well.

In the 2010-11 and 2011-12 seasons combined, Lucic laid 368 hits as well as 65-67-123 totals. Lucic often found his home alongside David Krejci but could be a versatile winger. Milan made some big plays in the 2011 Stanley Cup run with the Bruins as well as in the Game 7 comeback against the Toronto Maple Leafs in the 2013 Eastern Conference Quarterfinals. The intimidation factor alone made Lucic a great player for the Bruins organization at the time of the best success in recent B’s history.

We know today that Lucic plays with Connor McDavid and the Edmonton Oilers, but at the beginning of his career, before he was even drafted, Lucic could have very well been an Oiler. On March 9, 2006, the Bruins traded former No. 8 overall pick Sergei Samsonov to Edmonton for Marty Reasoner, Yan Stastny, and a 2006 second-round pick that turned out to be 50th overall. The Bruins used that selection to draft the Vancouver native. 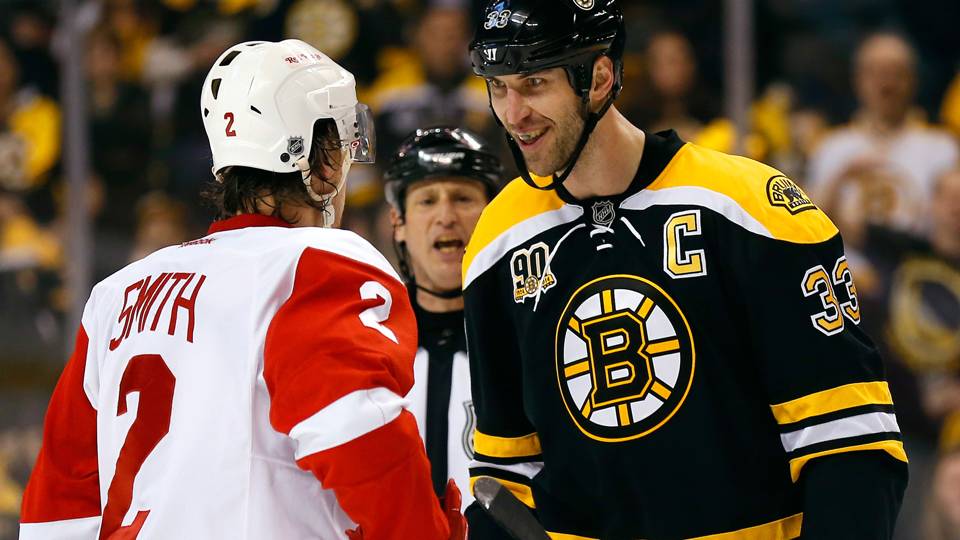 Captain Zdeno Chara is easily a future Hall-of-Famer and will have his number retired one day to be remembered with the best to wear the Spoked B. Similar to Lucic, Chara brings a physical style that is quite difficult to match — mainly due to his 7-foot tall frame on skates and the workout intensity that few players can replicate.

Chara has been a Bruin captain since joining the team back in 2006, the same year Savard came to town and the same year Lucic and Marchand were drafted. The acquisitions of both Chara and Savard proved to not only the players but most importantly the fans of Boston that the Bruins organization was not okay with losing. The season prior to the ’06 offseason, Boston finished dead-last in the Northeast division with a 29-37-16 record.

Chara came into the picture and impressed everyone. His physicality in addition to his on-ice skill made his captaincy even more deserved. Since the Bruins signed Zdeno to the five-year, $37,500,000 contract in July of 2006, Chara has accomplished the following accolades.

The Boston Bruins have had some great players in recent years and each and every one of them has had an impact on the organization. If I missed anyone or you would like to know more about a specific player, message me on Twitter @tkdmaxbjj.