Mark Your Bruins Calendar: Part I

With the Bruins upcoming 2018-2019 schedule released earlier this Summer and Summertime’s hold on the calendar ever-so-quickly turning towards Fall and the start of Rookie Camp, now seems like the perfect time to pull out a pen and circle some key dates that could be critical to the team’s success this season. And yes, I actually still do have a wall calendar that I make marks on instead of always looking at my phone, or computer or B’s/NHL app. Call me a relic, call me what you will. Say I’m old-fashioned, say I’m over the hill. But like Bob Seger and his Silver Bullet Band buddies, I enjoy a bit of old-timey-ness in my life.

While we’re on the subject of people from Detroit, it’s right after the Bruins play the Red Wings to wrap up their first brief homestand in October that my calendar has a highlighter highlight. And yes, it’s gold over black pen, rather fitting for a Black N’ Gold blogger (I didn’t even notice that until now so it must be karma, as opposed to Kramer, that I’m writing about it). Giddy up, indeed!

Sure, anyone can argue that Opening Night on the road versus the defending Stanley Cup champs, the Washington Capitals, deserves a star on the schedule. But I’m more interested in the first big road trip of the year, and it comes not long after the season starts. In fact, only five games in. AND, it’s the always challenging Canadian west coast kick. Usually, this stretch of games is reserved for the late Winter / early Spring part of the schedule but not this season. Right out of the gate, the B’s players — especially the young guns and newly acquired backup Jaroslav Halak — will be tested with a tricky trip through British Columbia and Alberta (capped off with a “how do ya do” in Ottawa, Ontario). Fellow blogger @thesportsguy97 mentioned this stretch when he previewed the whole schedule recently, but I’m highlighting it again because of its potential importance to the team.

It goes without saying what a solid showing versus Calgary, Edmonton (back-to-back, hence Halak’s importance) and Vancouver can do for the morale of the team. Oh, and the Senators, too. I’m sorry, they’re just so forgettable/regrettable/unbeatable these days. One needs to look no further than the 2010-2011 Cup-winning Bruins squad that SWEPT these teams in late February. That stretch of play galvanized the youthful B’s core along with the grizzled vets and truly catapulted them to contender status. Yes, that was towards the end of the year, but getting those same results–or at least the same level of spirited competition–at the start of the year for this upcoming B’s squad would be absolutely beneficial to everyone. It would also prove that team bonding during travel makes a big difference on the ice, as I’ve always felt personality and leadership on the road can be just as invaluable as all those “intangibles” coaches, scouts and hockey insiders like to mention (anyone following this season’s Red Sox roster knows exactly what I’m referring to). So there you have it: mark October 17th – 23rd on your Bruins calendar! 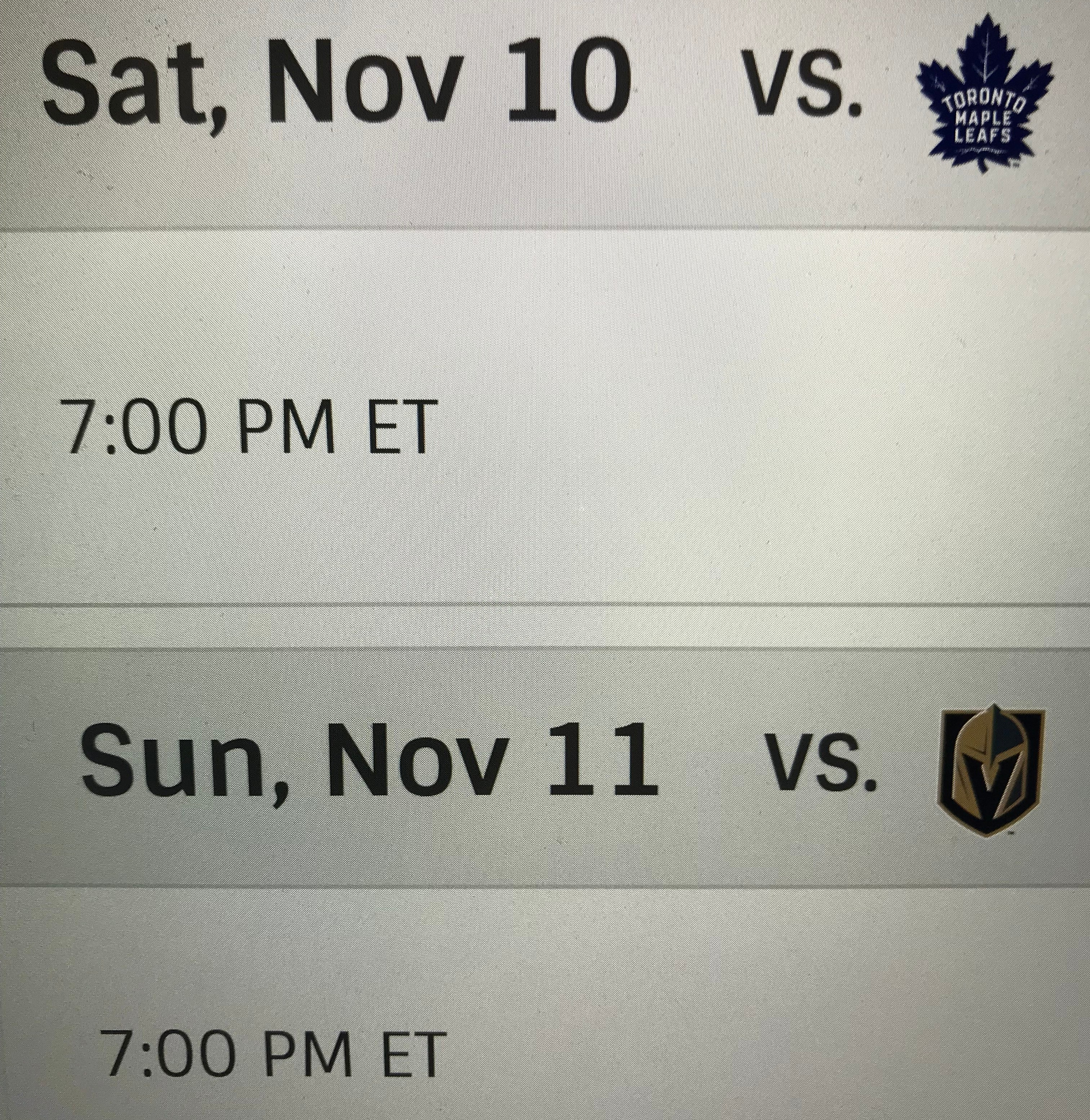 It’ll be time for the Toronto Tavares test, plus a roll of the dice against Vegas, once mid-November rolls in for the B’s. I think these back-to-back home games will speak volumes to where the team is or needs to be early in the season. In the first game, you’ve got the team everyone believes is now better than the B’s because a former man of the Isle returned home to Mapleville (I’m not quite sold on this, hence why I warned readers to be weary of “hot takes” in an earlier blog post right here), and they’re coming to Boston right about a fifth of the way into the campaign. This is when you can truly get an idea if the new players in your lineup, or even players in new roles, or even new role players, are all gelling together. And it’ll just be entertaining to watch the B’s best D-men, including new blueliner John Moore, try to contain Tavares and the skill-guys of Toronto.

Don Sweeney on Boston Bruins losing John Tavares sweepstakes: ‘I would’ve preferred it not in our division’ https://t.co/G2p7HxHGyq

Like Dealin’ Don said earlier this month, he wishes Tavares didn’t go to a team “in our division.” But what a division test it’ll be for the B’s! Just like the tough test the Golden Knights always bring. Not only did Vegas nearly steal the Stanley Cup in its inaugural season, but they stole a few points (and players) from the B’s early last year. And I expect them to be just as pesky, if not a bit more battled-tested, this season so depending on how the Bruins play and respond to the big Tavares game, this next-day affair could be a momentum builder or killer. Especially with a mini road-trip through Colorado, Dallas and Arizona immediately following (3 games in 4 nights). Either way, it’ll be a must-watch weekend of at-home hockey in Boston. So there you have it: mark November 10th and 11th on your Bruins calendar!

‘Tis the season to be jolly in December and it could be very jolly if the B’s take care of business against their main challengers for the Atlantic Division crown — Tampa & Toronto. In fact, the month starts with 5 consecutive in-division contests, with the aforementioned two games being obviously the most important. I’d call these “measuring stick” games for the B’s, especially since they’ll have gotten a taste of Toronto twice before but it’ll be there the first strike against the Bolts. It would feel good to get some revenge against Tampa after those 4 consecutive losses in the second round of the playoffs knocked the B’s out this past season. In fact, it was the only stretch of hockey all year where the B’s lost that many games in a row. Step up on the road, earn a hard-fought W, then fly back to Boston to make syrup out of the Leafs… that’s at least the plan for kicking off the holiday season for the B’s. So mark December 6th and 8th on your Bruins calendar!

**An honorary mention for a fun game on the calendar: December 20th versus the (Mighty) Ducks of Anaheim, if only to see these retro Charlie Conway-esque beauties in action perhaps:

The Anaheim Ducks are bringing back the “Mighty Ducks” themed jerseys for their 25th anniversary season.

Heck, I’d even settle for one of these:

I know the Anaheim Ducks are bringing their “Mighty” 3rd jersey’s back this year (hoping they wear ’em against the B’s this Fall), but this is still a fun sight to see at any hockey game, LOL! #GordonBombay #OffThePost #HansKnewBest pic.twitter.com/c0QPWBZdH1

No matter what jersey the opposing team is wearing, though, you can count on the spoked-B to be out in full force this upcoming season–a season where some key games off the bat could show Bruins fans and management that last year’s successful squad was no fluke and that Boston’s bright future is only getting brighter (no highlighter needed). Or, as the great Bob Seger once suggested through song, there they go playing stars again. I’m quite excited to “turn the page” to 2018-2019!