What Remains In Bergeron’s Tank For The Bruins? 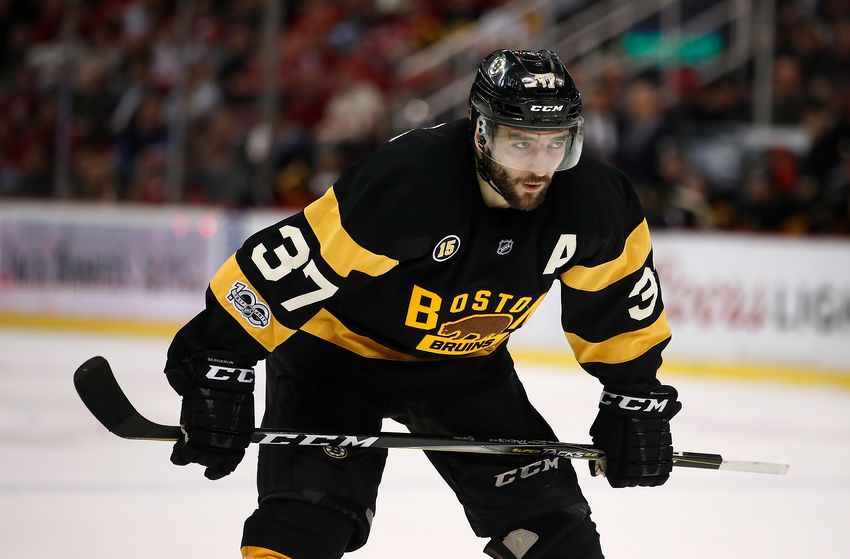 From the moment he stepped on the garden ice as an 18-year-old rookie, fans of the Bruins knew they were going to love their new young center, Patrice Bergeron. Scoring 39 points in 71 games during his rookie season, Bergeron proved that he knew how too play “Bruin’s Hockey.” The love the fans had for him continued to grow with every goal, every win, and every time he stepped onto the ice. The Stanley Cup victory in 2011 showed just how much love the city has for Bergeron and him for the city that took him in. It took until 2010 for the rest of the league to realize the special player that was in Boston, but since 2010 he has been nominated for the Selke Award eight straight seasons and has brought the hardware home in four of those.

It is now up to Bruce Cassidy and Don Sweeney to step up and protect their top center from himself. He is now 33 years of age and still has 4 years remaining on his current contract -during which they are looking to remain in playoff contention probably each of those four seasons. After being on one of the leagues top scoring lines, it is hard to imagine pulling the reigns back on playing him so much. What makes it even tougher to cut a guy like Bergeron’s minutes is the fact that he has proved, like many others in the league, that he will do anything to step out on the ice for his city unless he is dead, dying, or in a coma. Many point to guys like Zdeno Chara and Jaromir Jagr as evidence that Bergeron still has a good 8-10 years left to his career and that resigning the forward is a huge part to this teams future. Unlike his current and former teammate, Bergeron has a long history with both injuries and concussions.

Almost everyone is aware of the major concussion that Bergeron suffered early on in his career when he was just 22-years-old. Suffered at the hands of Randy Jones, and shown in the above video, first of Bergeron’s major concussions occurred on October 27th, 2007. This one hit put the rest of his career in jeopardy, and it almost never happened. If this was Bergeron’s only concussion, then slowing him down wouldn’t be as much of a priority and seasons beyond this contract wouldn’t be in question. However, Bergeron went on to suffer three more major concussions on December 20, 2008, May 6, 2011, and April 2nd, 2013. He also has a laundry list of other injuries that he has sustained over the course of his career as well.

It seems that coming out of every season, number 37 is lined up for recovering from something serious. Now that he is 33-years-old, the question remains just how much more his body can take. With this team clearly prepared to be in playoff contention for the remainder of his current contract, Bergeron will play one of the most vital roles in this organizations success in the playoffs, and they need him to be healthy. It is clear that Sweeney and Cassidy will need to be the ones to keep Bergeron from overexposing himself and making his own body shut down. With the increase we are seeing in early retirement one has to also wonder if Bergeron will give any thought to hanging up his skates when his current contract runs out. If the Bruins are looking to retain him longer and want to have him healthy for a deep playoff run, they need to start monitoring his time on ice going into this season.