Why Another Year Of Chara Is A Great Move 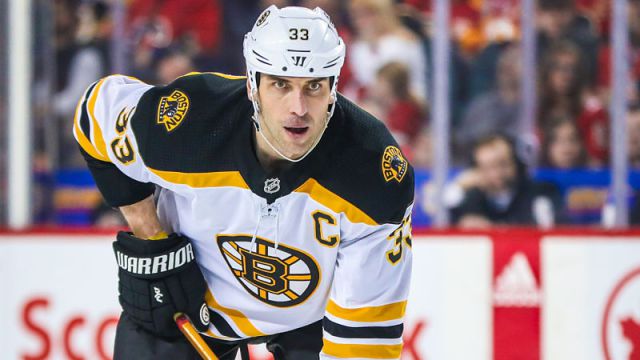 Back in March, The Boston Bruins announced that captain, Zdeno Chara, had agreed to a one-year contract extension through the 2018-19 season. At 41 years of age, the 6-foot-9, 250-pound defenseman earned himself $5 million for one last dance plus a potential $1.75 million in performance-based incentives. The fans reacted well to the news, but after the Bruins crashed out of the playoffs, some questioned if Chara was still up to the task. Here’s why I think his contract extension was a masterstroke by GM Don Sweeney.

Last season Chara showed that he can still compete at hockey’s highest level. He played in 73 regular season games with a plus/minus of +22, great numbers for a player on the wrong side of 40. He also chipped in offensively with 7 goals — 3 of which were game-winners — and 17 assists. He established a solid partnership with Charlie McAvoy, the combination of youth and experience flourished, and they looked comfortable as the Bruins’ top defensive pairing. Chara’s experience allowed McAvoy to play with more freedom, boosting his confidence. While I think his ice time will be reduced this season, there’s no doubt that McAvoy will benefit from another season alongside Chara.

The Bruins captain boasted impressive individual numbers last season, but not everything can be quantified onto a stats sheet. His leadership is priceless to the Bruins. Time and time throughout the season we saw him bring the players together and give rousing team talks, rallying the squad just when they needed it. The Bruins have a young roster when compared to most NHL teams, and it’s important for them to blend the talented youth with experience. Chara sets high standards for the team, and his contribution as captain is often overlooked. Strong leadership is a key ingredient to any cup-winning team, there are few better role models for them than Zdeno Chara.

We’ve all been bored this offseason, but be careful what you wish for because next year will be a roller-coaster in comparison. Ryan Donato, Danton Heinen, Noel Acciari, Charlie McAvoy, and Brandon Carlo are all coming to the end of their current entry-level contracts at the end of next season. I would be surprised if Sweeney doesn’t want to keep all of them on the roster, but with salary cap restrictions, it will be challenging to hold on to everyone.

This is where the Chara’s contract extension really comes into its own. First, this allows younger players — particularly McAvoy — another season under his wing, which is excellent for his continued development. Second, at the end of next season, both Chara and fellow defenseman Adam McQuaid are set to become unrestricted free agents. Assuming that neither player is re-signed, the Bruins will free up $7.75 million worth of cap space. We’d all like to see the young talent tied down for as long as possible, especially if they have strong campaigns again next year. The extra cap space gives Sweeney more flexibility when he enters negotiations, and he also has the option of exploring the free agency market, which will be much stronger next year then it was this time around.

Zdeno Chara is a beast at 41 yrs 🤯💪🏻 pic.twitter.com/tDW3wtYlSb

While he can’t go on forever, I’m not ready to say goodbye to Chara, and I’m glad the Bruins aren’t either. Sweeney is putting together a talented roster and having his captain around for another campaign will help the team on many levels. I think the cup window will remain open for a few more years. Next season will be tough as the Atlantic Division is only getting stronger, but the future looks bright for this young team, thanks in part to our captain, Zdeno Chara.

.@CMcAvoy44 answered your questions, talked about visiting the @Patriots training camp and raved about his D partner Zdeno Chara on our #NHLNFanShow. @NHLBruins pic.twitter.com/2Ku7eVaphe