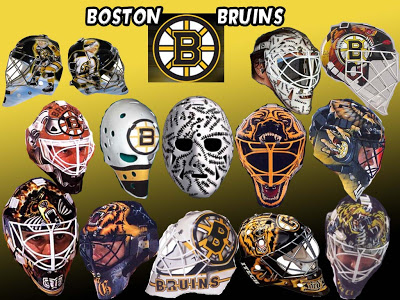 We don’t need no education … about the history of goalie masks in Boston. That’s because the Bruins franchise basically made wearing them into an art form over the years, truly showing how form and function can go hand-in-hand (better yet, glove-and-blocker?) with captivating cages meant not only to protect, but also promote, the face of hockey.

We were treated to such a promotion recently when the NHL revealed the new head gear of Bruins No. 2 netminder Jaroslav Halak. And just like the Pink Floyd quote which opened this article, there may have been some “thought control” behind Jaro’s design! In fact, our friends at NESN are already calling it the “coolest mask in the NHL” (but they kind of have to, right?).

A standout goalie is often referred to as a “brick wall.”

Jaroslav Halak took that very literally in the design of his new @NHLBruins mask, created by @daveartofficial. pic.twitter.com/rdsepw2seY

Dark sarcasm in the classroom aside, I’m hoping The Boston brick wall will become as iconic as many of its illustrious predecessors. Speaking/typing of which, here’s an informal ranking of the Top 5 Bruins Goalie Masks of all time — IMHHO (In My Humble Hockey Opinion if you’re just joining the Black N’ Gold blog). But first, let’s clank a few honorable mentions off the post for good puck luck!

Jim Carey aka “The Net Detective” aka “Ace” aka “The Mask” 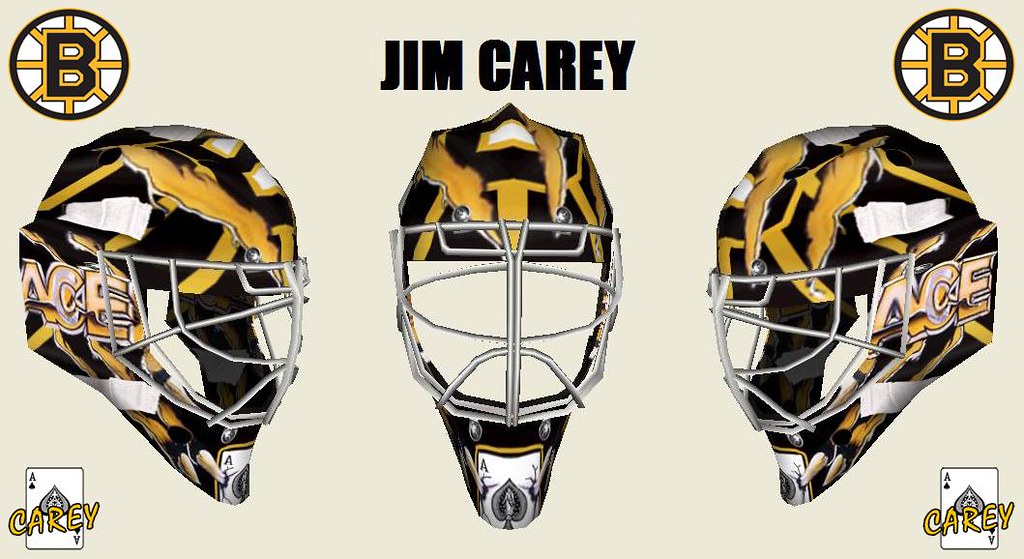 How do you not give a shout out to a mask worn by a goalie with the nickname “The Mask” because his actual name was the same as the famous actor who played The Mask! Art imitating life imitating art at its frozen finest. (Photo Credit: Flickr)

Any goalie who’s been “knighted” deserves an honorable mention. Dafoe literally had royalty labeled front and center on his mighty mask. All hail Lord Byron … except in the playoffs when his five-hole was exposed as much as his alter ego’s lyrical lust for romanticism. (Photo Credit: I Love Goalies)

Jeff Hackett aka Jeff “Can He” Hackett

Well, in terms of his hockey helmet, YES he can! Any kid who’s ever played hockey before has either dreamed of playing “on the pond” or actually done it with the neighborhood crew out in someone’s perfectly frozen backyard. This picturesquely purist take on growing up with a love for the game deserves a little love right here. (Photo Credit: Goalies Archive)

Pardon my French (Canadian), but is this guy wearing a bleeping duck-billed mask? Yes, yes he is and it couldn’t be uglier in the best way possible. From the big bespoked “B” on the forehead to the crisscross applesauce Black N’ Gold bottom, Rogie V’s inverted “V” probably inspired the Mighty Ducks cartoon-style logo a decade+ later. You “might” want to “duck” for cover after seeing it. Lord (Byron) knows I can’t unsee it now LOL! (Photo Credits: Vintage Sports Items)

If you love hockey and you love comic books, particularly The Amazing Spider-Man series from the early 80’s, then what happened in net in the mid 90’s for two Bruins goalies should intrigue you. Now this is pure speculation on my part, but take a look at the masks of journeymen keepers Rob Tallas and Scott Bailey, who split time between the pipes in Boston from ’95-’97. Take a long, hard look at the uniquely placed “webbing” and “B” logo on the mask of Tallas — doesn’t that seem to bear a striking resemblance to Spidey’s iconic logo? And then there’s Bailey’s all-black mask with two glowing eyes on top and multiple rows of jagged teeth below. Does the name Venom ring a bell? Call me crazy, but I think these two were in cahoots with one another and pulled off the greatest character crease coup of all time! That’s right, Spiderman battled Venom for who would start in net for the Bruins. Peter Parker and Eddie Brock — we now know their true hockey aliases. This is something to Marvel at, indeed!

He’s no Jason Voorhees, but teams facing long-time B’s goaltender Gilles Gilbert certainly felt like it was Friday The 13th, as the talented netminder would often leave them on the unlucky end of a game (especially during the ’75-’76 season when he had 17 consecutive wins — an NHL record still unbroken to this day). His starring role between-the-pipes alongside the great Gerry Cheevers, whom I’ll be getting to in just a few moments, was complemented by his star-studded white mask, which continued to add more stars as his tenure with the B’s went on. 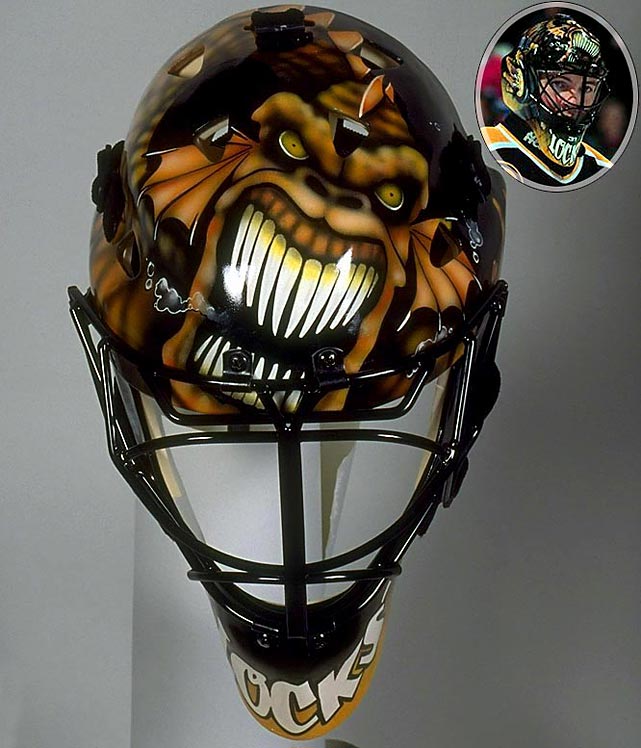 Unlike the timeless legend of “Nellie” the Loch Ness Monster, the Lach Net Monster aka Blaine Lacher’s time in Boston was a bit short-lived (’94 to ’96). Thankfully for us fans, his mask was not short on style or substance with a menacing half-bear, half-sea creature visage that you could argue inspired the most recent “Cujo-rage babies” mask of Tuukka Rask as ESPN’s Greg Wyshynski comically noted. If only Lacher’s career between the pipes could’ve been as memorable (had he won the game below–it might’ve been)! 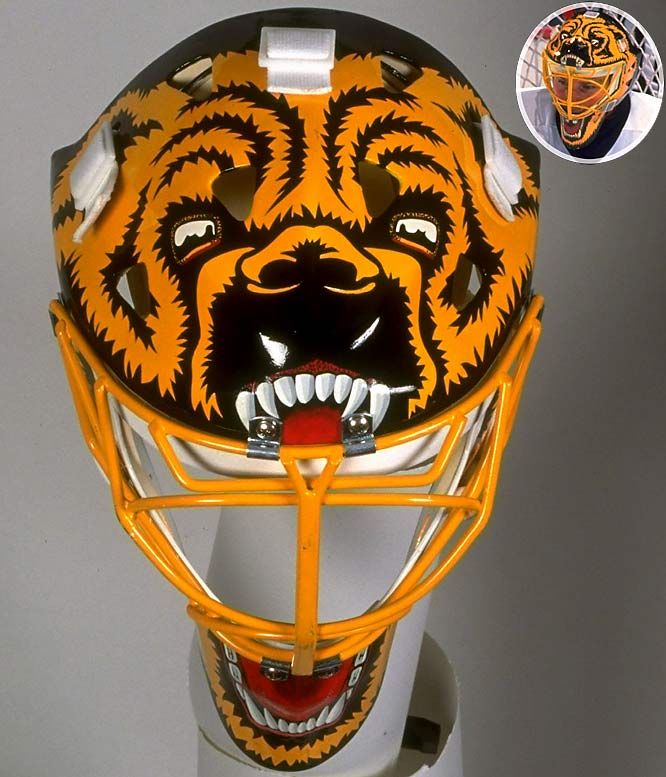 Andy had a dandy, didn’t he? The Mooger’s original mask was the perfect tribute to not only the B’s updated logo/patch of the era (which I may have thrown under the bus in an earlier post), but also to the Big, Bad Bruins mantra that had taken over the city and franchise a decade earlier. It even made Hockey Fanatics’ top ten list of “All-Time Goalie Masks” just a few seasons ago, and quite obviously inspired many of Moog’s successors to wear masks with similar artistic growls. Sometimes simple is the way to go for mask design, as long as it’s not boring John Blue or plain Pete Peeters simple. If done like the one above, it can be effective, historical & memorable — all words that accurately apply to Moog’s successful career for the B’s! 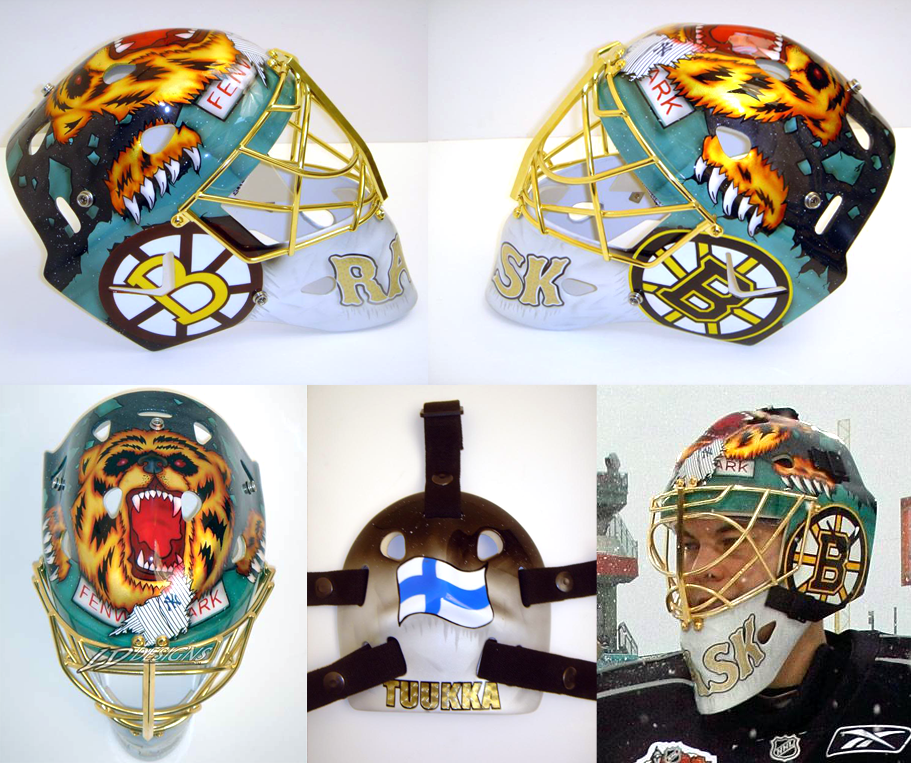 I understand wholeheartedly that B’s nation is already split down the middle when it comes to Tuukka Rask (and how good he is) and Tim Thomas (and how good he was), so this may be like adding fuel to the fire since I’m only ranking their “tribute” masks as opposed to their regular season styles and playoff picks that truly were fun to discuss over the years.  (Photo Credit: SB Nation)

But, man oh man, are these featured few like the Monet’s of maskdom. The Van Gogh’s of goalkeeping. The Nast’s of netminding. At least for Boston sports fans. Artistic hyperbole aside, during the 2010 Winter Classic, both Rask & Thomas wore masks with homages to the friendly confines of Fenway Park where the game was played, as well as to the late, great B’s broadcaster Fred Cusick who had passed away that Fall.

The B’s, of course, would win that historic game in OT, with Thomas leading the way the entire time. That meant Rask’s absolute beauty of a mask never saw “official action” even though it depicted the iconic Bruins bear officially taking a bite out of Yankees fans everywhere. Just for that it deserves its own place in hockey history and lore!

Speaking of lore, the Patriots had certainly created enough of their own in Foxboro when the B’s played their next Winter Classic contest at Gillette Stadium in 2016. While the game didn’t feel like a home ice affair with the Canadiens blowing out the B’s, Rask certainly gave a hometown (and home team) tip o’ the cap — whoops, I mean mask — thanks to his perfectly Patriotic portrayal of New England’s Brady-led best. 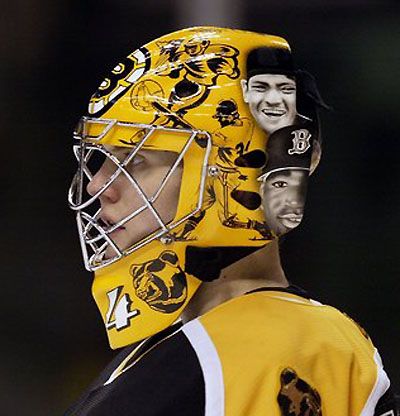 And while we’re on the subject of football, the extra point goes to whomever can guess the gent behind this finely featured mask which not only featured a Pats QB on it, but also Red Sox legends Carlton Fisk & David “Big Papi” Ortiz!

Hint: don’t “Toi” around too much or else you’ll be needing a “Nu” guess! The man. The myth. The MASK! Widely considered to wear the best mask in the history of hockey — or at least the most memorable for you Jacques Plante historians out there — Gerry Cheevers truly achieved (or as I like to write aCHEEVEd) cult status with his stitched-up face guard. And you gotta love HOW it came about:

“Cheevers disliked an all-white mask and was always looking for ways to cut practices short. During a practice in the late 1960s, a puck hit him in the mask, so he went to the locker room. Coach Harry Sinden went to check on his goalie, discovered he was fine and told Cheevers to get back on the ice. Before Cheevers returned, however, Bruins team trainer John “Frosty” Forristall painted 10 stitches where Cheevers would have been cut if he hadn’t been wearing the mask. The theme stuck, and every time Cheevers took a puck to the mask, Forristall added another stitch mark on it.” — ESPN’s Joe McDonald

I mean, I’m in stitches after reading this! What a way for legend status to start, am I right? Countless duplicates, alternate versions and copies would be worn by fellow goaltenders of his time — and in the future — but nothing can replace or replicate the OG that was GC. And since imitation is the best form of flattery, not to be confused with philately which also gets my stamp of approval for great goalie gear appreciation, here’s how the legend of Cheevers’ lace-filled looks lives on in Bruins history:

One-time Bruins goalie Steve Shields gets top marks for “Best Cheevers’ Mask Salute” for his literal modernization of the famously infamous face (he even wore it while playing for the Panthers — it was that cool) that covered all of his helmet. It even featured Cheevers’ notoriously wispy locks and protruding ears! Next you have the Rask Mask 2011 edition, which highlighted the throwback Cheevers throwing himself after a save on the left side (he also paid tribute in 2012 with a small stitched-up mask near the back). Backup Chad Johnson backed up his love for Cheevers’ on-ice tending with a slick “Cheevers 30” font that fittingly fit on his mask’s back right flap. And flying under the radar are two quite brilliant goalie masks with beautifully detailed Cheevers’ artwork that belonged to former Baby B’s keeper Mike Hutchinson and current prospect Kevin Resop. Whether you remember any of these or noticed any of these, one thing’s for sure: there’s no masking No. 30’s impact & legacy on the Bruins franchise AND all of hockey!

Well, don’t fret! Some Tim Cheveldae soon, there’ll be Kay Whitmore to discuss when it comes to this rather Jim Pettie topic as long as you’re not Frank Brimsek of it. And I promise no one will be Pat Riggin the results. Until then, let’s have a Halak of a season!