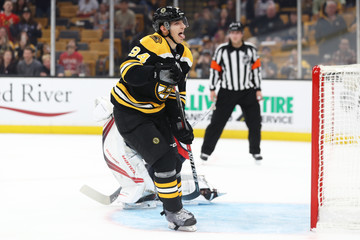 The Boston Bruins announced today that the team has signed forward prospect Jakub Lauko to a three-year entry-level contract. The 18-year-old versatile forward really made a name for himself over the summer in development camp and showed increased confidence during the fourth annual Prospects Challenge in Buffalo, New York. He has impressive speed, and a skilled pair of hands for a developing player and most likely key attributes to him staying with the big club during these final days of training camp.

The 6-foot, 179-pound Czech Republic native was assigned to the Quebec Major Junior hockey Leagues Rouyn-Noranda Huskies shortly after being signed. Lauko was initially drafted by Rouyn-Noranda in the Canadian Hockey Leagues import draft where he was selected with the 107th pick of the second round in 2017. Although the Huskies held his rights, Jakub returned home to his Czech Republic Pirati Chomutov club in the Extraliga League to continue his development until his 2018 draft year where the Boston team saw something special in the young prodigy.

Super Excited to sign my ELC with @NHLBruins🐻 Can’t wait to join @HuskiesRn in this season🐺 pic.twitter.com/G9IdZnLXPd

Lauko only played in the first two preseason games with the Bruins team that was assembled for the domestic schedule but was phased out of the lineup when the team members that were playing over in China returned home. In those two games, he did see action in, he showcased his speed in each respected game to get on the scoresheet with breakaway goals.

The Draft Analyst Steve Kournianos had this scouting report on him below in an article he wrote in January of 2018 that can be seen in its entirety HERE.

“One of the 2018 draft’s fastest skaters was relegated to a support role and did not dress in the Czechs’ lone loss to Sweden. In his limited minutes, however, the excitable forward busted it from whistle to whistle and used his speed to create a significant amount of separation  Lauko is a useful player who backchecks and will throw his weight around, and the constraint of playing under 11 minutes a game has not limited his ability to make the most out of every shift.” – Steve Kournianos – The Draft Analyst

As a European drafted skater, Lauko is eligible to play for the Providence Bruins in the American Hockey League, but coming from bigger international ice in his home country to play in smaller North American ice, his placement will be very important for his future development. A solid upcoming season in the QMJHL will better prepare him for the AHL in a year. And who knows? If he explodes offensively and shows the Bruins brass he has what it takes he could very well see his way to the B’s lineup very soon. This Bruins team has a plethora of developmental talent in the system, so I’d be wary of rushing his progression and stand firm with patience and bringing a kid like him up too soon.