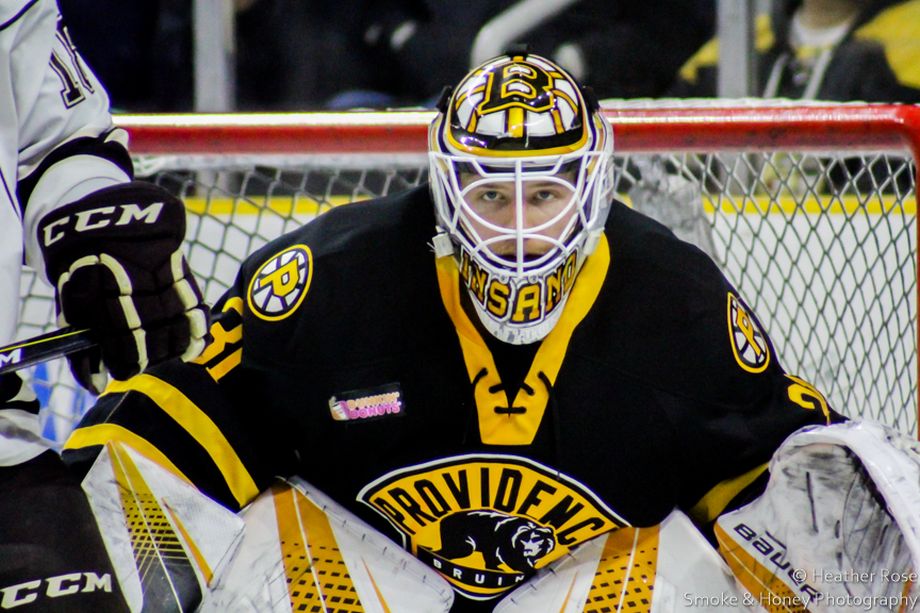 As the Boston Bruins roster gets set to finalize its player roster to the league-mandated maximum of 23, some players like goaltender Zane McIntyre had to go through the grueling waiver process before being sent down to the American Hockey League yesterday. After the 24-hour time period on the waiver wire, the 26-year-old netminder who’s been Bruins property since he was drafted in 2010 has cleared waivers and will report to the Providence Bruins for the upcoming 2018-19 campaign, which kicks off on Friday in Hartford, Connecticut against the host WolfPack.

Zane is not waiver exempt and may be picked up anytime before 12pm tomorrow. #nhlbruins #BruinsFam

So, now that Providence Bruins training camp is already underway with their first preseason game tonight at the Dunkin” Donuts Center in Providence, the team’s goaltending tandem for the season is pretty much set in stone, but what’s next for McIntyre and his future with the Bruins organization? The North Dakota native has one more year left on his current 2-year two-way contract that he signed in July of 2017, but it remains to be seen what both sides will do when he once again becomes a restricted free agent in the summer of 2019.

Zane is a hard-working netminder and fan favorite who will no doubt take his placement back in the AHL with pride and continue to work on the attributes that got him to the pro level in the first place. He will once again gain valuable knowledge from goaltending coaches and former NHLers Bob Essensa as well as Mike Dunham, who was hired last summer as a developmental coach making his rounds around to the Bruins prospect goaltenders worldwide. Below are a few scenarios that could happen in McIntyre’s immediate future.

Stays With The Bruins Organization

Although McIntyre will be in Providence for the upcoming season continuing to craft his skills, he will be a valuable asset when it comes to leadership with his goaltending partner, Dan Vladar, who recently spent the past two seasons with the Bruins Premier “AA” minor-pro affiliate — the Atlanta Gladiators of the ECHL. This will be Vladar’s first full season of AHL action and will split the 76 game schedule with McIntyre, which could very well be the AHL’s best netminding tandem in the league. McIntyre, an AHL veteran of 109 games with a 61-29-10 record, a career GAA of 2.41, and a .914 save percentage, will provide great tutelage to the 21-year-old Vladar, who’s only been involved at the AHL level in 12 games posting a 6-2-1 record, a GAA of  2.42, and a .922 save percentage.

Vladar is more than ready for this promotion and has impressed the Bruins brass in recent years either in his tenure with Atlanta, his short time in Providence covering for injuries at higher levels, or his outstanding work ethic in previous Bruins camp events such as the annual development camps, rookie camps, and NHL training camps. Now that McIntyre has cleared waivers, I’m really looking forward to what these two goaltenders can do as the Providence organization is in prime shape to challenge for a Calder Cup this year.

I know what I’m about to say isn’t going to sit well with the fans of Zane and what he’s brought to the Providence club and surrounding community, but a trade out of the Bruins organization wouldn’t be a bad idea at least for him. The ultimate goal for every hockey player either at the AHL level or below is to be a permanent fixture in the NHL so I believe after nine years in the B’s depth he’ll have a better opportunity with another NHL franchise. This would certainly put the Providence club at a disadvantage with having to find another netminder to fill his shoes, but it can be facilitated by looking for talent around the world to come in as a free agent and could give Vladar even more time in the crease to get better with a hefty load of games favored his way.

In return, if the Bruins were to trade a player of McIntyre’s caliber to another team that can make his dream of NHL sustainability, the B’s could very well get something in return by way of a draft pick or developing player that the B’s scouting staff may be keeping an eye on. Zane still has what it takes to be a fantastic middle depth goaltender for an NHL franchise around the league, but it’s going to be up to him to reach the next level and how bad he wants it.

Zane McIntyre cleared waivers, looking to have a bounce back season as the de facto starter in Providence, although Vladar has impressed many.

Both Sides Agree To Part Ways After The 2018-19 Season

McIntyre is set to be a restricted free agent next summer as I’ve mentioned above but with a few prospect goaltenders seemingly passing him in the depth chart, it might be an opportunity to seek work elsewhere. With names like Vladar, Kyle Keyser (OHL Oshawa Generals) who will be eligible for AHL action next season, and Jeremy Swayman (NCAA) who’s entering his sophomore season at the University of Maine, Zane might look at that and not want to return to the Bruins organization. This will not be the first time a prospect has seen what’s ahead of him and decide to leave. A few seasons ago, former Bruins defensive prospect Matt Benning did the same thing when he looked at the competition ahead of him and requested to leave for greener pastures.

This is always a tough route for Bruins fans because a player will just pack up and leave without getting anything in return. With nine good years under the Bruins prospect umbrella, you know McIntyre’s fan favorites will go off the deep end if he walks with nothing coming back. Everything mentioned above is totally on the player and where he wants to be as an individual, but when it comes to both sides of the coin, it’s a business and a strong reason why most should not get too attached with the vast turnaround of talent at the developing depths of any NHL organization.