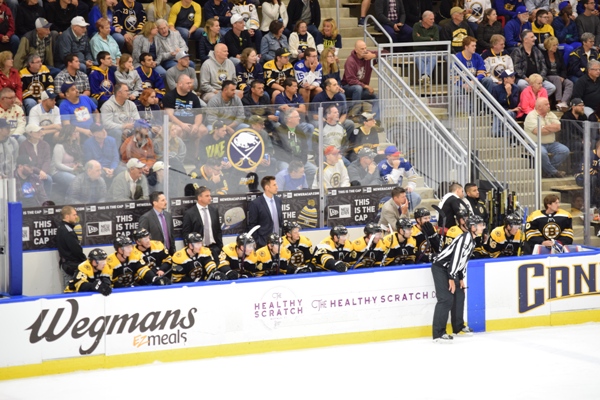 The Prospect Challenge in Buffalo, New York kicked off on Friday Sept. 7 and ran through Monday, Sept. 10. The challenge featured a round robin-style tournament between the Buffalo Sabres, the Pittsburgh Penguins, the New Jersey Devils, and our own Boston Bruins.  Boston, Buffalo, and New Jersey each won 2 of their 3 games and Pittsburgh waddled home without a single win on the weekend. Final standings, as seen below, ended up being determined by the goals for and goals against.

Over the next couple of weeks, I will be putting out a series of articles on my experiences and takeaways from this incredible experience. So, sit back relax and enjoy the first of these here and now.

When it comes to prospect tournaments, the play is often rough and tumble, a little chaotic and very, very fun to watch.  You bring together a team composed of young men who may have had a few pro games under their belt (if they were lucky) may or may not have played together before, and some who have barely even skated North American ice until now.  Next, you put them in a game situation where they are required to rely not only on their own skill and understanding of the game but trust in the teammates they have just met and possibly even learn a new style of play, which may completely differ from what they have trained their whole lives.

This is a recipe for a scrappy, emotion-filled, challenge ridden matchup and if you are looking for structured NHL formula style hockey, you are out of luck.  A chaotic environment results in one of two outcomes — you adapt, learn, and rise to the challenge, or you continue to do what you always have done and go back whence you came. Providence Bruins head coach Jay Leach said, “It’s about when they are ready…we will push them, but we won’t push them into something they aren’t ready for.” 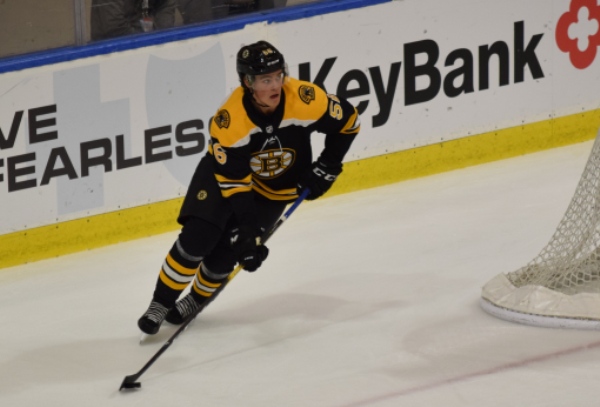 In hockey, going back from where you came is not always a bad thing. Sometimes it is not because you aren’t adapting, sometimes it is for your own good, and sometimes it is because you just need more time. A prime example of this is one of the breakout stars of this challenge, Axel Andersson. He wasn’t perfect, but this kid is like an angel on skates, his puck handling is on point, and his touch is incredible. He is one of the boys I mentioned with little to no North American ice time and the style of defense played abroad is different so he had to learn on the fly. After seeing him skate the first night against the Penguins, paired up with Wiley Sherman on the third-line D, I was convinced. He has smarts and this pairing is sweet!

I asked each of them how they felt being paired with the other. Axel explained, “I liked having Sherman there, he was confident, and made me feel comfortable.”  The respect was mutual as Wiley said, “I have always been paired with skill players, he is a skills player,” placing a hard emphasis on skills, “I really enjoyed playing with him.”

Admiration for these skills does not end with his teammates. Leach had this to say after the first night’s matchup against the Pens.

“Andy (Axel Andersson)… he is smooth, isn’t he?” Leach said. “I’ve only been able to see him play one game and (in) development camp, I have been thoroughly impressed with his game.”

Have to be honest… i think the best defensive line we have out here tonight is sherman/ andersson. They seem to have real chemistry. #ProspectChallenge #NHLBruins

Over the next three days, Jay and I spoke each day about ‘Andy’ and each day he had good things to say about how the player was learning from the video and taking the constructive criticism. On the final day, he confirmed what we had discussed on Day 2.

“The program over there (Sweden) is very good at developing defensemen in particular.  It would be good for him to play one more year there, where he is comfortable, and then I am sure he will be fine to be here.” In a surprise twist of fate I was able to meet Axel’s father and he was of the same mind as Coach Leach, but for a more parental reason, “Axel has only one year left of school and he wants to finish that first (before coming to the states),” he said. “As a father, that makes me happy.  He will continue his play at home.” 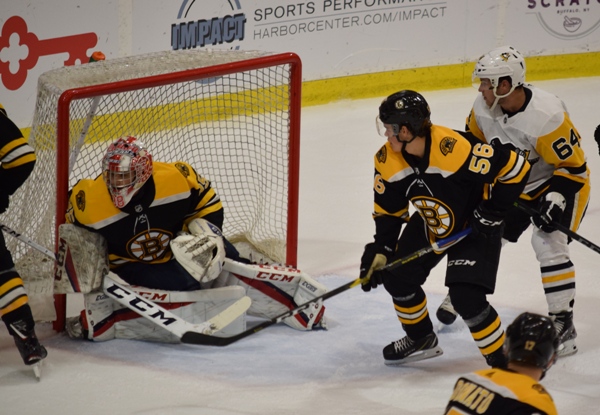 Sweden has done a stellar job thus far, let them have at it, so long as Andy comes back to grace us with his angelic moves again next year. For now, he will be close to home, close to family, be able to finish his schooling and come back in the fall ready to get movin’ and Bruin.

A huge THANK YOU to @ToCauseway for the amazing photography you supplied for my articles for this series.  Your assistance was invaluable and your guidance even more so.  In addition, a giant THANK YOU to @wifeofsalmon for making me feel so welcome and helping me settle in on my first assignment.  You were both great and I owe you one.  Hope to work with you both again soon!

Look for the second article in the series coming soon.