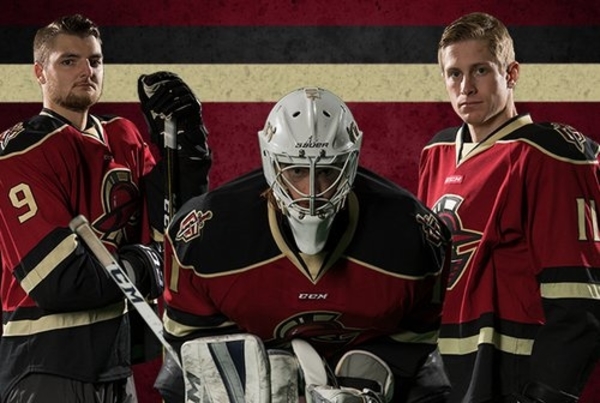 The 2018-19 ECHL regular season is finally underway, and the Atlanta Gladiators start their campaign on the road tonight, Saturday, October 13th. The Glads will face off against the Orlando Solar Bears in what should be an exciting game. There are many new faces on the Atlanta roster as well as some old ones. I’m interested to see how the team gels after training camp headed by coach Jeff Pyle.

The Gladiators announced their captains for the season yesterday, forward Derek Nesbitt, defensemen Kevin Montgomery and Ben Danford will all have an A stitched onto their jersey for the upcoming season. Interestingly, coach Pyle has decided that the team will not have a main captain this year. Following the announcement, Pyle said, “We are a team, one player shouldn’t have to answer for the whole group. That’s my job, and I’ll be the one taking sole responsibility for any blame that is needed”. This approach suggests that Pyle is not shying away from any responsibility and is looking to reduce the pressure on the players, hopefully allowing them to play their natural game. The head coach isn’t afraid to experiment adding, “We have a lot of leaders on this team, and I feel it’s important to reward guys for playing and acting the right way by having multiple players wear a letter at different points in the year.”

The Gladiators’ roster for the opening game in Orlando was confirmed earlier in the week via the team’s official website:

* indicates the player is on an AHL or NHL contract.

Before the puck drops at 7:00pm ET, here are this week’s players to watch:

Darby Llewellyn: The 22-year-old winger enters his second season with the Gladiators after impressing in his rookie campaign. Last year he racked up 30 points, including some stunning goals, making him Atlanta’s top scoring rookie with 17. Following his breakout season, he had a tryout with the Milwaukee Admirals of the AHL. This is a great platform for the young forward, you can expect the sophomore to thrive under coach Pyle this year.

Ben Danford: The teams top scoring defenseman last season with 34 points from just 52 games, earning him an AHL tryout with the Chicago Wolves in the summer. Recognition from the higher league is sure to give him a boost in confidence, he loves to get forward and will surely be a threat on the power play. While his numbers will be hard to replicate, I’m confident that Danford will continue to put up points for the Gladiators.

Olivier Galipeau: The 21-year-old defenseman joins the Gladiators on loan from the Providence Bruins. The first year pro will be eager to impress the Bruins top brass, who will be keeping track of his performances in the ECHL. Last year he was the QMJHL defenseman of the year following a monster season as the leagues top scoring blueliner with 25 goals and 74 points. You can expect big things from the youngster this campaign.