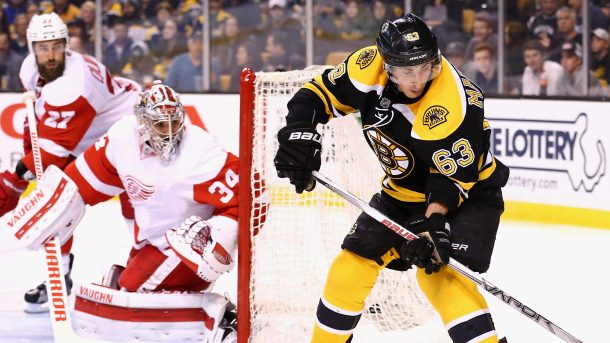 The Boston Bruins look to close out the last of their three-game home stretch with a win over the Detroit Red Wings here on Saturday afternoon. The Bruins have gone undefeated on the homestand so far, beating the Ottawa Senators 6-3 and the Edmonton Oilers by a score of 4-1 on Thursday night.

The Detroit Red Wings are still on the lookout for their first win of the 2018-19 season. Following losses to the Columbus Blue Jackets, Los Angeles Kings, Anaheim Ducks, and Toronto Maple Leafs, the team is really striving to beat the Bruins today.

Ryan Donato makes his return to the lineup after he was scratched during Thursday’s win over the Oilers in Boston. Joakim Nordstrom will remain on the Bruins second line, alongside David Krejci and Jake DeBrusk. Nordstrom scored his first as a Bruin against Edmonton.

For a full preview of the game today, check out BNG teammate, Drew Johnson’s preview.

#NHLBruins vs. Red Wings at 3pm – here's your very own pre-game skate: https://t.co/CyJNMw56iy

Before we dig into the game analysis, it should be mentioned that I was unable to tune into today’s game until the final five minutes of the first period. While I did happen to see some good play for the Bruins, I had to go to good old Twitter to see how the opening frame went for both clubs.

From my exploration to the Twitter-verse, I came to the discovery that the first twenty minutes of this hockey game was nothing to write home about. According to BNG’s Mark Allred, (@BlackAndGold277 on Twitter), the period was quite lackluster on both sides. The Bruins were outshot 12-8 and were supposedly being outplayed by the Red Wings.

The Bruins got outplayed in the first, but lead 1-0 after another goal by Pastrnak. Look to build on that in period 2 #NHLBruins

As you can assume by the tweet added above, the Bruins did manage to score one goal on Red Wings goaltender Jonathan Bernier. Bruins forward David Pastrnak scored another highlight-reel goal, going end-to-end to put the Bruins ahead 1-0 with less than one minute remaining in the period.

#NHLBruins Pastrnak – one goal away from 100. https://t.co/DsnLskAEts

Brandon Carlo and Chris Wagner were credited with the assists on the goal, even though it was mainly a one-man show by Pastrnak.

Not long after Pastrnak’s tally, the Bruins and Red Wings would engage in some pushing and shoving near center-ice due to a collision between Noel Acciari and Dylan Larkin. Bruins captain Zdeno Chara also shoved Detroit’s Joe Hicketts with one a single hand.

“A” for effort by #LGRW but personally, I wouldn’t poke #NHLBruins Zdeno Chara 🤷‍♂️ pic.twitter.com/MVNFaFc8ju

Acciari was handed a roughing minor and Larkin was handed two roughing minors, one of which served by Michael Rassmussen. Detroit would enter the second period short a player due to the penalties.

Even though the Bruins could not capitalize on the carry-over Detroit power-play, they seemed to continue the momentum from the ending minutes of the opening period. John Moore showed some solid skating and puck-handling behind Tuukka Rask’s net and he added in a solid slapshot on Bernier in the offensive zone.

The seemingly constant pressure by Boston led to their second goal of the hockey game, as Charlie McAvoy would score immediately off of a Patrice Bergeron faceoff win and the Bruins have a 2-0 lead with 15:16 remaining in the middle frame.

One of the best chances for Detroit in the second period came just after the eleven-minute mark. Tyler Bertuzzi made a solid feed to Andreas Athanasiou, who found a decent chance to score on Rask’s blocker side. However, Tuukka would stand his ground, stop the shot, and cover the rebound.

Later on in the frame, Jake DeBrusk showed some terrific forecheck, stripping one of the Detroit skaters of the puck before losing it. The Bruins quickly recovered in the neutral zone allowing David Krejci to feed DeBrusk, who was still behind the Detroit defenders. DeBrusk drove hard to Bernier’s cage, followed up with some dangles, before squeaking the goal past. DeBrusk’s first of the new season assisted solely by Krejci.

A Red Wings turnover and Jake DeBrusk scores to make it 3!

Boston’s new third forward line of Donato-Backes-Bjork has had some good rushes and battles along the boards with some decent scoring opportunities that seemed to follow shortly after. Backes centering two young players is working well for them in nearly every facet other than scoring points.

With four minutes left in the period, McAvoy took a high-stick to the face, causing an ensuing power-play for the Bruins. And, as most-likely predicted by many, the Bruins scored. David Pastrnak buried his second of the game, the 100th goal of his NHL career. An incredible milestone. Assists go to Bergeron and Marchand.

With the goal, Pastrnak became the third-fastest player born in the Czech Republic to score 100 NHL goals, trailing only Jaromir Jagr and Petr Klima. Pastrnak also scored 100 goals in the third-least amount of games among other Boston Bruins players in franchise history.

He required the third-fewest games to record 100 career goals (all w/ BOS) among players to make their NHL debut with @NHLBruins, trailing only Barry Pederson (187 GP) and Dit Clapper (247 GP). #NHLStats #DETvsBOS

As the time continued to tick away, DeBrusk takes a tripping penalty, sending Detroit on the man-advantage. Then, Brad Marchand would flip the puck out over the glass with over a minute remaining on the penalty kill, giving the Red Wings a 5-on-3 power-play. The second-period would conclude and Boston will have to start the third shorthanded by two men for eighteen seconds.

The first penalty was successfully killed off by Boston, but Detroit would score on the other power-play, scoring only twenty-one seconds into the third period and the Bruins’ lead is cut down to only three goals. Filip Hronek was credited with the goal assisted by Bertuzzi and Nyquist.

The three-goal lead was not held for long, only 1:44 to be exact, as Brad Marchand and David Pastrnak entered the zone on a two-on-one. Pastrnak to Marchand, right back to Pastrnak for his third goal of the game and it is 5-1 Boston. Pastrnak’s second-career regular season hat-trick, third hat-trick when including the playoffs.

On a Bruins power-play, Dylan Larkin would score a short-side goal past Tuukka Rask with about one second left on the man-advantage for Boston, counting as a shorthanded goal. Larkin used John Moore as a screen, 5-2 Boston.

Not wasting any time again, the Bruins third-line finally found themselves on the scoresheet as Anders Bjork sniped a shot off of the rush, making it 6-2 Bruins. Both Backes and Bjork showed great pressure on the backcheck, allowing Bjork to enter the zone on a 2-on-1, settling to shoot the puck and it paid off for him. His first of the season.

Six minutes to go in the third period, Bruins up 6-2 and the Bruins are showing some physicality. Charlie McAvoy and Anthony Mantha engaged in some board battles that led to McAvoy shoving Mantha. Kevan Miller came in to help McAvoy, but Mantha wanted nothing to do with the 6-foot-2, 210-pound Miller, insisting on fighting McAvoy. Mantha and McAvoy head to the box — each a minor for roughing.

During the 4-on-4 hockey that came from the roughing minors, Jake DeBrusk would score his second of the game off of another passing play by the Bruins. John Moore started the rush in Boston’s own zone, allowing DeBrusk to rush into the zone, passing it to Krejci. Krejci fed the puck to Carlo, who sent it back to Jake, deflecting it past Bernier. 7-2 Bruins.

Krejci’s assist on DeBrusk’s second goal of the game was the 400th assist of his National Hockey League career. Another big accomplishment for a Boston Bruins player tonight.

With less than a minute left in the game, Chris Wagner found himself in a fight with Nick Jensen after Jensen nailed Donato with a hit to the head. Even though there were less than two seconds left in the hockey game, Sean Kuraly wristed his first goal of the season to make it 8-2, yes 8-2 Bruins. They never stopped and played directly to the horn.

Boston now heads on the road to Calgary, Alberta, Canada for a game against the Flames on October 17th. Puck drop is currently scheduled for 9:30pm EST.