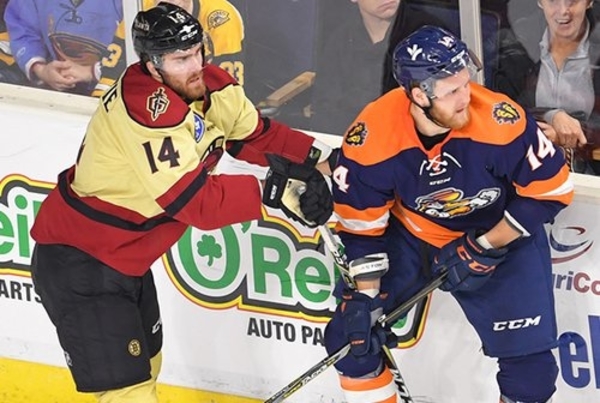 The Gladiators return from their weekend on the road with a point after a 3-2 overtime defeat to the Jacksonville Icemen and a frustrating 4-3 loss to the Greenville Swamp Rabbits. Atlanta fought hard and perhaps deserved more from the weekend, but what have we learned? Well, in case you’ve been hiding under a rock, the southern division is going to be very tough this year. Atlanta started the season with bags of optimism, but have been dealt some tough losses against divisional opponents, they currently sit 6th.

Against the Swamp Rabbits, Atlanta controlled large chunks of the game and created more chances, out-shooting them with 30 attempts on goal to 24. Despite this, Greenville put 4 past the Sean Bonar, punishing every mistake the Gladiators made. I think it’s fair to say that they could do with some luck, but the ECHL is an unforgiving league, the Glads will have to iron out the errors in order to start climbing up the league.

Jeff Pyle continues to tweak the roster as he tries to build the best team possible. The Gladiators have shown their intentions are still very much on success, spending the cash and making a huge trade for goaltender Colton Phinney and forward Shane Eiserman who join from league leaders, the Adirondack Thunder. Shortly after the trade was announced, Phinney was named as the ECHL goaltender of the week after going 2-0 with a .968 save percentage for the Thunder in his last 2 games. Following the departure of Miroslav Svoboda, I expect the second-year pro to slot straight into the starting role for Atlanta and will be a boost to the team.

Forward Shane Eiserman impressed in his 2 professional starts, bagging himself a goal and 2 assists. The Newburyport, MA native has represented the United States in competition, most notably at the U18 World Junior Championships. Tyler Moy also rejoined the Glads after a spell with the Milwaukee Admirals of the AHL. The forward scored in Atlanta’s season opener and after a stint in the AHL registered an assist against Greenville. In order to make room on the roster, the Gladiators confirmed the release of forwards Andrew Schmit and Luke Sandler as well as goalie Ian Sylves.

The Gladiators will face the Norfolk Admirals 4 times over the next 2 weeks. The series starts in Atlanta, with 2 games at the Infinite Energy Arena as the Gladiators look to bounce back from last week and leap-frog their divisional rivals. The Admirals will be confident heading into the series with 11 goals from their last 3 games, though they did also concede 9 times, so the Gladiators will be excited to get at them, especially on the power play which has been productive so far. If anything, you can expect a lot of goals. Back to back games against the same opponent almost gives this stretch a playoff vibe, I’m sure we’ll see the gloves come off as these divisional rivals clash. I hope that the Gladiators can thrive on the intensity. Whatever happens, we’re in for a good series against the Admirals.

This Week’s Gladiators To Watch:

Shane Eiserman: The rookie forward arrives in Atlanta carrying bags of potential. After scoring 3 points in his first 2 games as a pro, he’ll want to hit the ground running for the Gladiators. Coach Pyle likes what he sees from the 23-year-old, he’ll be given the freedom he needs to create and score chances.

Joona Koppanen: The Boston Bruins prospect has had a few games to adjust to life in the ECHL. As time goes on, his chemistry with the team is only going to improve. Don’t be fooled by his towering frame, he brings European flair to the ice, and as his confidence grows, he’ll be more than a handful for opposing defensemen.

Brett McKenzie: The rookie finally bagged his first ECHL goals against the Swamp Rabbits and had a really strong game. His first goals will no doubt give him added confidence. He enters the series against the Admirals in good form, now that the floodgates have opened, keep an eye on him.