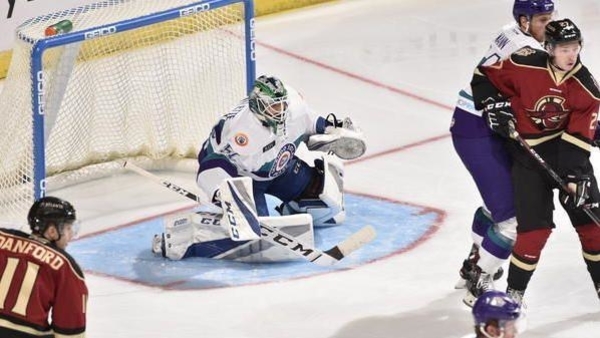 Atlanta began the season on the road to the Orlando Solar Bears, after a wild 6 goal 2nd period, the Gladiators won the contest 4-2. The game was scoreless until Matt Lane opened the floodgates in the 2nd frame, his first goal for Atlanta, assisted by Tyler Moy. The Gladiators doubled their lead during a power play when Moy himself tucked home a pass from Derek Nesbitt. The Solar Bears leveled the game with 2 short-handed goals just 23 seconds apart, the Gladiators punished for letting their foot off the gas, allowing the Orlando back into the contest. After a brief melee between the players, the Gladiators capitalized on the power play twice more with Olivier Galipeau and Joel Messner scoring their first professional goals and restoring the Gladiators 2 goal lead. The Solar Bears were unable to threaten Atlanta in the 3rd period, and the Gladiators left the Amway Center with the victory and importantly 2 points.

It’s been a busy week already for head coach and GM Jeff Pyle, with some changes to the roster. Boston Bruins prospect forwards Jesse Gabrielle and Joona Koppanen have been loaned to the team from Providence while forward Andrew Schmit was signed to a professional contract. Earlier today, Tuesday, October 16th, the Gladiators announced that forward Matt Lane was recalled by the Milwaukee Admirals in exchange for Zach Magwood who joins the Gladiators on loan. The team also confirmed the departure of Darby Llewellyn who joins the Rapid City Thunder in a trade for future considerations.

Jesse Gabrielle joins after falling out of favor in Providence, the 21-year-old will be determined to prove himself in Atlanta and brings bags of potential to the Gladiators. Koppanen will start his first full season as a pro and some time in the ECHL will allow him to adjust to the American ice. He did manage to score a pair of goals for the Providence Bruins after featuring for them late last season. Andrew Schmit will provide some grit and experience to the Gladiators roster after representing the Indy Fuel and Wheeling Nailers last year.

BREAKING: The #NHLBruins have loaned forwards Jesse Gabrielle and Joona Koppanen from the @AHLBruins to the team. The Gladiators have also signed tough forward Andrew Schmit. #BrothersByBlade ⚔

The Gladiators have a busy weekend ahead of them with 3 back to back divisional games starting on Friday at home to the Greenville Swamp Rabbits. On Saturday night the Orlando Solar Bears head to Duluth in search of revenge from game 1 and the Gladiators will be on the road against the South Carolina Stingrays on Sunday. After a strong result last week the Glads will look to carry that form into these 3 games. Divisional games always have an added intensity, so these games promise excitement. The influx of talent from Providence will certainly be a boost to the team, and coach Pyle will hope that the new players can settle into the squad quickly and start contributing right away.

This Week’s Players To Watch:

Tyler Moy: The Nashville Predators prospect bagged himself a goal and assist in game 1, and the 23-year-old looked solid on his ECHL debut. The California native will be looking to bounce back from a fairly disappointing season in the AHL last year. An absolute menace in the attacking third, expect some points from him this weekend.

Miroslav Svoboda: In his first game for the Gladiators, Svoboda saved 30 out of 32 shots and looked comfortable for most of the game. He made some very good stops to keep the Glads ahead. Another Predators prospect on the Glads roster, he will certainly look to make an impression much like Providence Bruins goaltender Dan Vladar did last season.

Olivier Galipeau: He was on my radar last week and will be on it again heading into the weekend. The defenseman had a solid outing for the Gladiators last week picking up both a goal and assist on his professional debut. He looked particularly threatening on the power play, and his long-range effort against the Solar Bears would have troubled any goaltender. The Bruins prospect looked sharp and will be a constant threat with opponents in the penalty box.