Bruins’ Nordstrom, Donato Will Push Each Other

We’ve all heard the phrase “follow in your footsteps” before. But for Ryan Donato, skate strides seems a more applicable substitution. And since the young B’s forward was substituted out of his second-line duty against the Edmonton Oilers on Thursday night, he had a front row seat from the press box at TD Garden to pay attention to exactly said skates and said strides — both of which belonged to Boston newcomer Joakim Nordstrom, whose play will undoubtedly help Donato make his very own strides as he develops his NHL game. To wit:

Nordstrom showcases his strength along the wall, wins a puck battle, makes a pass, crashes the net and pumps in his first to give the Bruins a 3-1 lead.

“Strength along the wall” is exactly what I said aloud after watching the versatile veteran plow past three Oilers then turn on the jets for a classic give-and-go with David Krejci for the B’s third goal of the game — a game that Donato (with his birds-eye view of the ice) could see fully develop, I assume, from end to end and rush to rush. This is the perfect kind of on-the-job lesson-learning that Coach Bruce Cassidy was hoping for the promising 22-year-old to witness (as he did last year a few times), just like fellow up-and-comers Jake DeBrusk, Anders Bjork, Matt Grzelcyk and others all experienced at one point or another last season for a few games. And it was also the perfect time for Cassidy to make the switch, tweak his lines and motivate his team — motivation that the eager-to-make-a-good-impression Nordstrom definitely took advantage of.

“It felt great. Just trying to help my team win – do whatever it takes – it’s a nice reward.”

How will both players now take advantage of their own skill sets after one found immediate success on the ice while the other made mental notes off the ice? Well, my guess is that Donato will not want to be regulated to press box duty again and will use the play of Nordstrom (that I’m hoping he paid attention to all game long) to understand the importance of moving his legs in the battle areas and up against the boards. This, naturally, will make future net drives more fruitful for both he and his fellow linemates.

Ryan Donato knows being a healthy scratch will make him “pissed off” because he wants to get back in the #NHLBruins lineup https://t.co/2NDS7SEXRW

There’s not one person on the Bruins, in the NHL or on Team USA who doesn’t believe in Donato’s highly skilled ability to score goals with his snipe of a shot. So, here’s hoping Donato will now believe more in himself and use the play of Nordstrom as not just motivation, but also realization that he can be an effective (even dominant) two-way player whose responsibility with the puck will lead to offensive rewards. 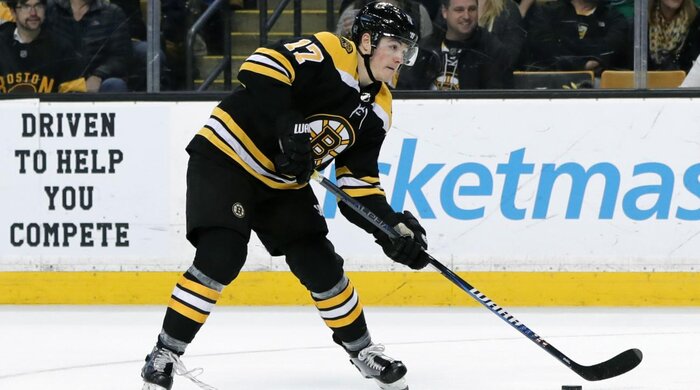 As for Nordstrom, he now has a taste for goal scoring in a B’s uniform and will want that taste to linger like a fine wine (a bottle of Rosè Ruzicka anyone?) AND for many more games in Black N’ Gold. He knows what it will take to stay in the lineup and he’s proven, at least for now, that he can handle that Cassidy-charged responsibility by bringing energy, toughness and a scoring touch to his play. Additionally, there’s the natural, even instinctual desire as an athlete, to not let anyone “take your job away,” especially after you’ve had success doing it. So, you can count on him also knowing that Donato will be chomping at the bit for a return to action and ready to puck pounce when the opportunity is given.

That being said, the end result should be both Nordstrom and Donato continuing to push each other to improve in all facets of their game, in particular the “s’s” –strength, speed, skating & scoring (with a sprinkling of skill). If the B’s brass are fortunate enough to witness that on the ice from their similar off-the-ice view recently shared by Donato (but not for long, right?), then you can count on a successful succession of each player following in the other’s footsteps … I mean, skate strides … all season long.