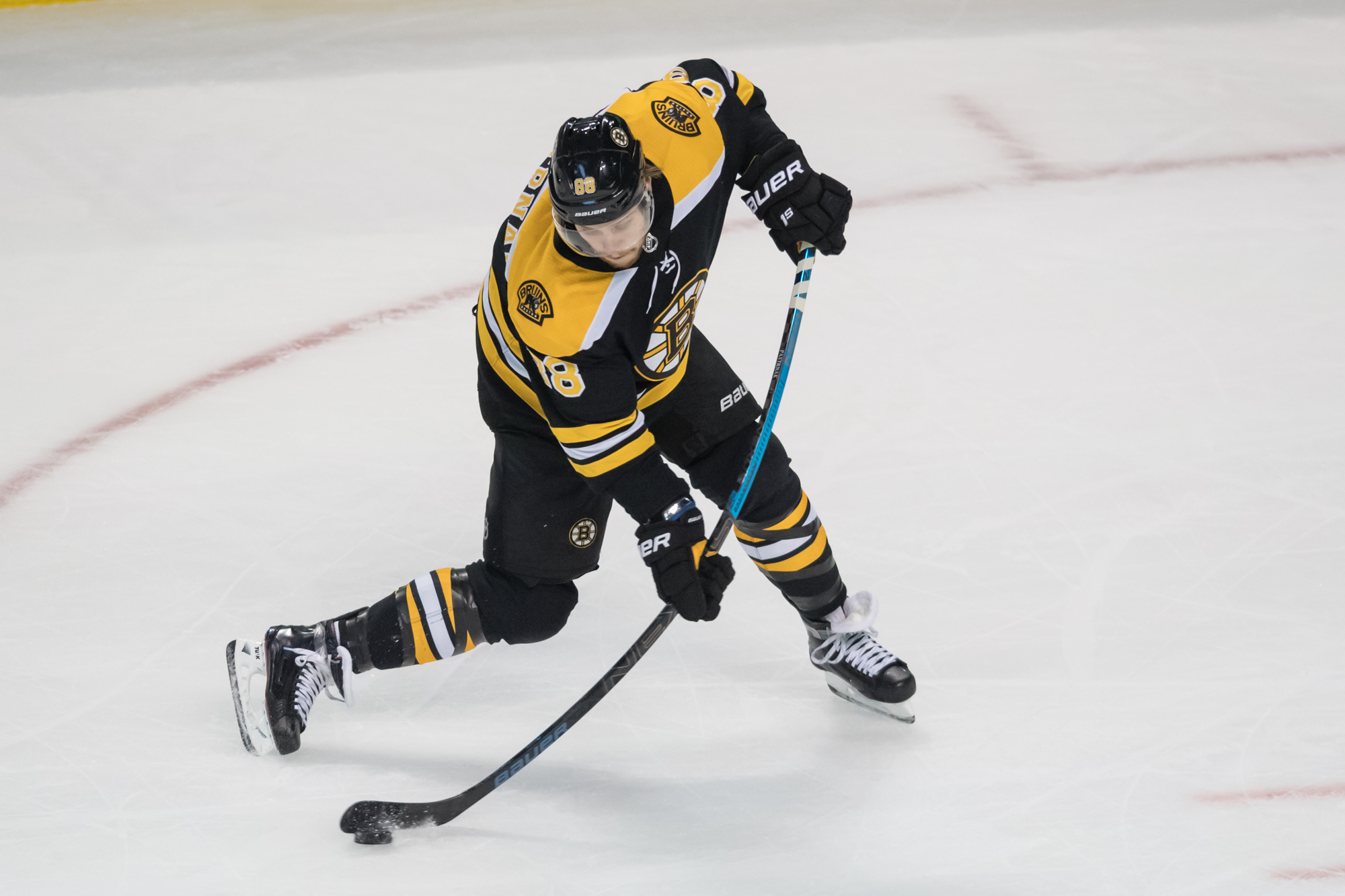 For more info check out the preview for tonight’s game against the Oilers written by Drew Johnson.

Are you ready for some #NHLBruins hockey? Get warmed up for their matchup against the #Oilers https://t.co/lehrQQnvJI

The game got off to a fast-moving start as both teams came out ready to go. Neither team got any great scoring chances early on as they seemed to be feeling each other out. Connor McDavid got the Oilers off and running with a burst of speed through the neutral zone, which led to his first goal of the season with 16:17 to go in the period.

BREAKNECK speed from the best player in the NHL Connor McDavid

After the McDavid goal, the Bruins fourth line came out firing with a great shift which included a big hit by Chris Wagner on Jujhar Khaira. The B’s would go to the power play as Adam Larsson took an interference penalty with 11:48 to go in the frame. David Pastrnak scored on the man advantage on an absolutely ridiculous individual effort to tie the game with 10:38 to go in the period.

With 6:06 to go in the period, Khaira took a boarding penalty which resulted in John Moore being hit hard into the side boards. Brad Marchand made it two power-play goals in the period as his attempted pass went into the net off of Drake Caggiula to give the Bruins the lead.

Brad Marchand’s 1st of the season comes on the PP, 2-1 #NHLBruins pic.twitter.com/bxlynPedGN

Just 36 seconds later, Joakim Nordstrom got rewarded on a two-on-one to give the Bruins a two-goal lead after a nice feed from David Krejci.

Charlie McAvoy went to the box for interference with just 3:15 to go in the period as the Oilers would get their first power play opportunity. Just 33 seconds into the power play, Marchand broke loose and forced a slashing penalty on Oscar Klefbom, resulting in a four-on-four situations. The Oilers would kill off the abbreviated Boston power play as the period drew to a close.

The Bruins came out hungry in the second period trying to extend the lead as they piled up a few good scoring chances. Kevan Miller and Khaira got into a fight early in the frame as retribution for Khaira’s hit on John Moore in the previous period.

The game began to open up as both teams were able to find ample space to work. The nasty factor also started to pick up as the physical play all of a sudden ramped up as David Backes, and Caggiula dropped the gloves. Extra penalties resulted in another four on four situations but neither team was able to find the back of the net. The game continued to move quickly without many whistles, but neither team was able to find any scoring chances. The physical nature continued late in the period which made it seem like we were witnessing hockey from 2011 as neither team gave an inch. Sean Kuraly channeled his inner Milan Lucic as he checked Matt Benning through the glass on the end boards.

Danton Heinen took a tripping penalty late in the period as the Bruins tried to maintain their two-goal advantage. The period ended with the Oilers still on the power play with 25 seconds remaining.

A few big saves by both Jaroslav Halak and Cam Talbot kept it a two-goal game early in the final period. The Oilers began to storm the Boston end towards the midway point of the period, pushing for a goal to make the game closer. The physical play continued as McAvoy and Caggiula got tangled up.

The B’s had a near miss as Ryan Nugent-Hopkins hit the stick side post of Halak and the puck rolled along the goal line before Zdeno Chara knocked it away.

Ryan Nugent-Hopkins was THIS close to cutting the gap down to onehttps://t.co/ETIwdSXGNi pic.twitter.com/GmQTtmbsWR

The Bruins would go the power play as Jesse Puljujarvi took a high-sticking penalty with 8:53 to play. Tobias Rieder had another shorthanded opportunity for Edmonton, but Halak made an important save to keep it a two-goal lead. The Bruins failed to score on the power play as they virtually had no real scoring chances and the game remained relatively close.

The Oilers pulled Talbot with about two minutes to go as they made one final push. Patrice Bergeron finished it with an empty-net goal with 34 seconds left.

Patrice Bergeron with the empty netter and the Bruins will close the Edmonton Oilers by a 4-1 score. Bergeron with his fifth goal in the last three games

Pastrnak. Number 88 scored his fourth goal of the season in what was an incredible effort and was everywhere on the ice on Thursday night.

Halak. It wasn’t a particularly busy night for the Bruins backup, but he came up big with a few important saves in the third period to keep the Oilers at bay.

Nordstrom. Inserted into the lineup for Ryan Donato, Nordstrom not only scored a goal but gave a consistent effort all game and didn’t look out of place at all.