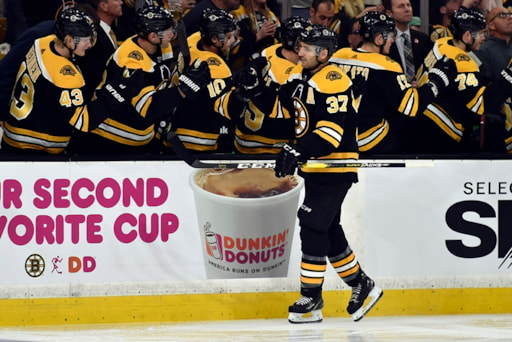 The last time the Bruins and Senators met, Patrice Bergeron scored a hat-trick in a 6-3 victory in Boston’s home opener. Since then, things have been rough as the Bruins have lost their last three games on the road. They came into this one look to find the win column away from home.

Jake DeBrusk rung iron early, under a minute into the game within a series of decent chances from the top two lines early. Zdeno Chara nearly sprung Anders Bjork free in the neutral zone with a stretch pass, but to no avail, as the puck slid past Bjork for icing. The urgency was clearly their early. Less than three minutes into the period, the shots were 6-0 Bruins. Patrice Bergeron managed to catch an attempted pass through the slot with the inside of his foot, but couldn’t bury it amongst the scrum that ensued in Ottawa’s crease. Urho Vaakanainen took a forearm to the face from Mark Borowiecki away from the puck that shook him up a bit – a questionable non-call from the referees. Vaakanainen can be found in the bottom right of the frame in the picture below.

Fast forward about a minute later, Zdeno Chara found himself in the box for hooking with 16:01 remaining in the period. Ottawa had some solid chances, none better than a wrist shot from the slot from Bobby Ryan that snuck past Rask, nearly crossing the goal line and giving Ottawa a 1-0 lead.

The Ottawa power play seemed to wake the Senators up a bit. Ryan Dzingel and Tom Pyatt saw some good-looking chances come their way with speed not too long after it. Ottawa evened up the shots at eight just past the halfway point of the first period, after being outshot 6-0 early.

This is becoming a common theme – David Pastrnak scored. With 8:43 left in the period, Pastrnak waltzed into the offensive zone from off the bench and ripped one right past Craig Anderson. After some intense back-and-forth, the Bruins break the ice on Pastrnak’s ninth goal of the year, assisted by Danton Heinen.

Chances went back-and-forth for the remainder of the period, but the one-goal advantage stuck in Boston’s favor headed into the second intermission. The shots were 15-10 in favor of the Bruins.

The second period started off rough for the Bruins as Ottawa managed to maintain offensive zone for 1:14 of even strength time at one point within the first three minutes. Five-and-a-half minutes in, Noel Acciari found himself in the box for tripping, giving Ottawa an opportunity to get on the board early in the period and turn the tide. Ottawa failed to convert and the score remained 1-0.

For the majority of the period, it was all Ottawa in terms of shots, as with around five minutes left in the period, the shots were 8-1 in favor of the Senators. Matt Grzelcyk was on the receiving end of a big hit from Zack Smith –one in which Brad Marchand responded hastily to. Marchand then challenged Smith to a scrap to stick up for his boy Matt Grzelcyk. In a fairly lackluster period, the Bruins needed a spark like that from one of their leaders in Brad Marchand.

Zdeno Chara found himself in the box for cross-checking with 3:41 left and a visibly angry look on his face. This time, Ottawa took advantage of the power play thanks to a one-timed slapper of the stick of Thomas Chabot with 2:09 to go.

Alex Formeton sat for two not too long after the goal for holding the stick. Ryan Dzingel joined him due to a hook on David Pastrnak. It didn’t take long for David Krejci’s second goal of the year to capitalize on the 5-on-3 advantage, assisted by David Pastrnak and Patrice Bergeron.

With a 5-on-4 still intact after the goal, Pastrnak saw some nice scoring chances late, only to be stopped by Craig Anderson as the second period came to a close. The shots after two were 24-22 in favor of Ottawa. It was another solid period for Tuukka Rask in net. Bad news came during the intermission as it was confirmed that Urho Vaakanainen was ruled out of the game due to a concussion. Tough blow for a young player in his second career NHL game.

With Urho Vaakanainen out of the fold for the rest of the night, the Bruins entered the third with five defensemen. Some gameplan adjustments need to be made by Bruce Cassidy and crew.

Just 21 seconds into the third frame, Pastrnak sent one towards the net to be deflected by Bergeron past Anderson. Going up by two goals less than 30 seconds into a period is always welcomed. The goal marked Bergeron’s seventh of the season.

Brandon Carlo bailed out his Tuukka Rask with this nutty save. Rask came out to play the puck, had a second shot bounce off his torso, setting up this save for Carlo.

.@1996_Carlo with yet another save! pic.twitter.com/Ed7zga0brS

It’s double digits for Pastrnak. Brad Marchand took Dylan DeMelo’s lunch money with a filthy toe-drag and dished it to Pastrnak back door. Some sick puck work on display to make it 4-1 Bruins. Shortly after, Zdeno Chara found himself in the sin bin again, this time for a trip on Bobby Ryan.

Marchand dangles and sets up Pastrnak for his 2nd of the game, 4-1 #NHLBruins pic.twitter.com/yfZ3eiXxhJ

Tuukka Rask kept his impressive performance going throughout the third period as Ottawa continued to put decent pressure on him and the defensive core. He came into the game 4-0-1 in his last fives against the Senators, without a shutout in the mix.

Sean Kuraly nearly buried one within the final ten seconds like he did against Detroit, this time on a wraparound. It’s a 4-1 final for the Bruins over the Senators in Ottawa. Despite 39 shots from Ottawa, the Bruins kept control pretty consistently and picked up two big points over a divisional opponent. The final shots were 39-27 Ottawa. Tuukka Rask made 38 saves. The Philadelphia Flyers are up next on Thursday at 7 PM as the Bruins return home from their four-game Canadian road trip.