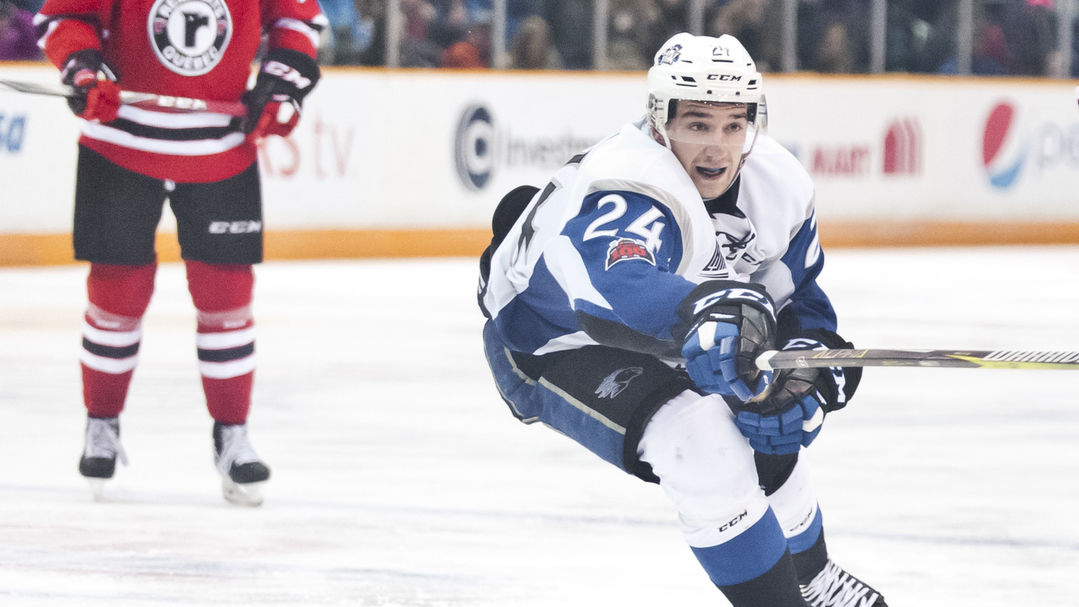 Boston Bruins prospect forward Cedric Pare has certainly been through the trials and tribulations when it comes to the roller coaster ride of developmental hockey in the Canadian Major Junior Leagues. A former first-round selection of the QMJHL  Saint John Sea Dogs as a rookie in the 2016-17 campaign he along with talented teammates such as B’s defensive prospect Jakub Zboril, along with blueliner Thomas Chabot and forward Joe Veleno had an outstanding regular season to set themselves up to be serious players for a long playoff run.

With the 173rd pick in Round 6 of the #NHLDraft, #NHLBruins select Cedric Pare. pic.twitter.com/HAE46ifVTG

After that successful regular season (2016-17) that captured 102 points in the 68 games, Pare and his Sea Dogs team would also have the energy and the will to truck through the 2017 playoffs. The Sea Dogs swept the Rimouski Oceanic in the first-round best-of-seven, swept the Val-d’Or Foreurs in the second-round best-of-seven, lost two games to the Chicoutimi Sagueneens in that best-of-seven, to sweeping the Blainville-Boisbriand Armada in the Conference final to capture the Presidents Trophy as the QMJHL Champions. With the league championship in hand, Cedric and Saint John organization punched their ticket to the 2017 Memorial Cup making it to the semifinal game after having a 1-2 record in the previous round-robin tournament.

The Sea Dogs just couldn’t keep up with the better-skilled Otters club, losing 6-3, sending the team home after a noble effort. The 2017-18 season where many thought the Sea Dogs club could possibly come close to having the similar success of the year prior came back to earth when the team finished last place on the whole earning 39 points in 68 games. For Cedric, it was tough to see so many talented players that he got along with leave the organization, but he had the mindset to stay focused and work harder as he earned a top-six role with departing talent. Although the team struggled for the rest of the season, and six players traded away including talented forward and 2018 NHL Red Wings draft pick Joe Veleno, the Sea Dogs were in a rebuilding and it was just a matter of time before Pare — one of the highest players of value on the team — was to be moved as well.

On June 1, it became official that Pare was in fact traded as the Sea Dogs continued to look for future sustainability through upcoming drafts and rebuild the squad properly to be back in contention as one of the best teams on the “Q” for years to come. Cedric was traded to the Rimouski Oceanic, who already were building up for something good and after the Bruins released him from NHL training camp on Sept. 19, he went to his new junior team with a mindset of a fresh start without sulking or a failed attitude. The Bruins sixth-round selection in 2017 instead went into the 2018-19 season on a mission to not only impress new fans and management in Rimouski but also make a statement in his development showing that he deserves a roster spot next season as he’ll be eligible to play in the American Hockey League full time as he’ll turn 20 in January of 2019.

I strongly believe Pare is in a better place to succeed with the Oceanic club, and he’s certainly on pace to have a better year offensively than he did with the Sea Dogs. Last season the 6-foot-3, 210-pound center in his second full season in the QMJHL had 13-24-37 numbers in 60 games which offensively speaking was doubled from his rookie season in 2016-17 when he contributed 16 points in 64 games. What sticks out to me this season above previous years is his start and determination with his new team. Players can be streaky, but if you watch his game this season, he just looks different and engaging in all different scenarios. For instance, if you look at his year-to-year stats, he had one point in his first eight games in his rookie season, two points in his first eight games in his second season to this year with a new Oceanic team having eight points in his first seven games.

Unfortunately, Cedric snapped his longest point streak of the season tonight but as humble as a player he is I’ll bet from interacting with him over the last two development camps and rookie camps he’s more happy with the big Canadian Thanksgiving win today. Pare and the Oceanic beat the Shawinigan Cataractes by the score of 8-1 on the road and get back on the ice on Wednesday night October 10th at home against Chicoutimi and Saturday night Oct. 13 to round out the week again at home against Cape Breton.