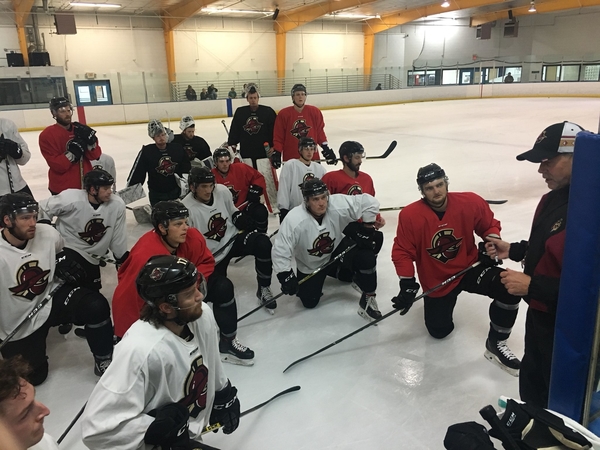 The 2018-19 Atlanta Gladiators training camp is in full swing. New Ownership marks the beginning of a new era in Georgia, and preparations are underway for what promises to be an exciting season. The return of head coach, Jeff Pyle, has created a genuine feel of optimism amongst the players as well as the supporters. Roster spots are up for grabs with senior players away on AHL tryouts, so there’s strong competition in the camp with everybody trying to impress the new bosses. Training camp ends on October 7th, so the clock is ticking for players eager to earn their place.

The Gladiators management have been busy with a number of players returning to Atlanta after AHL try-outs, and some new faces joining the squad. Branden Troock, Darby Llewellyn and Jack Stander returned from try-outs with the Milwaukee Admirals, in addition, the Gladiators also loaned forward Alex Overhardt from Milwaukee. Ben Danford returns from the Chicago Wolves, and Luke Sandler is back from the Rockford IceHogs. On Monday, October 1st, the Gladiators announced that 6 players had been added to the squad from the Providence Bruins. The AHL affiliate have loaned defenseman Olivier Galipeau and forward Brett McKenzie, and assigned defenseman Joel Messner to Atlanta. Sean Bonar, Zach Malatesta, and Tyler Deresky have been released from their try-outs with Providence and will report back to the Gladiators. On Tuesday, October 2nd The Milwaukee Admirals loaned forwards Tyler Moy and Carl Persson, and assigned Matt Lane to the Gladiators. The team also confirmed that Zac Sikich, Alfred Johanson, Hunter Stewart, Matt Harrington, and Robbie Hall have been released from their PTOs.

The Gladiators have been very clear in their expectations for the new season. Coach Pyle has high standards and will be aiming to go one step further than his previous tenure in charge of the team. When discussing his first stint with the Gladiators, Pyle claimed: “This place was special in my heart, I helped build it, I helped being part of a really good thing and I want to bring that back.” With the support of new team owner Dan Orlich, Pyle has every opportunity to finish what he started in Atlanta, it’s clear he’s hungry for success. The players seem to be buying into Pyle’s approach with Gladiators captain, Derek Nesbitt, claiming “I’ve known him for 14 years, he just brings a lot of positivity to the game and to the locker room, just every day it’s a fun place to be, and you get excited to be here”. It’s important for a team to have belief in the system and the early signs suggest that the players share the team’s ambition and vision for success.

It’s not long before we get to see the team in action, on Thursday, October 4th, the Gladiators will head to Greenville to take on the Swamp Rabbits in their only official preseason game against a league opponent. Training camp concludes with an intrasquad exhibition game which has been arranged for Sunday, October 7th, giving the players one last chance to impress coach Pyle as he prepares his final roster ahead of the 2018-19 season. The Gladiators start their quest for the Kelly Cup on the road against the Orlando Solar Bears on Saturday, October 13th. Keep an eye on BlackNGoldHockey.com for updates throughout the season.