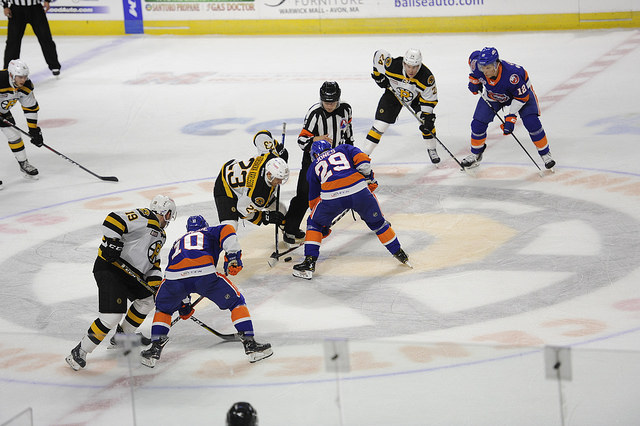 It is still early, but there was something to smile about this weekend for Providence Bruins fans.  Colby Cave extended his scoring streak to 5 goals in 4 games and the team saw some marked improvements all around. The back-to-back games against the Bridgeport Sound Tigers finished with an overtime loss on Friday and a runaway win on Saturday.  This gave our team 3 points for the weekend bringing the total for the season up to 5, still just ahead of the Hershey Bears in the division.

As a team, they did a better job of keeping on the puck and making a more consistent effort throughout the game and not just in the third period.  Our power play effort was once again an area for concern as we went 0 for 6 this weekend, but the penalty kills were a success, preventing the Sound Tigers from sinking even a single shot in their 9 power play opportunities.  One area Jay Leach will undoubtedly be reviewing with the lads this week is the excess of penalties we are handing over.

Dan Vladar manned the net on Friday in Bridgeport and stopped 30 of the 34 shots on goal bringing his save percentage down to .896.

Zane McIntyre stood guard on Saturday in Providence and stopped 25 of the 27 shots on goal bringing his save percentage up to .813. 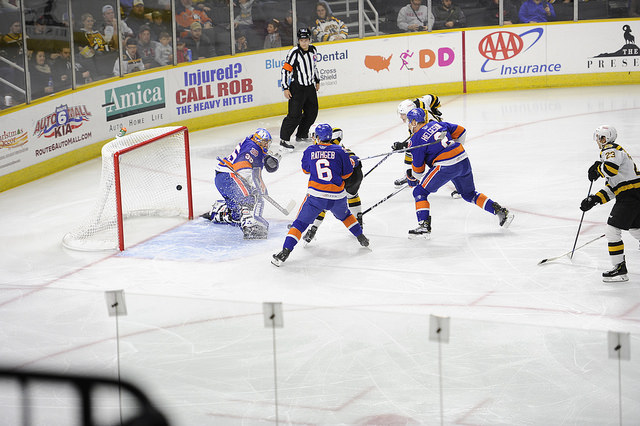 Webster Bank Arena came alive Friday for the first meeting of the Sound Tigers and the Providence Bruins.  The crowd of 3,065 who attended to see the grudge match would not be disappointed as it was a tight one throughout with multiple lead changes and an overtime to boot.

The first period saw Bridgeport come out in a whirlwind, as Toews and Rathgeb set up Dal Colle to score only 3:15 into the period.  Not impressed, Colby Cave answered back with an unassisted goal at 7:20 for Providence bringing the score level. Three penalties, 2 to Providence and 1 to Bridgeport, were handed out before the horn sounded to mark the end of the period. Not a six-penalty period as we saw last weekend, but we could be nearing the 24-penalty minute average per game if they keep it up. 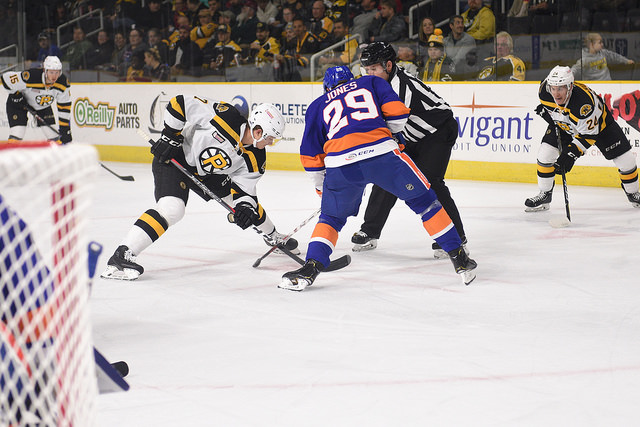 The first half of the second period was one that you could watch while standing in line at the concessions.  There was a lot of back and forth, a few scrambles for the puck and several shots on goal, but nothing to write home about.  Until the 18th minute when Jakub Zboril took the help from Martin Bakos and Cameron Hughes and sent one home to put the Baby-B’s in the lead by a score of 2-1.  Three more penalties issued this period.  This time 2 to Bridgeport and 1 for Providence and we are only at 12 PIMS for this game…looks like that average could be in danger of coming down a notch or two.

Not satisfied with ending the period behind by a goal, the Sound Tigers came out to open the third period with a goal at 0:42 to bring them level again.  This time Rathgeb got the point, and Aho and Dal Colle were there with the apples. That goal was followed by 3 Providence penalties and finally a Providence goal at 17:49 from Colby Cave assisted by Jacob Forsbacka Karlsson to once again put Providence back on top (3-2).  The lead would not stand though as with 41 seconds left in regulation Wotherspoon, assisted by Chris Bourque and Seb Aho, was able to tie it up for the Sound Tigers and force the game into overtime.

Word is AHL looked at Fri. night play where P-Bruins' Jordan Szwarz hit his head on ice after skates were kicked out by Bridgeport's Parker Wotherspoon. Decided on no supplementary discipline. No penalty on play. Szwarz out with concussion

Overtime was but a blink of an eye when at 0:32 Sislo placed the final nail in the coffin for the night and sent the Providence Bruins home with their first OTL of the year.  The loss was even more heartbreaking after having led twice in regular time and having not trailed since the third minute of the first period. Perhaps, the greatest loss of all for the team this night was that of their Captain, Jordan Szwarz, who was later diagnosed with a concussion after hitting his head on the ice when his skates were kicked out by Bridgeport’s Wotherspoon.

Still feeling the sting of the overtime loss the previous night in Bridgeport, the Providence Bruins came out with a renewed vigor that we have not seen in our Baby-B’s this year.  Judging by the ferocity of the game the Sound Tigers were also a little charged up due to their win.  Whatever numbers were lacking in penalty minutes last night were surely made up for tonight, with a whopping 38!

The first period saw Providence get on the board first with a goal by Cameron Hughes assisted by Jakub Zboril at 1:51. Ensuring his scoring streak would not end, Colby Cave nailed one home less than 2 minutes later with the help of Jeremy Lauzon and Anton Blidh at 3:13.  Apparently, this back to back goal pair did not sit well with Bridgeport’s Jones as he threw down with Trent Frederic at 3:26 and both received 5 minutes for fighting. Other than three more minor penalties that period, no other action was had, and the horn sounded the end of the first with Providence in the lead 2-0. 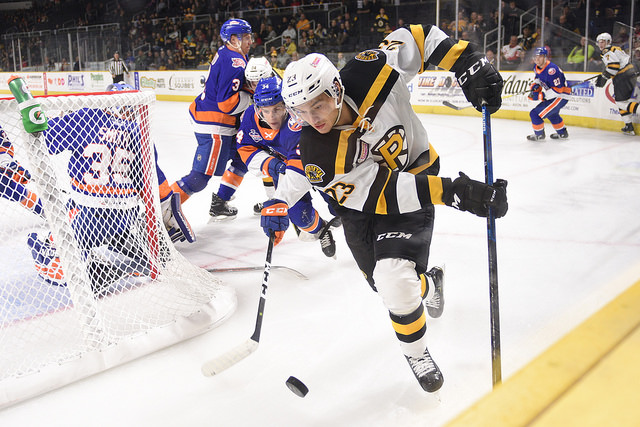 The second period began with a minor penalty to Bridgeport followed at 9:11 by another round of fisticuffs.  This time Bridgeport’s Helgeson took on Wiley Sherman.  Once these two hooligans were locked away for their respective 5 minutes, Frederic took the opportunity to raise the Bruins’ lead by one with the help of Karson Kuhlman and Atlanta Gladiator call-up, Joel Messner. Bridgeport was down, but not out and scrambled to make the plays they needed to get a point on the board. Finally, at 13:22 Dal Colle assisted by Hitchcock ended McIntyre’s bid for a shut-out and got their first point on the board.  Unfortunately, being charged with a penalty for roughing was the only other call the Sound Tigers would get before the second period ended with the Bruins up 3-1.

As the third period began, it seemed like the Bruins were making up for lost time, with two goals again being scored nearly back to back.  Lauzon assisted Kovar at 0:41 with the first goal and 30 seconds later Frederic made it 5-1 Providence with assists from Cehlarik and Clifton.  However, the Sound Tigers were not done yet, like a cat being cornered they clawed and fought and were able to capture one more goal at 8:59 from Sislo assisted by Wotherspoon and Casto.  As hard as they fought and as much as they tried, they could not overcome the determination that lay behind our Providence Bruins on Saturday Night.  The Bruins walked away with a 5-2 victory their first regular season win at home this year, extending their “at-home win-streak” against the Sound Tigers to four!!!  Keep it up Baby-B’s, We are behind you all the way!