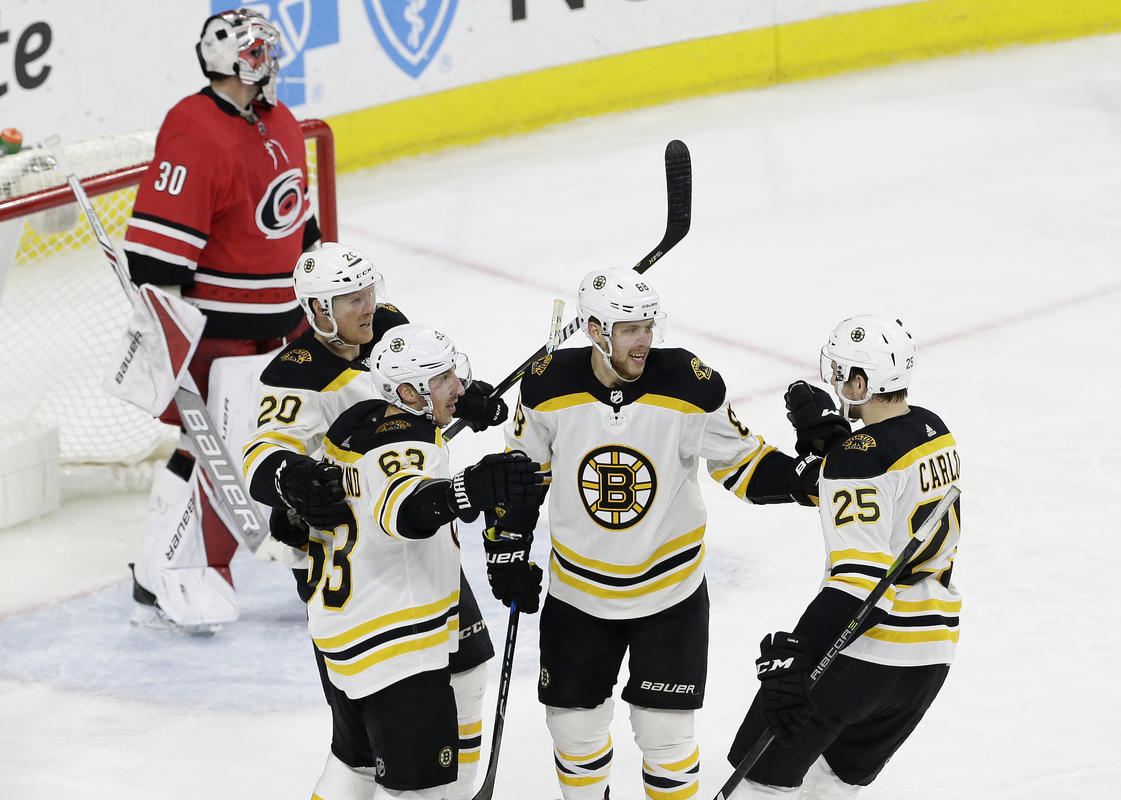 Since opening the season with an appalling 7-0 loss to the Stanley Cup Champion Capitals, the Bruins have gone 6-3-1 in the next ten games. It’s not a particularly impressive record, though, when it is taken into consideration that they’ve played mostly bottom-feeding teams, including Buffalo, Ottawa, Vancouver, and two games against Edmonton, one of which was an overtime loss.

That’s not to say the Bruins are a bad team, though – they’ve been inconsistent for a good reason. There are several factors at play – injuries to Torey Krug, Charlie McAvoy, David Backes, and Kevan Miller have caused some upheaval in the roster. This poses a particular problem in that the roster hadn’t been completely figured out, to begin with, since the team was unsure which players would play the roles of second-line right wing, or third line center.

But hey, maybe there’s good news on the horizon:

The next week of games is going to be interesting as it includes one team that is coming together after a few years of rebuilding and another that has been at or near the top of the standings for a long while.

The more interesting opponent the Bruins will face this week, the Carolina Hurricanes, are 6-4-0, and look like a whole new team – and considering the moves they made in the offseason, they pretty much are. Ward, Skinner, Nordstrom, Hanifin, and Lindholm were shipped out. Hamilton, Ferland, de Haan, Fox, and Mrazrek are in. They also drafted Andrei Svechnikov, who made the roster out of training camp. Former Canes captain Rod Brind’Amour was brought on as bench boss.

Jacob Slavin has really come into his own, and playing alongside fancy stats darling Dougie Hamilton this season certainly hasn’t hurt. The two should make an impressive – if very young – top pair. The Hurricanes’ defense is greatly improved, with the second pair of de Haan and Justin Faulk, and a third pair that contains Trevor van Riemsdyk and Brett Pesce. Pesce had typically been Slavin’s partner in the past.

The forwards are an interesting bunch as well; Sebastian Aho leads the team in points with 16. He and his linemates, Teuvo Teravainen and Micheal Ferland, have combined for 37 points in eleven games. Left-wing Warren Foegele is playing with two old men in Jordan Staal and captain Justin Williams, and they’ve found chemistry as well, combining for 19 points in 11 games.

Hurricanes 3, Red Wings 1 had me thinking about expectations and how quickly they can change. We're expecting a lot out of this Canes team all of a sudden, and they're expecting the same. https://t.co/SZQgrHcMHU pic.twitter.com/kzIVam8QqQ

Another improvement Carolina made in the offseason is that they became fun. It may sound ridiculous, but these guys are having a blast, and you can tell that they know they’re all in it together – they’re a team, after all, and they’re acting like it. Everyone is getting involved. See examples below.

Figure a: The day “The Floss” officially became uncool

This video belongs in a museum pic.twitter.com/wHfRW38xmz

It's never a dull moment when the @NHLCanes get the W. 😂 pic.twitter.com/fah3xjfIoM

The Canes are 3-2 in their last five games, and they are coming off of a 2-1 loss to the Islanders. It’s not unreasonable to think they’ll want to prove themselves against a team like the Bruins since they’ve only beaten two teams that aren’t considered the bottom of the barrel in Columbus and San Jose.

The Predators have been among the league’s best for a number of years. They’re defensively solid without being offensively stunted, which can be a hard thing to achieve in today’s NHL. Other than re-signing their own players, Nashville didn’t make any significant offseason moves, but they didn’t have to, either. For some reason, they added Zac  Rinaldo, but that is not a significant move and certainly doesn’t improve their team in the slightest. He’s still Rinaldo, after all.

Rinaldo taking a penalty immediately after making a breakout pass to setup a two-on-one is the most Zac Rinaldo sequence I've ever tracked. Couldn't even wait for the Preds to get a shot off.

The Preds are 8-3-0 and are at the top of the Central Division. Their last game was a 5-3 loss to Edmonton, where leading scorer Filip Forsberg (10-4-14 in 11 games) provided the only offense, scoring a hat-trick in vain. He had a ridiculously good game against the Oilers.

New Monday staple – Weekend Warrior, given to the player with the best single-game performance on the weekend. We swear this isn't clickbait but in addition to his hat-trick, you're not going to believe what Filip Forsberg accomplished on Saturday. #Preds https://t.co/PymEnlFRBV

This week will most definitely present some challenges for the Bruins. They will be playing against two solid teams and dealing with their own injury-riddled roster. They will need to be consistent, and figure out a cleaner way to move the puck out of the defensive zone without defenseman Torey Krug, whose absence has been glaringly obvious. Hopefully, they’re able to hold it together and get at least two out of a possible four points.