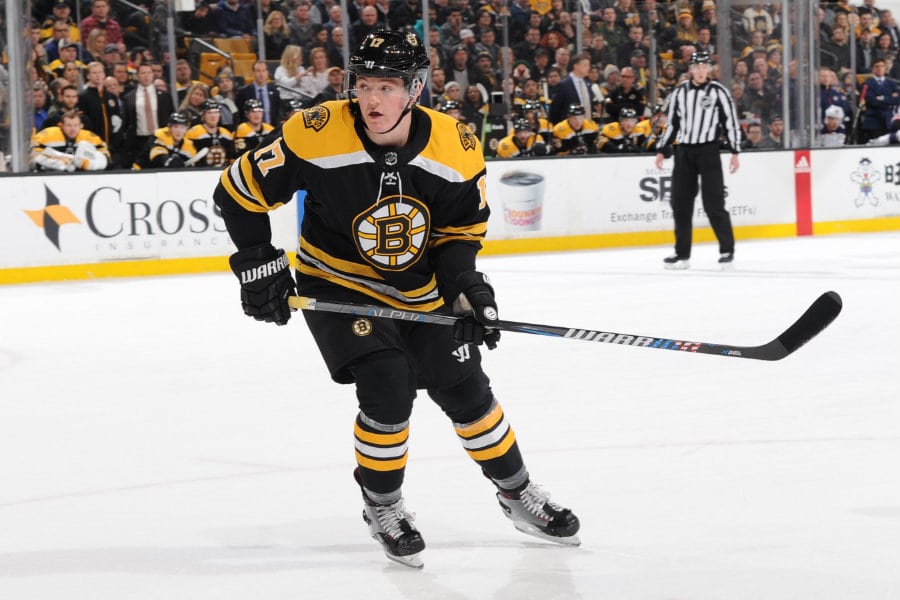 On November 1st at roughly 4:00pm Eastern Standard Time, the Boston Bruins have announced that forward Ryan Donato has been assigned to the Providence Bruins of the American Hockey League.

Bruins announce that they have assigned Ryan Donato to Providence.

The 22-year-old Boston, Massachusetts native was the subject of high praise during the offseason, but the 2014 2nd Round Selection has only scored one goal in eleven games for Boston this season. Donato has not been able to find his groove offensively, especially considering the nine points in twelve games he had at the end of the 2017-18 campaign.

Since the season began, Donato has been rotated all throughout the Bruins lineup by Head Coach Bruce Cassidy, playing anywhere from the second to the fourth line, with many different line combinations, but to no avail thus far, even with some decent games where the opportunities came in numbers. Against the Canadiens on October 27th, Donato had a goal waived off due to an offside call that was discovered via a Coach’s Challenge.

The Bruins are mainly looking for some help offensively as well. Aside from the first line of Brad Marchand, Patrice Bergeron, and David Pastrnak, the Bruins have struggled to consistently score goals. David Krejci and Jake DeBrusk have done a decent job tallying points, but the remainder of the forward depth has gone dry.

Clearly, the Bruins want Donato to build his confidence a bit more down in the American Hockey League with the Providence Bruins and maybe call him back up to the big leagues once his play improves – at least that is the hope.

Another reason for the assignment could be the return of David Backes, who has missed the last five games due to an illness. Bruce Cassidy said in an interview today that Backes “should be ready to go” for Saturday’s road game against the Predators. Even though Backes was pointless in the games before his illness, his contract makes it difficult for Boston to scratch him.

Per Bruce Cassidy, David Backes “should be good” to play on Saturday night in Nashville. #NHLBruins

Donato will join the Providence Bruins, who are currently dead-last in the AHL’s Atlantic Division with a record of 3-5-1. Providence will be in need of some goal-scoring as well, as they rank 16th in the league for goals for, scoring thirty goals to date. Colby Cave leads the P-Bruins with 5-5-10 totals in eight games so far in the 2018-2019 regular season.

The Baby B’s are in preparation for a pair of games against the Charlotte Checkers on Friday, November 2nd and Saturday, November 3rd. Both games will be a good test for Donato and hopefully, the time in the AHL with the P-Bruins can help him as his young career progresses. Ryan has some things in his game that needs to be fixed, but it should not be a move of concern at this point. Boston is most likely wanting Donato to fix those mistakes before they get too large to fix.

Should the Boston Bruins have sent Ryan Donato down to Providence or should they have left him up in the NHL and fix his game there? Let me know on Twitter @tkdmaxbjj.