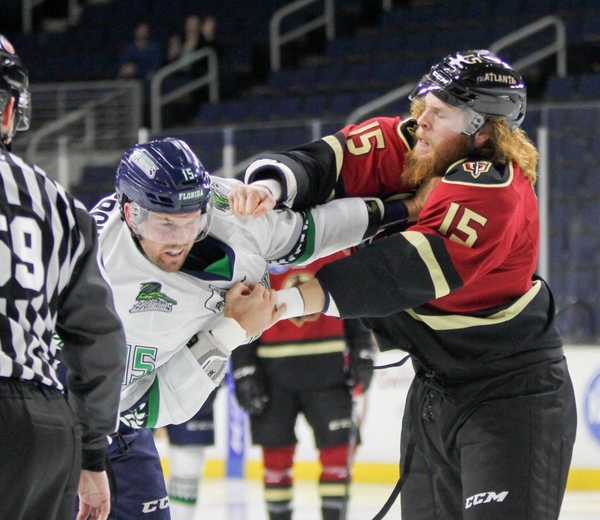 This weekend the Gladiators were joined by 10-year-old Ethan McClean, who traveled all the way from Ballymena, Northern Ireland thanks to the ‘Dreams Come True’ organization. Ethan is a passionate Belfast Giants fan who has been diagnosed with Duchenne Muscular Dystrophy, a painful and terminal disease. It was great to see Ethan enjoy his time with the team, who welcomed him into the Atlanta Gladiators family. I hope he and his loved ones have a safe trip home and wish the best of luck to the Belfast Giants.

Sometimes there is more to hockey than winning and losing 👍🏻👍🏻👍🏻👍🏻 pic.twitter.com/Yo5ZC5zEdE

On the ice, the Gladiators defensive woes continued, and after a disappointing weekend, the team finds themselves bottom of the south division with a mountain to climb if they are to get their playoff hopes back on track. Three consecutive home defeats leave the team with a 4-8-2 record after 14 games. It’s no secret that the team isn’t anywhere near their potential at this stage of the season, fortunately, there’s still plenty of time for them to steady the ship and make their way up the south division standings.

On Friday night, the Gladiators took on the Norfolk Admirals. I mentioned in the week 6 preview that this game promised goals, and it delivered. After a goalless first period, new signing Garret Ross opened the scoring just four minutes into the second. The Admirals quickly responded through Jacob Graves and at 1-1, both teams looked evenly matched. The Gladiators edged in front with goals from Nolan LaPorte and Alex Overhardt before Domenic Alberga reduced the lead to a single goal, the second period ended with the Gladiators leading 3-2. Atlanta’s lead lasted five minutes into the final period with Daniel Maggio tying the game at 3-3. The Gladiators struggled to generate any more scoring chances, and the Admirals completed the comeback with two more goals from Alberga, who finished the night with a hat-trick, 5-3 the final score.

There was no time to mourn the loss to the Admirals, with the Gladiators back in action on Saturday against the Florida Everblades, the team that dumped them out of the playoffs last year (in case you needed reminding). Despite a slow start to the season, the Everblades picked up where they left off against Atlanta, taking a 2-0 lead with Joe Cox and Nathan Perkovich both scoring. Hopes for the Gladiators to start the second period strongly were dashed when Derek Sheppard put Florida three goals ahead just 18 seconds after the puck dropped. Nolan LaPorte finally got the Glads on the board with his second goal of the weekend, one of the few positives for Atlanta. The third period was the most exciting of the game, both teams combined for five goals, Jordon Southorn, John McCarron and David Friedmann scoring for Florida, and Alex Overhardt and Justin MacDonald for the Gladiators. The game ended 6-3.

The six goals Atlanta conceded on Saturday were the most they had conceded in a single game so far this season, that was until they played the Everblades again on Sunday afternoon. Seconds after the puck dropped, Atlanta’s Tyler Howe dropped the gloves and went toe-to-toe with Florida’s Mitch Vandergunst in an effort to inspire his team. It seemed to have the desired effect. After peppering the Florida net with shots, the Gladiators took an early lead as Justin MacDonald found the net for the second time in two games. The score remained 1-0 for the remainder of the first, despite creating a number of chances, the Gladiators couldn’t add to their lead.

The first period was a success, however, the second was an absolute disaster. The Gladiators were blown away by six Florida goals, yes six. Zach Nastasiuk and Blake Winiecki put Florida ahead before Joe Cox added two of his own. A goal each from Jordon Southorn and Tommy Thompson completed the second-period demolition. Battling for pride in the final period of the weekend, Derek Nesbitt pulled one back for the Glads, but seconds later Winiecki scored another for Florida. Ben Danford found the net for Atlanta, but the misery continued, Kyle Platzer scored shortly after for the Everblades and the game finished 8-3.

The Gladiators have looked decent offensively recently. Scoring three goals in each of the last three games shows consistency, but defensively the team has a lot of work to do. Conceding 19 goals in three games is disastrous at any level, especially when playing at home. The numbers could have been worse, goalies Miroslav Svoboda and Colton Phinney combined for 110 saves last weekend. Moving forward the defense must improve. The Gladiators do get a chance to redeem themselves on Wednesday when they face the  Greenville Swamp Rabbits. Surely the only way is up from here.

Interested in going to an Atlanta Gladiators game? Take a look at the upcoming schedule and ticket availability from our advertising partners over at SeatGiant. Click the link below and please use discount code BNGP to save a little cash! Thank You!