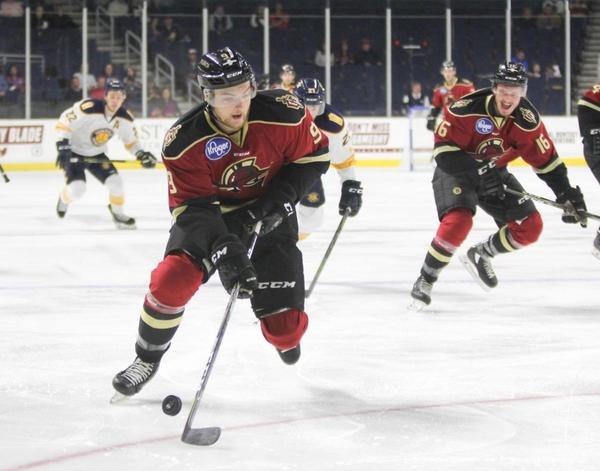 After claiming 3 points from a possible 4 last weekend, the Gladiators fought their way out of a 5 game slump and grabbed a much-needed win. The 4 game stint against the Norfolk Admirals is well underway, and as expected, is providing goals. The Gladiators were beaten 3-2 in overtime after a closely fought game on Friday, but they bounced back with a 5-1 thrashing in the rematch. Forward Brandon Troock earned his first career hat-trick, and new signing Shane Eiserman got himself on the scoresheet. Head coach Jeff Pyle also made history, equalling John Brophy as the 3rd highest all-time wins for an ECHL coach with 480. He only needs 100 more to become the most successful ECHL coach, at least in terms of wins, good luck coach.

The Gladiators roster has been boosted by the return of Miroslav Svoboda. After a strong start to the season, the Czech netminder was recalled by the Nashville Predators as coverage, and after a short spell in the NHL, returns to Atlanta. He was slotted straight into the starting role and made an incredible 75 saves in 2 games. He’s certainly one for Nashville’s future. The Gladiators also signed forward Tyler Howe, who trained with the team in the preseason. At 6-foot-6 and 229-pounds, he adds a huge physical presence to the offense, I’m certainly excited to see what he can bring to the team. Forward Justin Greenberg has been given a pro deal after an impressive start to the season with 10 points in 5 games for the Peoria Rivermen of the SPHL. Like Howe, Greenberg also spent time with the Gladiators in the preseason. On Wednesday it was confirmed that the Bruins recalled forward Joona Koppanen to Providence. Carl Persson was also recalled to the Milwaukee Admirals after a short spell in Atlanta.

This weekend sees the Gladiators travel to the Norfolk Scope to take on the Admirals again, this time on the road. The puck drops at 7pm ET on Friday night, with the weekends second game taking place at 7pm ET on Saturday. After their triumphant 5-1 victory last week, the Gladiators will be confident heading into this road trip, though they will have to be sharper defensively. They allowed almost 80 shots in last weeks games against the Admirals, who sit at the top of the southern division. The Glads have had good form in front of the net recently, scoring 12 goals in their last 4 games so will be confident of keeping up this trend. I think the powerplay is going to be important on the road. If players like Danford and Galipeau can get involved offensively, then the team is certainly capable of coming away with points. This weekend is going to be a big test for Atlanta, I’m confident they can come away with something.

This Week’s Gladiators To Watch:

Brandon Troock: After earning his first career hat-trick I couldn’t leave him off this list. With 7 points so far on the season, the former Dallas Stars prospect is the Gladiators leading point scorer. Right now he’s playing with a purpose, and his determination is paying off. The Norfolk Admirals will do well to stop him adding to his tally in the next 2 games.

Miroslav Svoboda: What else is there to say apart from 75 saves in 2 games? Despite 2 fantastic games, it wasn’t enough to make him the ECHL goalie of the week, though I feel like it’s only a matter of time before he bags that accolade. The Czech netminder will be a huge boost to this team moving forward, I hope the Predators don’t come calling for him any time soon.

Shane Eiserman: The recent signing finds his way on this list for the second week in a row. It didn’t take long for him to find his way onto the scoresheet for the Gladiators, he now has 4 points in 4 games on the season including his contributions with the Thunder. The rookie forward is in good form right now, and the more time he has to settle in with his new teammates, he’s only going to get better.

Interested in going to an Atlanta Gladiators game? Visit seatgiant.com for great deals on tickets.