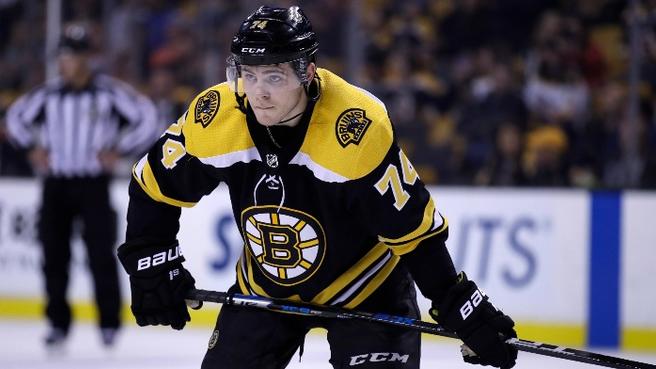 Last season the Bruins were successful in large part because of how their rookies performed. So far this year things have not gone as smoothly. Jake DeBrusk, Danton Heinen, and Anders Bjork have combined for only four goals through the Bruins first 13 games. Ryan Donato who burst onto the scene late last season was sent down to Providence after recording one goal in eleven games. This has put pressure on Bruins management to a make move. Regardless of any changes, this team makes getting their young players back on track is key to this teams success.

Of these three DeBrusk had the highest expectations coming into the season. As a rookie, he had 16 goals but shined in the playoffs. His two goals in the Game seven against Toronto propelled the Bruins to the second round. His gritty style of play made him a fan favorite as did his scoring ability. So far this season he has yet to find his scoring touch as he only has 3 goals in 13 games. He is a key piece to the Bruins second line and showed last year he could be an impactful top six forward.

While DeBrusk has struggled Heinen, has virtually been non- existent. The Bruins forward was impressive in his rookie season finishing fifth on the team in points. In 12 games this season he has only three assists and has yet to record a goal. His 14 shots on goal are far behind his total at this point last season. He is not a thirty point scorer however he does create opportunities for his teammates. So far this season Heinen has been unable to do that on a consistent basis. He made the Bruins third line a strength last season and will to do the same going forward.

Unlike his fellow teammates, Bjork has yet to see anytime in the Bruins top six this season. He has only two points in 12 games but has been more effective of late. Against Dallas Bjork appeared to have his second goal of the season before a quick whistle caused it to be overturned. Although he is known for his speed Bjork, showed grit by battling for the rebound. Each game Bjork has improved after shoulder surgery ended his season last year.

If the Bruins are to be successful this season, they will need all three to step up. They currently are third in the Eastern Conference and are coming off one of their best games this season against Dallas. It has, however, been five games since someone not on their top line has scored. The Bruins cannot be carried by their top line all year and expect to repeat last seasons success. For these three it’s only a matter of time as their slumps will not last all season.