The Week Ahead: Bruins Go West 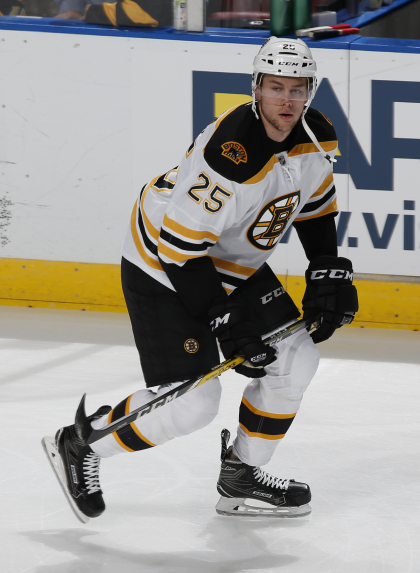 By: Mandi Mahoney | Check me out on Twitter @phonymahoney

The last week was an eventful one for the Bruins, which included three wins (DAL, TOR, and VGK), a loss (VAN), some line shuffling, a leave of absence, and the fabled two home games on consecutive days. It was a crazy home stretch on Causeway Street.

There are three games this week. Hopefully, the Bruins are able to gain some more of the momentum they built with consecutive wins against Toronto and Vegas this weekend.

Defenseman Brandon Carlo will not return to the lineup Wednesday. Kevan Miller may be back by the end of the road trip. Tuukka Rask has rejoined the team after a quick personal leave. Jakob Forsbacka Karlsson is doing well centering the third line, and David Backes appears to be a decent fourth line right wing these days. Jakub Zboril has been called up from Providence. This just might be a fun trip for the Bruins.

Brandon Carlo will miss at least Wednesday’s game in Colorado, will not travel.

Charlie McAvoy & Urho Vaakanainen won’t travel, but could join at some point on trip.

The Colorado Avalanche have a record of 8-6-3 and are sitting in fifth place in the NHL’s strong Central Division. People are saying their top line, consisting of Gabriel Landeskog, Nathan MacKinnon, and Mikko Rantanen, is the best line in hockey, but those people would be wrong. They’re close, though: the three have combined for 69 points (nice) in 17 games, their other 9 forwards have combined for a total of 53 points. They’re a little top heavy, but they’re having an easier time with secondary scoring than the Bruins have been.

The Avs’ power play is seventh in the NHL, converting at 25.4%. Their top line of Landeskog, Rantanen, and MacKinnon has combined for 17 points on the man advantage. If the Bruins can neutralize this trio and puck moving defenseman Tyson Barrie, the Avs are not going to have a good night. The same can be said for the effect the Avalanche shutting down the actual best line in hockey would have on the Bruins, though. This is a game that can go either way, though the Avalanche should probably be forced to forfeit for thinking they had the right to retire Ray Bourque’s number.

Old buddy Carl The Dread Pirate” Soderberg one times a beauty of a game-winner home to beat Edmonton Monday night The Colorado Avalanche are 3-2-1 at home this season.

On November 5th, the Bruins beat the Dallas Stars 2-1 in overtime when Brad Marchand beat old friend Anton Khudobin for the game-winner.  It was a relief as it has seemed like the Bruins have had a little trouble with Dallas since a player whose name shall not be spoken was sent to Dallas for pennies on the dollar. Quarters on the dollar, maybe? Perhaps a quarter, two dimes, and a nickel? Whatever that trade and its return added up to, it ruined a lot of people’s July 4th in 2013 – so much for celebrating America’s 237th birthday.

When you’re reading up on the Tyler Seguin grade. pic.twitter.com/w80AYsbrX2

Anyway, Dallas lost its last game, 2-1 in Columbus. Their leading scorers are (you guessed it) Tyler Seguin with 17 points, Jamie Benn with 13, Swedish puck mover John Klingberg with 13, and Alexander Radulov with 12. Radulov is leading the way in Corsi, at 56.7% CF. Their goaltending duo is not as bad as expected as Bishop and Khudobin are having a decent start to the season – not telling how long either of those guys will hold up, though.

The Stars’ power play is 12th in the league at 22.4%, and they have killed 80.7% of their penalties, good for 17th in the NHL (Bruins are 18th at 80.3%). Dallas is currently holding fourth place in the Central Division, just ahead of Colorado with 20 points. The Bruins currently are at 22 points. This is likely to be another close one, as Dallas seems to rise to the occasion whenever they play the Bruins.

The three best things about the Arizona Coyotes are, in this order: Peyote Coyote, Oliver Ekman-Larsson, and Clayton Keller. That said, they’ve had a better start than expected this season, and are holding onto fifth in the Pacific Division with 17 points. It’s a tight race out West, as the division-leading Vancouver Canucks are only five points ahead, with 22.

The best thing happening in the Arizona hockey world:

The Coyotes’ scoring leader is Boston University alum and top ten pick Clayton Keller, who has scored five goals and assisted on 7, totaling 12 points so far this season. Second on the list is their best player, Swedish defenseman Ekman-Larsson with 2-9-11 totals. In the offseason, the Coyotes traded Max Domi for Montreal pariah Alex Galchenyuk, who has managed to score 8 points in 9 games with the Coyotes.

Fashionable Finnish goalie Antti Raanta has been solid in net, with a save percentage of .929, and surprisingly enough, the Coyotes have allowed the second fewest goals in the NHL, with 39. Nashville has been the stingiest, allowing only 36. On that note, Arizona’s penalty kill is tops – they are killing a ridiculous 91.8% of their penalties. No other is within 4% of them at the moment. Their power play cannot hold a candle to the Bruins’, and they’re at 19%/18th in the NHL, while the Bruins’ have been unstoppable on the man advantage at 30%, good for third in the league.

An important question for the Bruins in this game is going to be whether their secondary scoring can contribute, as Marchand, Bergeron, and Pastrnak have been doing a ton of their damage on the power play. If the third line of Heinen, Jakob Forsbacka Karlsson, and Anders Bjork can keep coming up with the golden opportunities they’ve created for themselves during the last couple of games, the floodgates are going to open one of these days.

If you’re going to be in the Colorado, Dallas, or Arizona areas, check out SeatGiant.com and use discount code BNGP to save a little money! Click the appropriate links below to get the best seats available!