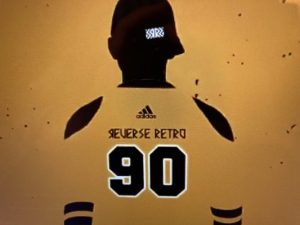 The past, the present and the future may all be colliding at once if the Bruins “go back in time” for a new/old jersey look (how’s that for some Huey Lewis and the [breaking] News)! Or, should we say, leaked news.

Great Scot, indeed! If Boston’s so-called “Reverse Retro” solid-gold sweater turns into a Solid Gold trendsetter, as Team Adidas and the NHL are certainly hoping with their recently released social media tweets, then watch out Beantown!

Harkening back to the days of Bruins’ yore (yes, years before the Days of Y’Orr) and the “Grizzled” patchiness of the steely Neely years, this potentially powerful mesh-up would mash-up the early 60’s look and the early 90’s look of the Black N’ Gold jersey — extra emphasis on GOLD, no offense to the “Pooh Bear” pandemonium years.

Call me crazy, but I’m all for it. If former B’s goalie Bernie Parent can make a version of it look good, so can current B’s super scorer David Pastrnak. And what a way to celebrate his parent club’s rookie season memory this month (November of 1965 in Boston) than by “Bernie… Bernie… Bernie!” posting about it simultaneously:

The start of my @NHL career with @NHLBruins in 1965. #Grateful pic.twitter.com/wnBgKOE5Il

Talk about a little history repeating! But that’s why it bears repeating that these jersey designs could still change / be tweaked ahead of 2021.  Nevertheless, what do fans of the Black N’ Gold think about this potential “Reverse Retro” style? Yay or Nay?

Or, perhaps on this #VeteransDay, we’ll remember another retro B’s jersey that the likes of Milt Schmidt, Woody Dumart and Bobby Bauer wore when they were carried off the ice by their opponents before heading off to serve in WWII for Canadian forces (that we can respect, even if the numerical blandness of the sweater should stay away from modernity).

In their last NHL game before heading off to serve for Canada in the Second World War, Bruins’ Milt Schmidt, Woody Dumart, and Bobby Bauer were carried off the ice by their opponents, a remarkable show of respect and camaraderie #CanadaRemembers #LestWeForget pic.twitter.com/7JxRSvvWfq

But, no matter what B’s jersey you’ll “B” rooting for this upcoming season — from alternates to thirds to now reverse retros — just keep in mind that it could always be worse for the wear, as the FHN hypothesized last month in a historical round-up of Boston’s fanatical fashions.

We’ve got ?’s about the @NHLBruins options for a potential #ReverseRetro jersey in 2021! Check out @BlackNGoldPod from our inspired @BNGProductions team today for more. #NHLBruins pic.twitter.com/tt0QNN0Nzq

Like Huey Lewis, you won’t just want a new drug, but you may need one to get behind some of those other options. “So, I guess it’s true… I’m so happy to be stuck” with this year’s reverse retro!