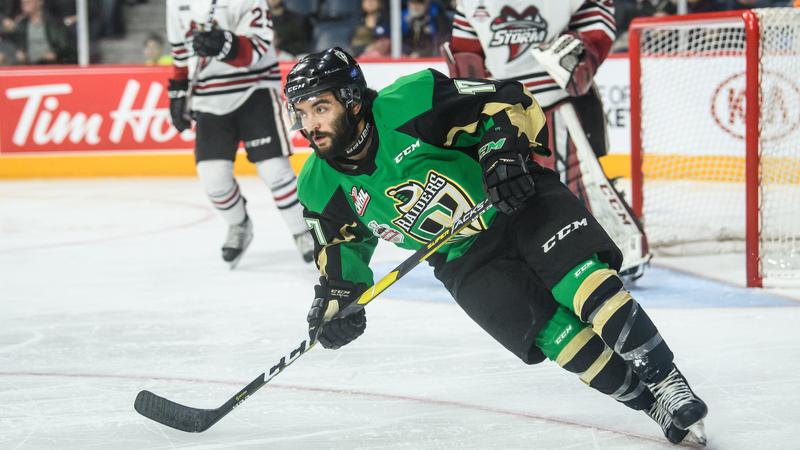 Another year, another prospect challenge for the Bruins. This year’s roster, similarly to in year’s past, features a number of players invited to the camp on an invitee basis. I’m gonna help you get to know a little more about these invitees. You can find the roster and schedule here.

Gaucher is a big, 18-year-old center that carries a 6-foot-3, 181-pound frame around with him. Last season marked his first full season in the QMJHL, a season in which he had 24 points in 68 games. This season could be a more productive one as he may see more playing time than he did as a rookie. Certainly should be an interesting player to watch at the prospects challenge. It’s hard to miss a guy that’s 6-foot-3 out on the ice.

Ever seen Dante Hannoun and Danton Heinen in the same room? I haven’t. Really makes you think…

Hannoun played an instrumental role in a very successful season for the Raiders last season that saw them win their first WHL championship in 34 years this past season. After being acquired from the Victoria Royals on January 3, Hannoun put up 31 points in 28 regular-season games, and 24 points in 23 playoff games. Big-time players make big-time plays, like, ya know, scoring in overtime to win in game seven of the WHL championship.

We have known that Alex-Olivier Voyer was going to be attending the prospects challenge since July 26. Black N’ Gold Founder, CEO, and podcast host Mark Allred, wrote a bit about Voyer on the day of the report, you can find what Mark had to say here. Mark pretty much touches on everything you need to know about Voyer in his article, with video included, so definitely check that out.

A teammate of Hannoun, Max Martin also basked in the glory of being a WHL champion. Martin tallied an impressive 41 points in 59 regular-season games this past season, and added 8 assists in 21 playoff games en route to a championship. We’ll have to wait and see if Martin can make some noise at the prospects challenge, perhaps like he did in the clip below.

Check out this crazy hit that Martin laid this past season.

I reached out to TheHockeyWriters.com writer Mark Scheig to find out a bit more about Riley McCourt and this is what he had to say, “Decent skater. Has some offense. Played on a horrible team in Flint.”

To me, McCourt sounds like a player who may be playing with something to prove and to put himself on the map a little bit perhaps after a turbulent season with the Flint Firebirds.

Despite playing on a horrible Flint Firebirds team, McCourt managed to put up 32 points in 47 games on the back end. This whole situation he played through this year makes him a player to monitor in my eyes.

Now his son, Andrew is blazing his own path, most recently with the Owen Sound Attack. Perrott was acquired from the London Knights by the Attack on January 4. In 31 games, he tallied 10 points. Perrott will be one of the younger players at camp, as he is just 18-years-old. This will be a good jumping-off point before heading into year two with the Owen Sound Attack.

In the clip below, you’ll find Perrott dropping the gloves with New York Rangers prospect Tim Gettinger. The most impressive part outside of holding his own in the fight is the height and weight difference between the two.

Formerly a Detroit Red Wings draft pick, Jordan Sambrook now finds himself in unrestricted free agency. Meaning perhaps if he does well at the prospects challenge, maybe the Bruins could sign him to an AHL deal.

Sambrook wore the “A” on his sweater for the Greyhounds this past season and had a productive year. He put up 49 points in 67 regular-season games, and seven in eleven playoff games. Sambrook carries a big frame on him at 6-foot-3, 205 pounds, which can certainly help for defensemen. Should be a player to watch with something to prove at the prospects challenge.

Taylor Gauthier has a bit of background with the Bruins, as the right-handed catching goaltender attended Bruins development camp this past July. Gauthier had solid showing at Bruins camp. Last season was a busy one for Gauthier, as he appeared in 55 games and finished the season with a 15-30-2 record, a 3.25 GAA, and a .899 goals save percentage on a struggling Prince George Cougars team.

Below you’ll find a couple nice saves that Gauthier made at the U18 Worlds for Team Canada back in April.

Rookie camp actually began today, with prospect game action beginning tomorrow. It should be a fun event with some new and familiar faces in the fold.

There’s a report out of the Quebec Major Junior Hockey League that Sherbrooke, Quebec native Alex-Olivier Voyer has been invited to participate in the 2019 Boston Bruins rookie camp. An invite like this is a great way for a young player to get looks from Bruins management if additions are needed at the minor-pro levels. This audition is also a chance to see Voyer in games action as he’ll most likely have a roster spot for the upcoming rookie camp festivities this fall. Rookie camp starts on Thursday, September 5th  at the Warrior Ice Arena and shortly after these invites and Bruins prospects will spend the rest of rookie camp at the annual Prospects Challenge Round-Robin Tournament held at the Harborcenter in Buffalo, New York starting on Friday, September 6th.

The 20-year-old right-winger played in 68 games for his hometown Sherbrooke Phoenix club having a career year in 2018-19 posting 29-29-58 numbers in his first season with the Phoenix since being traded to his birth city. The four-year QMJHL veteran was drafted by the Rimouski Oceanic in the first round of the league’s entry draft where he was selected 15th overall in the first round. Voyer played his first three seasons of his “Q” career with Rimouski posting 22-35-57 numbers in 158 games before the June 1st trade that sent him packing for home.

Olivier-Voyer is a big rugged forward that is listed at 6′-2″ 192-pounds per EliteProspects.com and in his complete QMJHL career has posted 51-64-115 numbers in 226 games. If he does well and impresses the Bruins brass, he could very well get an invite to the American Hockey League Providence Bruins training camp set to kick off as soon as the B’s National Hockey League camp is over.