The 2019-20 minor-pro hockey season was to be Boston Bruins prospect goaltender Kyle Keyser’s first year of professional hockey after a stellar Canadian Hockey League career in the OHL with the Oshawa Generals. He was signed as a free agent by Boston shortly after the … Keep Reading 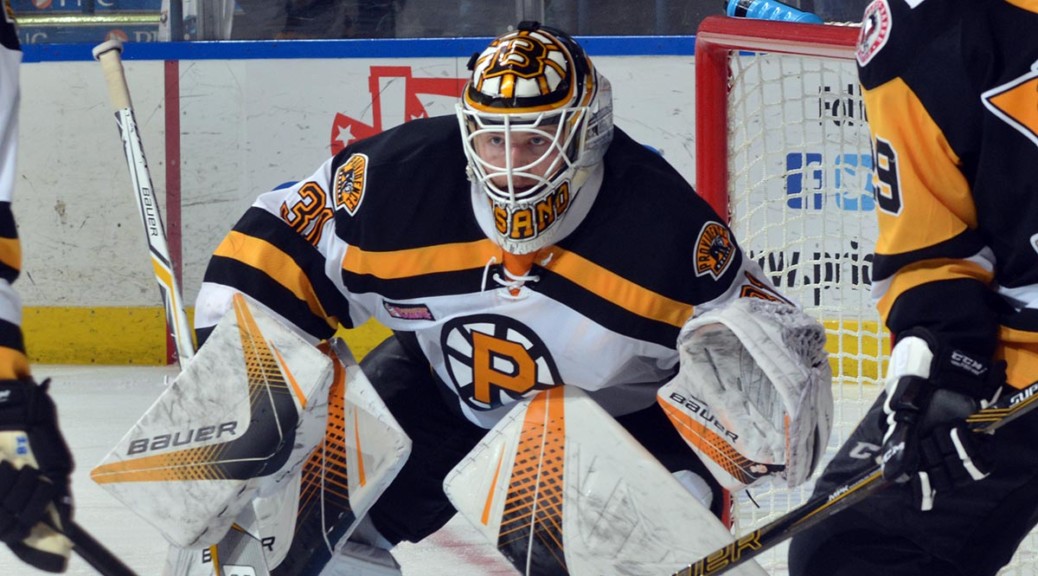 The Providence Bruins beat the Hershey Bears last night by the score of 6-2 at the Dunkin” Donuts Center in Providence, Rhode Island to improve their 2018-19 regular season record to 12-11-5-0. Speaking of record, with the victory over the Bears, Providence goaltender Zane McIntyre recorded his 68th American Hockey League win in franchise history. … Keep Reading

Re-Signing Khudobin Should Be Top Priority For Boston

In today’s NHL its been proven countless times how important it is to have a reliable number two option in goal. Looking at some of the recent Stanley Cup champions the trend is evident.

The Blackhawks in 2015 relied on Scott Darling to push them past Nashville in the first round en route to their third title in five years, the … Keep Reading

It has only been about twenty days since the Boston Bruins were eliminated in the Eastern Conference Semi-Finals to the Tampa Bay Lightning, but it already feels like forever since we saw the Bruins play an NHL game.

Since the loss to the Lightning, the Bruins have considered many decisions including who to re-sign, who to possibly trade, and who … Keep Reading

Providence Bruins: Why Is Binnington Here?

As a person constantly learning about the inner works of how a hockey franchise works no matter what level is always something I love to do as I investigate interesting topics along the way. One particular topic that’s boggled my mind for the past few week’s is the addition of goaltender … Keep Reading

Bruins: Vladar To ECHL Is A Questionable Move?

Let’s start by saying I’m a big fan of researching everything Boston Bruins hockey but never considered myself an expert or insider but a person that takes this hobby seriously while learning on a daily basis. Sometimes when things happen behind closed doors, and fans have nothing to do with certain moves, we have our … Keep Reading

Boston Bruins: You “CAN” Teach That

Opening night for the Bruins certainly did not feature the line-up that last year’s Bruins fans would have expected.  So many “casuals” hope that they will wake up at the end of summer hockey hibernation to find their team stocked with off-season superstar acquisitions.  On the opening night not only did B’s fans not find … Keep Reading

Why Do The Boston Bruins Keep Losing First Rounders?

The former first-round pick Malcolm Subban (24th overall, 2012) was placed on waivers yesterday and claimed by the Vegas Golden Knights earlier today. Vegas now has three goalies on their roster. Fleury, Pickard and Subban will make quite the tandem in nets for them. For the Bruins, they will now use Daniel Vladar and Zane McIntyre as the … Keep Reading

When the Boston Bruins selected Malcolm Subban in the first round of the 2012 Draft, tounges wagged furiously. Malcolm, the younger brother of then Canadiens defenceman P.K. Subban would have brought another dimension to the century-old rivalry between Boston and Montreal.

Times change though. P.K. Subban headed out to Nashville, and now Malcolm is heading to Las Vegas. The Golden Knights picked up the … Keep Reading