A Look At The Boston Bruins Salary Cap 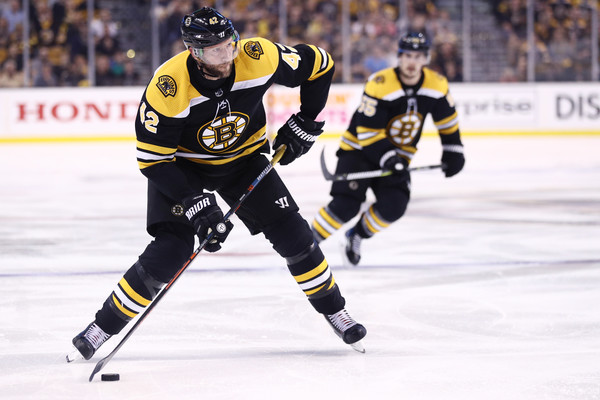 David Backes #42 of the Boston Bruins skates against the Tampa Bay Lightning during the third period of Game Four of the Eastern Conference Second Round during the 2018 NHL Stanley Cup Playoffs at TD Garden on May 4, 2018, in Boston, Massachusetts.
(May 3, 2018 – Source: Maddie Meyer/Getty Images North America)

The Boston Bruins exceeded most fans expectations last season. The youth movement helped lead the team into a second-round run in the Stanley Cup Playoffs. While their early exit was disappointing, the B’s front office now have to turn the page and look to the upcoming 2018-19 season.

Moving forward, the Bruins have a few things going for them regarding the salary cap. The Las Vegas Golden Knights slightly magical (and sort of improbable) Stanley Cup Final appearance will certainly help propel the league’s overall financial performance. This will certainly add a few dollars to the salary cap next season.

NHL Commissioner Gary Bettman claimed the salary cap would go up. He mentioned that it would at least $78 million. That figure could go up even more, perhaps as high as $82 million. If the salary cap goes that high, it would certainly help the B’s out now and down the road.

The Bruins currently have $65.3 million reserved for their current roster of players. That figure includes 10 forwards, six blueliners, and Tuukka Rask. With the projected minimal cap increase, the B’s will have $12.7 million to lock up the remainder of the squad. At the moment, it would be three forwards, one defenceman, and a backup goaltender for Rask.

The B’s are very likely going to keep Anton Khudobin on the roster. He was the better goaltender early in the season and was a dependable player for the Black and Gold last year. The B’s will likely sign him in the high-six, low-seven figures (Best guess would put the figure at a cool million).

The Bruins will still have a lot of space available for their restricted free agents. Forward Sean Kuraly and middles Matt Grzelcyk will be retained for relatively low costs.  A realistic guess would have the B’s picked up both players for roughly three million. Those three purchases would lock up the team at the defencemen and goaltender positions and still give the B’s 8.7 million to sign the forwards.

The Bruins have a few less-than-ideal contracts on the books right now. The B’s are paying six million a year for David Backes. At 33, he’s one of the more expensive middle-six forwards in the NHL. There have been a lot of complaints on David Krejci’s seven-plus million as well.

The complaints about Tuukka Rask could fill a dozen articles. No matter what Rask does, there will always be arguments about him not being a Stanley Cup goaltender.

Unless something radically changes during the offseason, the Bruins organization are going to keep all three players. (Personally, I’d like to keep all three as well. My inner backseat GM would try to move Backes solely on the six million for a middle-six player.)

So, who are going to be the three players that the B’s should sign for next season? Riley Nash’s strong regular season performance should put him at the top of the list. The Bruins should be able to secure him for a high-two, low-three million dollar deal.

That gives the team roughly between $5.6 and $6 million left to play with.  The Bruins front office now have a more difficult choice to make among the remaining players. Do they retain veterans like Rick Nash, or do they fully embrace the youth movement?

Bruce Cassidy seems to be leaning towards doubling down on the youth movement. At the end of the year press conference, the Bruins bench boss expressed his excitement over the large pool of young talent that could earn themselves a position come October.

“So we have players that had positive years in Providence,” said Cassidy.  “Austin Czarnik had a really good year. He could come in and take somebody’s job. He’s a pending group six. Again, I can go through the whole list of players I’m sure you’re referencing, whether it’s Jakub Zboril, whether it’s [Zach] Senyshyn, whether it’s [Trent] Frederic coming out of school, we’re cognizant of every one of them and sort of where their potential trajectory is. Our exit meetings with [Jakob] Forsbacka-Karlsson, as an example, who had a tough injury and missed a stretch down there, they’ve all made good progress, but when the rubber hits the road in training camp, you’ve got to take someone’s job.

If we are to take anything out of this, it seems that Rick Nash will not be re-signed by Boston. Tommy Wingels and Brion Gionta will also likely be thanked for their service and not re-signed. Tim Schaller seems the only one of the team’s current UFA forwards that will be retained, and his contract will likely be around Anton Khudobin’s price range.

The Bruins will likely comb through the talent pool of Providence and see if any of the young forwards are ready to make the big move to the NHL. Several of them have already shown flashes of brilliance, and that may make the choice easy for the organization come training camp in September.

While there are storm clouds on the horizon for the Bruins, those hard choices are two seasons away. At the moment, the B’s salary cap position looks relatively secure for the 2018-19 season.