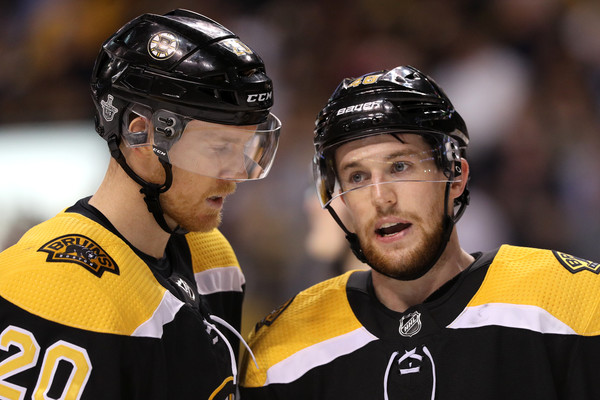 Riley Nash #20 of the Boston Bruins talks with Matt Grzelcyk #48 during the second period of Game Three of the Eastern Conference Second Round during the 2018 NHL Stanley Cup Playoffs at TD Garden on May 2, 2018 in Boston, Massachusetts.
(May 1, 2018 – Source: Maddie Meyer/Getty Images North America)

The Boston Bruins are proving to be their own worst enemy right now. The Black and Gold had a sold-out crowd backing them on Wednesday night at the TD Garden. The B’s looked poised to push the Tampa Bay Lightning into Boston Harbor with a resounding win.

Then the B’s started making simple mistakes. The Bolts easily capitalized on those simple errors, allowing Tampa forward Ondrej Palat to score twice within the first 3:19 of the game.

“[The] puck kind of felt like it back-spin on me on the ice,” said Matt Grzelcyk about his early error that led to the Bolt’s first goal of the night. “[I] thought maybe it went behind me, so [I] just took my eye off the puck, I guess. And they capitalized because they’re a good team. Obviously not the way you want to start a game. It was tough bouncing back after that.”

Unfortunately for the Black and Gold, those two goals were all Tampa needed to beat Boston. The B’s ended up falling to the Lightning 4-1.  The B’s get another chance of redemption against Tampa Bay on Friday.

“We made a few mistakes early that unfortunately, we couldn’t crawl our way back from,” shared Bruins forward Brad Marchand with the media postgame. “But we had some pushes during the game where their goalie made some big saves. That’s how it goes sometimes.”

Can we blame some of this on shoddy officiating? Some, but not much. The Bruins certainly got no favors from the refs in that game. (If you take a look around the league, the refs have been maddeningly inconsistent across the board in the second round of the postseason.)

Thankfully, the B’s penalty kill did its job most of the night in Game 3.

Did the refs take away the momentum from the Bruins at times? Sure, but when the B’s seemed to have control of the ice, they were unable to find a way around Andrei Vasilevskiy.

Do the Bruins need to go back to the drawing board? Certainly not. The B’s are an elite team that earned their place in the playoffs. They’re just going to have to make a few tweaks and focus a little more on their puck management.

The B’s top-six forwards will remain the same. They’ve been doing most of the heavy lifting so far this series. While there are certainly no passengers on the team right now, there are players (especially among the bottom-six forwards) who need to hunker down and give everything they’ve got left to win this series.

While changes are going to be made among the forwards (and quite possibly a shuffling of the defensive pairs), Bruins head coach Bruce Cassidy is keeping any new configurations under his hat for the time being.

“I’m not going to tell you who’s going in or who’s going out now because we’ve got to get the healthy guys sorted out first and then go from there,” offered Cassidy. “Tuukka [Rask] will start, I’ll give you that.”

The Bruins seem ready for Game 4, and they’ll stand by whatever decisions Cassidy wants to make.

“He’s gonna make his decisions as a coach,” said B’s alternate captain David Backes. “We’re the players, if we’re in the lineup we’ve got to give everything we’ve got every time our name is called to get on the ice. If it’s not called, we need to be supportive of our teammates. The character in this room is something I’ve never been concerned about. We have guys that when they’re out there are working their butts off to try and stay ready if their name is called.”