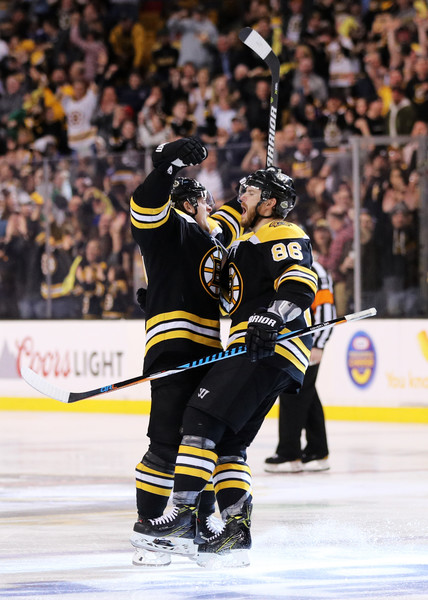 Torey Krug #47 of the Boston Bruins celebrates with Kevan Miller #86 after scoring a goal against the Toronto Maple Leafs during the third period of Game Seven of the Eastern Conference First Round in the 2018 Stanley Cup play-offs at TD Garden on April 25, 2018 in Boston, Massachusetts. The Bruins defeat the Maple Leafs 7-4.
(April 24, 2018 – Source: Maddie Meyer/Getty Images North America)

As fans of the Boston Bruins, we’re all disappointed at the end of the B’s 2017-18 season. This year’s squad had the potential of making it to the Stanley Cup Final. The Tampa Bay Lightning ended those dreams by taking out the Black and Gold in five games.

They’ll be no dirty water in the Stanley Cup this year. So what happens when the team doesn’t go all the way. As usual, the fans and the media resort to the annual round of recriminations against the players and the front office.

A fair amount of that rage has been put on two players. Torey Krug and Brad Marchand. The most recent grumblings around Causeway Street are to have one or both of these players moved in the offseason. While Marchand’s licking antics were certainly a distraction, he was one of the best players for the B’s in the regular season and the playoffs.

Marchand’s not going anywhere. Like Patrice Bergeron, he’s going to be in the Black and Gold until he retires.

But persistent rumors continue to swirl around Torey Krug. Could the Bruins organization be considering moving him in order to find the missing piece for next season? The B’s have several left-shooting d-men coming up through the ranks, and on some level, it might actually make sense?

But would the Bruins do it?

Krug is the kind of player who will kill himself in order to make the play. He broke his ankle in Game 4 against the Tampa Bay Lightning and will be wearing a boot for the next two months. (Thankfully, the injury won’t require surgery.)

“To be honest, I was hoping I just had a sprained ankle or something and I’d be able to go off for a shift and come back out there, but it was pretty obvious that that wasn’t going to be the case,” said Krug about his broken ankle. “You just try to get up and get off the ice. My dad always told me, ‘Don’t lay on the ice and let people pick you up.’ So [I] just kept going.”

Krug should be fully healed in time for training camp in September.

The biggest reason the Bruins organization won’t move him is simple: Krug is too bloody valuable to Boston. Krug led all defencemen with 59 points this season. His 14 goals was also a personal best for the 26-year old Michigan native. Krug also led B’s defencemen in scoring during the postseason, notching up 12 points for the Black and Gold. (By comparison, Bruins wunderkind Charlie McAvoy only put up five.)

Krug is one of the more reliable blueliners the B’s have right now. That he is one of the better puck-moving d-men out there certainly increases his value. He’s dependable, reliable, and gives people six inches taller than him a serious run for their money.

The Bruins organization might move Krug, but the offer would have to been one of those Tuukka Rask for magic beans trades that Boston always finds a way to get the Toronto Maple Leafs to agree to.

Krug’s potential has yet to be fully realized. Krug has the ability to be a 60 or even 70 point player for Boston. That’s something Cam Neely and Don Sweeney won’t walk away from.

So, the next time some media outlet mentions a ‘hot take’ on moving Krug, you can toss that opinion into Boston Harbor.