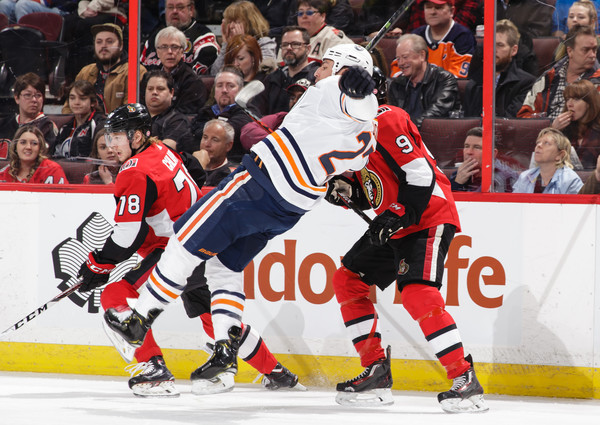 Milan Lucic #27 of the Edmonton Oilers falls to the ice after contact with Bobby Ryan #9 of the Ottawa Senators as teammate Filip Chlapik #78 looks on in the first period at Canadian Tire Centre on March 22, 2018 in Ottawa, Ontario, Canada.
(March 21, 2018 – Source: Jana Chytilova/Freestyle Photo/Getty Images North America)

Former Boston Bruins forward Milan Lucic is looking to leave Edmonton. Depending on the sources cited, Lucic wants another shot at the Cup and/or wants out of Canada. Former Bruins general manager Peter Chiarelli has begun to shop around Lucic and his contract.

Who doesn’t remember that hit? When Jack Edwards said that hit would be on hockey highlight reels for a decade, he was right. That hit has ingrained itself into hockey history and it will certainly be a part of Lucic’s career highlight reel when he retires from the NHL.

Once again, the Boston media began sniffing around about bringing Lucic back to the TD Garden. So, should the Black and Gold welcome Milan Lucic back to Boston?

The Boston Bruins should look on that hit and Milan Lucic’s time in Boston with nostalgia. Then the Black and Gold should move on to better options in free agency.

Sure, there is interest in Lucic. He’s still a big body that can deliver punishing hits and could be a solid middle-six forward for the Black and Gold. But the Bruins already have that in David Backes (and there are rumors that the B’s are trying to get him out of Boston).

Well, it’s a complicated one obviously given the length of the contract,” offered NHL Insider Darren Dreger. “The worry, I suppose, from some that Milan Lucic can’t deliver in the capacity that he has historically. He’s not coming off a very solid year, but there’s interest in this player. I’ve spent enough time on this file over the last several days, I would say, to at least acknowledge that there’s interest in Milan Lucic.

“The problem though is, to your point, what’s the construction of a trade and what has to go out with Milan Lucic just to bait a team to take on that contract. I still believe he’s got game. He’s 30 years old, but you’ve got to be certain of that as an interested general manager because there is a pile of money – and it’s not just about the cap space. We know he’s a $6 million cap hit. We know that from a salary standpoint, Edmonton paid what – $8 million this past season, $7 million owing Lucic next year and then it drops to 6, then 4, then back up to 5, and then 4 in the final year of the deal – 2022-23.

Milan Lucic has begun to slow down. That’s bad enough in a league where the players keep getting faster every season.  He always seems to be two or three steps behind players like Connor McDavid, and he’d have trouble keeping up with the B’s speedier players.

His numbers have also fallen off. Lucic put up just 34 points (10 goals) for the Blue and Orange last season. He’s also had a very rough go of it since last Christmas. The B’s just can’t afford to that kind of money into a player that is having a Jimmy Hayes kind of season.

Once again, the Boston Bruins are hemmed in by cap space. The B’s have $7.4 million left and several forwards still unsigned. At this point, Reilly Nash is a better buy for Boston than Lucic. Nash’s contract will eventually end up at around $3 million, half the price of Lucic’s contract.

That six million dollar contract will be a tough sell for some organizations, and it will certainly make Don Sweeney think twice before agreeing to any kind of deal that brought Lucic back to Boston.

While free agency frenzy will surely grab a hold of the Bruins, there are better choices to be made with the money they have available.