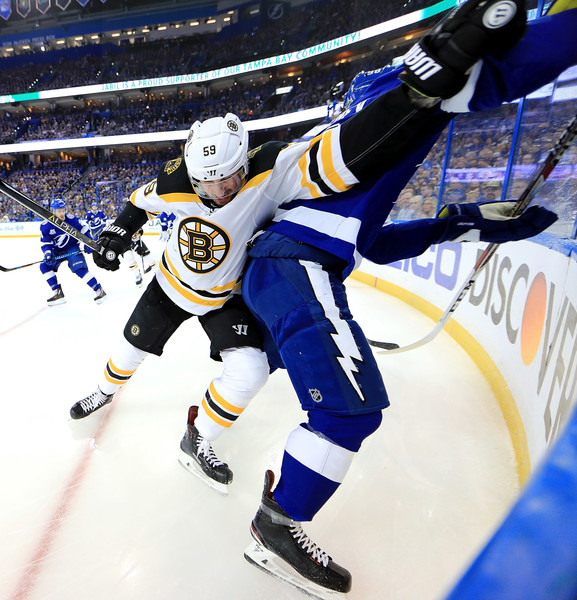 Tim Schaller #59 of the Boston Bruins and Mikhail Sergachev #98 of the Tampa Bay Lightning fight for the puck during Game Five of the Eastern Conference Second Round during the 2018 NHL Stanley Cup Playoffs at Amalie Arena on May 6, 2018, in Tampa, Florida.
(May 5, 2018 – Source: Mike Ehrmann/Getty Images North America)

The Boston Bruins have had a thing about local players these last few years. Unfortunately for the B’s, that hasn’t really worked out for them. The Bruins kept looking for that local, gritty winger but ended up getting disappointed in players like Jimmy Hayes and Frank Vatrano.

The Bruins did seem to have better luck with New Hampshire native Tim Schaller though. Schaller has become a reliable fourth line player for the Black and Gold and put up some career-best numbers last season. The 27-year old Schaller put up 22 points (12 goals) for the B’s and lead the team in short-handed goals (three).

Schaller does bring a lot of positives to the bottom-six in Boston. There is also room for some improvement in his game as well. The fourth line seemed underwhelming in its series against the Tampa Bay Lightning.  Schaller also had hand surgery in the off-season and his chances of being ready for training camp aren’t exactly 100 percent.

So, what are the odds of Schaller staying in the Black and Gold next season? At the moment, it looks like it’s a 50-50 split on him staying in Boston. While Schaller would make a good fit on the fourth line, he’s been realistic about his chances of coming back next season in the spoked ‘B’.

“I would love to stay. Being from just an hour up the road, obviously it’s a dream come true to play here, but at the end of the day, it’s a business, and whatever they want to do, it’s up to them. We’ll find out in a month or so,” said Schaller to the media on the B’s last day at the TD Garden last season. “At the end of the day, I’ve got to look out for myself. I think, playing here a long time is obviously a dream. I don’t know if it’s realistic or not. Like I said, we’ll find out, but if an opportunity arises somewhere else, then, like I said, we’ll go from there.

There are several major factors that are playing against Schaller right now.

First, the fourth line is the easiest line to replace for most NHL teams. Unless you’re Shawn Thornton, it’s a tough job staying on the fourth line. The Bruins are committing themselves to a youth movement right now. There are several young guns in Providence who could find themselves taking Schaller’s job away from him.

There is also the matter of the Bruins cap space. The B’s may not have enough room to keep everyone going into next season. Last year, Schaller’s services earned him a modest $775,000. He’s due for a raise, and the B’s may not have all the cash they need to pull the trigger on even a moderate bump up.

Schaller will certainly explore free agency to see what other teams are offering. While he’s no Patrice Bergeron, he’s certainly a marketable NHL player who played in all 82 games last season. He’s been a reliable bottom-six forward who put up twenty-plus points while being on the fourth line. His skill set could easily earn him a two or three-year deal in the high-one, low-two million dollar range.

While it would be a shame to lose Schaller, there are players out there that could fill in that role. We’ll see what the B’s have in mind when free agency starts on July 1.