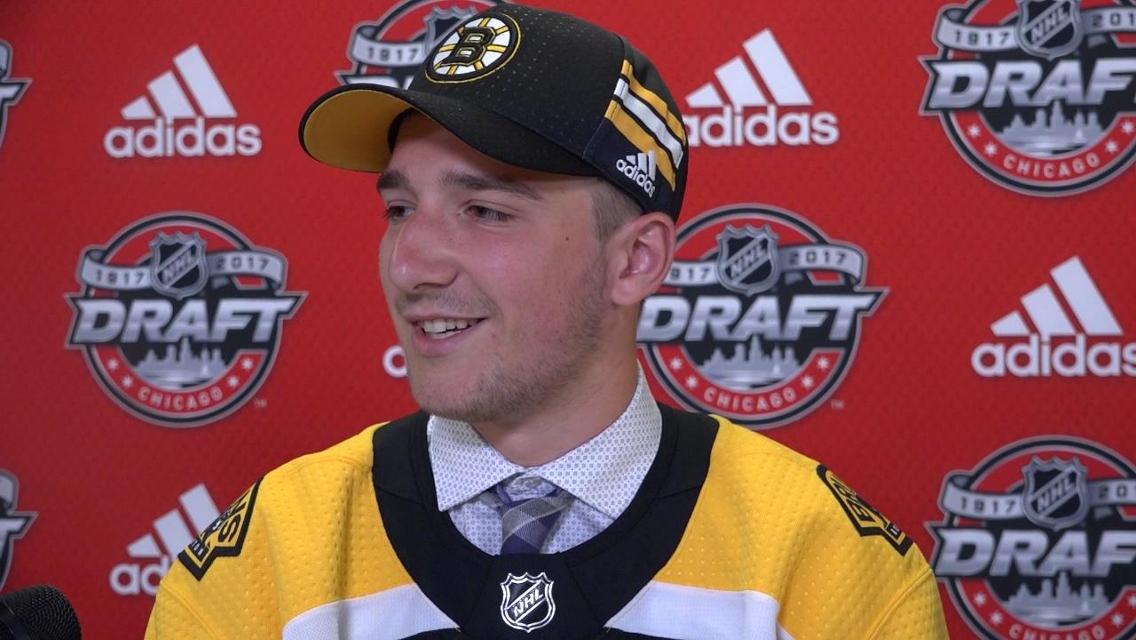 Earlier this week Sportsnet’s Jeff Marek and host of the 31 Thoughts: The Podcast with famed hockey insider Elliotte Friedman mentioned in a tweet below that Boston Bruins 2017 sixth-round selection Cedric Pare was traded from the Saint John Sea Dogs to the Rimouski Oceanic in an offseason QMJHL deal.

The 6′-2″ 201-pound Quebec Canada native finished his 2017-18 season with 37 points in 60 games played with a Sea Dogs team that came in last place in the league, missing the playoffs after winning the QMJHL Championship and appearing in the famed four-team Memorial Cup Tournament a year earlier. The Sea Dogs selected Pare in the first-round of the QMJHL Entry Draft with the 10th pick and in 129 career games with the team he contributed 18-36-54 numbers.

With the 173rd pick in Round 6 of the #NHLDraft, #NHLBruins select Cedric Pare. pic.twitter.com/HAE46ifVTG

Since the Bruins selected Pare in the later rounds of last summers draft festivities from Chicago, Illinois, I’ve had the pleasure of watching about half of his games in the “Q” during the 2017-18 campaign via web stream to get the old “eye-test”. I thought Cedric played well under the circumstances and really thrived in his development with two full seasons of Canadian Junior hockey under his belt.  He may not post a ton of points offensively, but he is a strong depth asset when it comes to his role in the faceoff circle. I like his speed and vision in the 200-foot game and has the ability to play a “Marc Savard” like role on the half-wall on the power play as I’ve seen while getting the trust and top-six minutes from first-year Sea Dogs Head Coach Josh Dixon.

I reached out to my friend and TV Colour Analyst for Rogers Sports  Craig Eagles for his insight on a professional level as he covered many games that Pare participated in and had the pleasure of getting one-on-one interviews from the young Bruins prospect who’s about to attend his second straight Development Camp at the Warrior Ice Arena in Brighton, Massachusetts. I truly appreciate Craig’s effort and the time he gave to educate my readers and those interested in what type of player Cedric is below and hope you enjoy his insight.

Pare is coming off a break out season with the rebuilding Saint John Sea Dogs of the QMJHL. The nineteen-year-old center amassed 37 points (13 goals 24 assists) in 60 games.

After the Sea Dogs traded 2018 NHL Draft Prospect Joe Veleno to the Drummondville Voltigeurs in December, Pare assumed the teams top center duties and excelled in that role-playing in every situation for rookie Head Coach Josh Dixon’s squad. “As a number one center in this league has made him an integral part of our team, a sought after player in the league and pro prospect who is trending in the right direction,” said Dixon of Pare’s performance this season. Pare continues to take pride in the full 200ft game. Pare believes his game has trended upward ever since attending Bruins Development last August, but still fully understands the developmental process and the extra work required to make the jump to the next level. “This summer, I’ll be focusing on strength and quickness in my off-ice training, while my focus on ice will be around my speed, explosiveness improving my shot and my puck handling skills,” explained Pare.

Pare’s overall progression this season was evident; the two-way center was quicker to loose pucks, won the vast majority of puck battles, and looked more poised and polished in the offensive and defensive zone. His decision-making, grit, compete level and defense first mentality will definitely translate well to the pro game.

Cedric Pare’s work ethic and unwavering commitment to the developmental process is truly remarkable. Pare will fit in very well on a young highly talented Rimouski Oceanic team that will be in the upper echelon of the QMJHL next season. Pare will probably slide into 2nd line center role behind highly touted 2020 NHL Draft Prospect Alexis LaFreniere.