A Brief History Of Providence, Hockey, And The Bruins 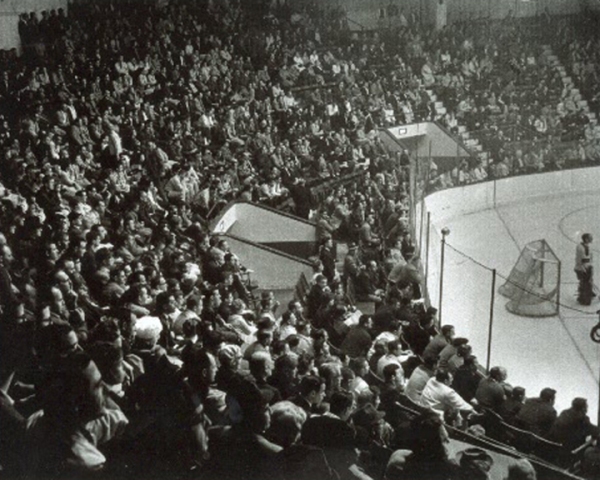 Providence has had a long and storied history with ice hockey. One which dates to December 1926 when the Rhode Island Reds played the Springfield Indians in the now-defunct Canadian-American Hockey League (C-AHL).  While the Reds lost heartily that day, the fervor for the game that was never to be quenched.  At the time the Reds were known more for their pugilistic acumen than their talents with the puck, but as the years flew by they gained their footing and truly made a name for themselves winning the Fontaine Cup in 1930, ‘32 and ’34, coming in second in 1931 to their very first foes, the Springfield Indians.

The Reds barely noticed the changed in leagues.  Refusing to fall far behind and capturing their first and second AHL titles back to back in 1939 and 1940. World War II was hard on everyone, but the team and the community struggled through these times together coming out the other side stronger and wiser for their efforts.  The war had changed everyone, values were slightly altered, and emphasis was placed more on the moment.  Capturing the Calder Cup was in the cards only 2 more times for the ultimately ill-fated team; 1949 and 1956 saw the last two years the Reds were to celebrate their ultimate victories. However, as many looked back, they remembered that while winning was an incredible experience the journey along the way, the ups, the downs, the comradery and the friendships.  That is what made ice hockey mean so much to Rhode Island and Providence.  Therefore, when the affiliation with the Rangers ended in 1975 and in 1977, after 51 years, the Reds said goodbye to hockey, everyone knew it would not be gone for long.

Not long can be a very relative term, I get it, Trust me. My father is a paleontologist/geologist and as he would remind me, <using best dad voice> “Jennifer, not long, geologically speaking, could be billions of years.”  Whereas, to my teenage daughter, a web-page taking ten seconds to load is <teenage whining> “forever.”  So, let us settle somewhere at a more reasonable in between.  Our beloved Providence Bruins, the official AHL affiliate of the Boston Bruins, brought hockey back to Providence proper in 1992.  But the Road to Providence started, almost fortuitously, in 1977 in a little town you may have heard of, Portland Maine.

Image Courtesy of the Portland Library

Portland Maine was abuzz with the news that a new hockey team was to follow the construction of Cumberland County Civic Center.  Multiple teams bid to be “that” team, but the Philadelphia Flyers were the only one of the bunch willing to commit their top-level farm team to the great white north of Maine.  Voila, the Maine Mariners were born. The Mariners opened their inaugural season on October 15, 1977, in front of a crowd of over 6,000 and carried that momentum throughout the season being the first team in the AHL to ever win the Calder Cup on their first go. As affiliations go, in 1983 Philly decided to change direction and sold the rights of the Mariners to the New Jersey Devils.  The Devils loved the ready-made franchise idea but wanted them a little closer to home so, in 1987 New Jersey up and moved the team to Utica New York re-branding them the Utica Devils. This franchise was eventually purchased by the Calgary Flames organization and has undergone many iterations, including a few seasons of dormancy, but currently live on as the Stockton Heat, their AHL affiliate.

Portland, Maine refused to be left out of the hockey mix and here is where it really gets good.  The AHL approved an expansion team to be supplied from the Boston Bruins, to be located in Portland Maine, and to be named… wait for it… the Maine Mariners.

Okay got it, I am totally on board.  Good deal, carry on smartly.

Thank you brain, I shall.

This, my friends, is where our Providence Bruins began, with the second incarnation of the Maine Mariners.  A roster filled with Boston Bruins players, a new black, white and gold color scheme and the Mariners were ready to take to the ice that fall finishing first in their division.  After five seasons in Portland, a deal was struck to relocate the franchise and rename it the Providence Bruins.

Don the Spoked P, lower the lights and queue the organ, your Providence Bruins hit the ice for the first time in 1992 ending the 15-year drought.  In the 25 seasons since taking root, the team has three regular Season Titles, five Division Championships, one Conference Championship and one Calder Cup. Their per game attendance average has hovered a little over 8000 since climbing from a low of 6000 in 2007.  With the continued support of the fans and the community, this team will continue to make future history for both Providence and the Boston Bruins! 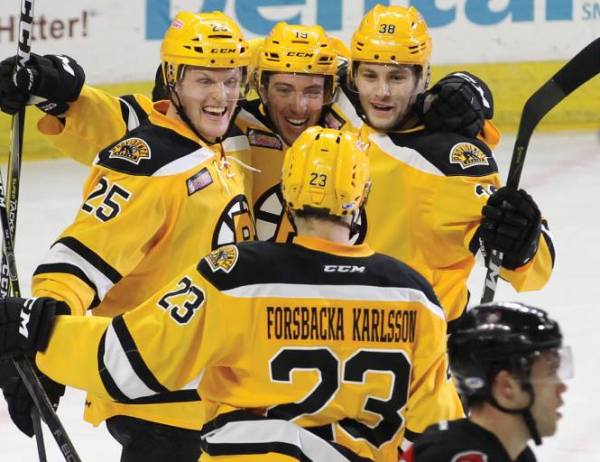 Thank you to the following sites for providing information and insights helpful in creating this article.