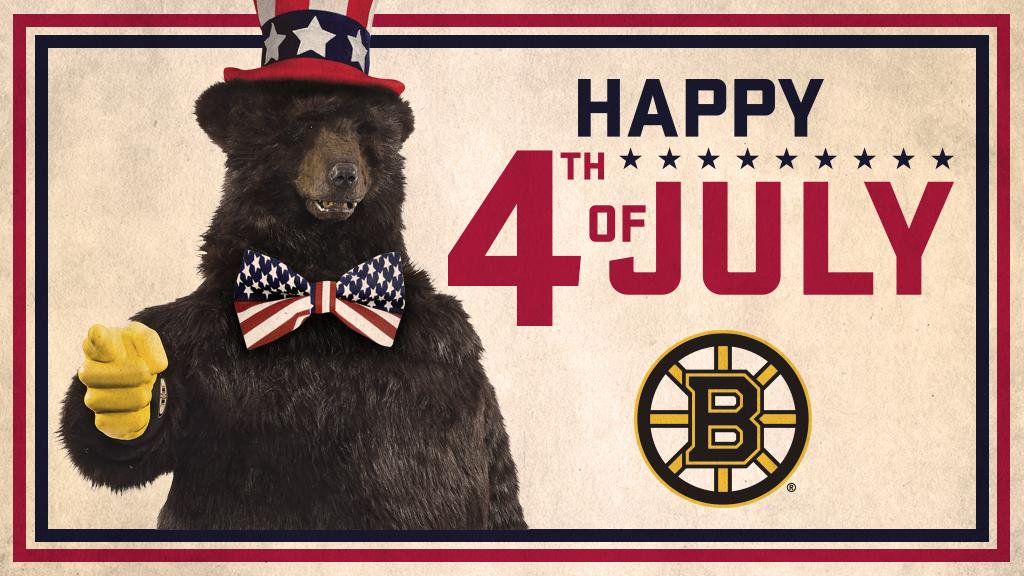 First and foremost, I fancy you’ll have a fun, fireworks-filled, festive Fourth with family and friends! Furthermore, I’m faithful the Bruins will soon have a fan-followed, fast-functioning 4th line of fresh faces all with fundamental hockey facets! And with those hectic few days of “free agent frenzy” now finally finished, it looks like the aforementioned figures will indeed be finely featured for 2018-2019.

Alliteration aside, here’s why speculating about the Bruins 4th line this year will be fun: the guys that could replace the likes of NASH & SCHALLER are named NORDSTROM & WAGNER.  Sure, their on-ice talents might not equal that of the recently departed, but those are certainly strong surnames. George Carlin would be proud & impressed (especially if pronounced with a Boston accent). When was the last time you messed with a WAGS or NORDS? That’s right, didn’t think so.

And that brings me to my next (Marty La)point(e). Man, have the B’s had some historically awesome surnames and nicknames for their “fourth liners” or “grinders” or “energy guys,” however, you’d like to describe them.  And I’m not talking about the famous MERLOT line that just like the vintage vino, lingered long after it hit you. Or the more recent Cardiac Kids / Mid-Life Crisis line that fellow writer Jacob Albrecht aka @bruinsfan3725 referenced when we were reminiscing. I’m referring to the other solid Stanley Cup-winning or runner-up seasons for the Bruins, going all the way back to their first championship during the inaugural month of the Hoover administration (now there’s a sucky surname). To wit:

1929: Who’d want to tussle with the likes of MICKEY MaCKAY (could’ve also been a mobster), RED GREEN (two colors for your moniker–I’m turning yellow just thinking about it), or CY DENNENY (you can’t even say it without sounding like you’ve been clocked)?  Sure, there wasn’t technically a “4th line” back in these days–or the many years that followed–but when these guys jumped the boards, you felt it. And so did the opposing team.

Let’s fast forward a decade and now deal with a perfectly-fitting–and timely–hockey nickname. Well, at least until a certain Jean-Claude Van Damme movie came out and literally iced that notion.

1939 (and also parts of 1941): Mel “SUDDEN DEATH” Hill! Yup, there was a B’s hockey player known as Sudden Death because of his you’ve-got-to-be-kidding-me-that-guy-scored heroics in the playoffs that year (3 OT winners… in one series!!!).  Not even the above production’s epic all-star goalie Brad “Get Back in the Crease!” Tolliver could’ve stopped this version of “Sudden Death.”**

(**At one point in the near future, there will be a blog post solely focused on the ridiculousness of this movie and how they actually used real players, teams, jerseys, broadcasters, ESPN graphics, music themes, etc. all in an effort to get fans back into hockey post two very recent lockouts. Or so the scuttlebutt goes.)

Now let’s look at some names on two Boston teams that almost won the Cup in ’88 and ’90, respectively.  Sorry to skip the famous Bobby Orr years but I’m positive Mssrs. Marcotte, Sanderson & Carleton will forgive me.

1988 (and also parts of 1990): If you walked into a Bruins bar during the waning days of the Reagan administration and heard people talking about LYNDON “LB” BYERS or MOE LeMAY, you already knew what the conversation was about.  In fact, you probably had a good chance of making a few bucks off a tipsy patron if you asked: “Who do ya got tonight in the BYERS vs. LeMAY fight?” These gritty grinders personified pugilism but also puck-sense, nearly helping the B’s fight off the Oil.  Sadly, just like in a prize fight, Edmonton literally and figuratively knocked the lights out of the Bruins in four games (well, 4.5 games technically).

And that brings us back to today, since we’ve already opened up about the MERLOT line of the 2011 and 2013 seasons, and tipped our cap to last year’s talented troupe. So, who will join the ranks of Bruins fourth line lore as we gear up for what will undoubtedly be a very challenging and competitive 2018-2019 campaign? Will the defensive punch of ACCIARI pair well with the gritty goal-scoring of KURALY again? Will WAGS & NORDS play a pivotal role off the bench? Will some of the young guns get fired up and challenge for a spot or two? Your guess is as good as mine, right now.

But no matter the player, the name or the nickname, anyone playing on the 4th line / the energy line / the grinding line this season, should hearken back to the days of yore, Orr and yesteryear and learn from the most successful of their predecessors.  Because the name of the game in today’s NHL is all about speed, skill, fight & finish — and the best 4th lines have them all.

I’m confident the Black N Gold will remember this fact as we celebrate the Red, White & Blue this Summer. Happy Fourth (Line) of July, Bruins Nation!