Prospects Challenge: Part 2 — A Tale Of Three Goalies For The Bruins 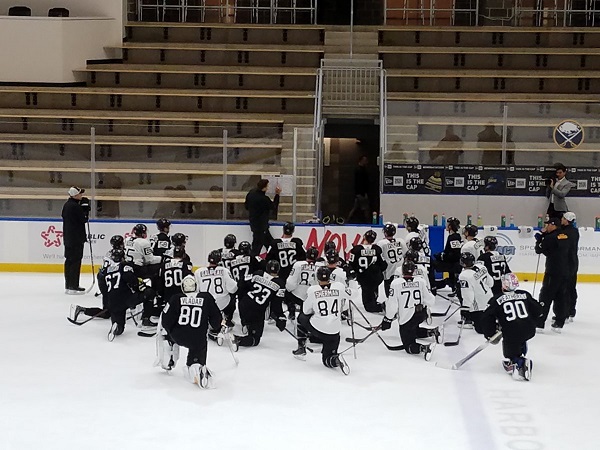 Dan Vladar, Kyle Keyser, and Dawson Weatherill were three netminders who played their way to Buffalo representing the Bruins in net over the four-day extended weekend event. Three men to tend the pipes gave Boston Brass the opportunity to scrutinize the skills and tenacity each of these players brought to the game.  As well as giving each of them their opportunity to shine as the squads starting goalie.

Game 1 against the Pittsburgh Penguins, was to be Kyle Keyser’s night in the spotlight. The 6-foot-2, 180-pound goalie has played for the Oshawa Generals since 2016 and at the young age of 19 was looking to convince the people upstairs that their faith in his growth and development were not misguided. Attending the development camp in the spring, there were a few doubts about his ability to keep the pace and continue to build his repertoire.  Kyle took Game 1 by the horns and left little doubt that he was here to work hard and win. 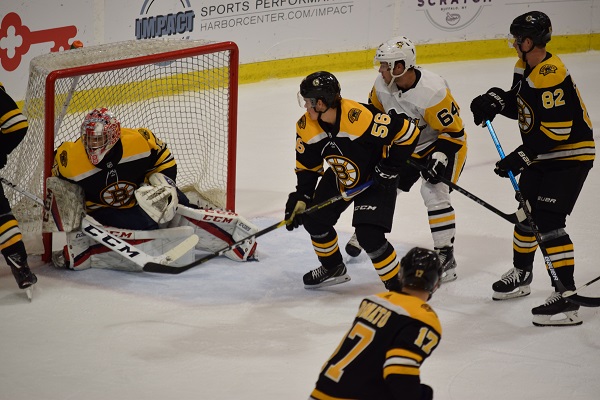 Through the first two periods, Keyser was on fire, not letting one of the many shots he faced past his post. His determination in net saw the B’s entering the third with a 4-0 lead. This iron curtain did falter a bit in the third as he allowed two pucks to find their way into the net, but his composure was not to let him down.

Nice deflection by Keyser of the butt end of his stick, showing a bit of athleticism with a hop to be sure it cleared the net. #ProspectsChallenge #NHLBruins

Finishing his night off with a total of 35 saves, it was reasonable to think that perhaps fatigue is what caused the two pucks to slip by in the third, so the next day I asked Kyle his take on the situation. “Honestly, I didn’t feel fatigued at all in the third, sometimes when you are as a team 4-0 and you are going into the third, you maybe take your foot off the gas a little, even me, and I think that is just an area to focus in on to improve for everybody.”  Backing up his confident statement regarding his endurance Keyser did show a good bit of athleticism late into the third, using the butt of his stick while making a nice leap to ensure the puck would not find its intended target. 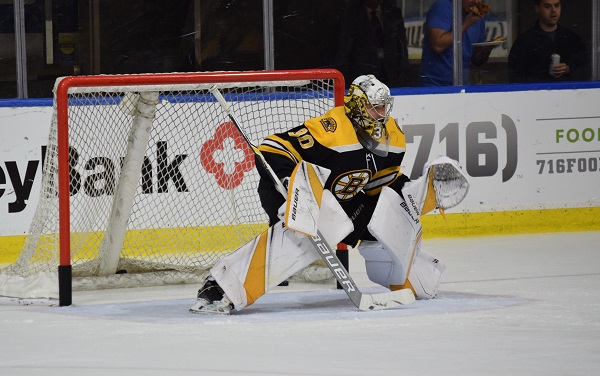 Game 2, the feature game of the weekend, saw Dan Vladar take his place in the crease to put a kibosh on the Buffalo Sabres scoring chances.  His 6-foot-5, 185-pound frame towered over the net as the puck was dropped at the Harbor Center. After spending two seasons with the Atlanta Gladiators, Boston’s ECHL Affiliate, Dan was ready to make his next step up the pro ladder taking place in Providence as the second goaltender for the organization this coming year. His performance would not disappoint those invested in this 21-year-old’s blossoming career.

While the Sabres came into the weekend not only with a home-ice advantage but a strong and wily group of youngsters, the first period ended with only a single puck making it past this Czech beast. Not completely satisfied with his first period, Vladar came into the next two periods with a galvanized resolve and a positive outlook. Not one of the battery of shots on goal was able to penetrate this jolly giant’s façade. 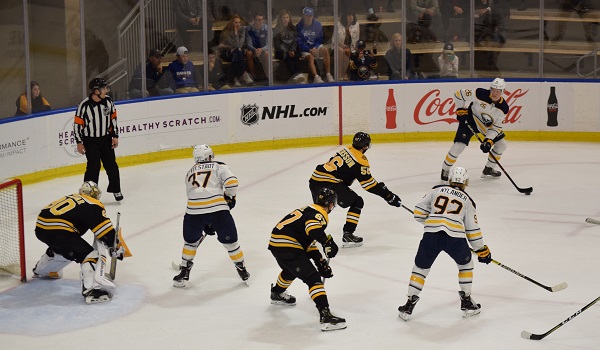 Finishing the night with a record of saving 38 of 39 shots on goal would leave many a goalie, tooting his own horn, but not our Vlad. When asked about his performance in the net his humble attitude and desire to continually better himself was on full display. “I feel good, but it is my first game of the season … I felt a little bit off my posts, but I got a little bit stronger over the summer, so my pushes were good…To be honest, it was not my best hockey. ”  In contrast, Jay Leach felt Vladar had an outstanding performance. “I think at first he had a few saves that looked like he hadn’t played in six months, which he hadn’t, but he settled right in, and ‘Vlady’ will always give you his best effort … guys love playing in front of him … and he was really very impressive.”

Another pop fly save for @danvladar, if this gig doesn't work out… six months training he can be an outfielder for the Sox! #ProspectChallenge

The third and final game of the weekend saw Dawson Weatherill step up in an attempt to send the New Jersey Devils packing. Another formidable obstacle at 6-foot-4 and 190 pounds, Weatherill came to the prospect challenge as an invite. Basically, he was brought up to test the waters and fill out the third roster spot as some would say.  Not taking this merely a chance to mingle with the pro boys or a holiday with a bit of hockey thrown in, Dawson buckled down, worked hard at all practices and morning skates, and soaked up all the information he could from the coaches and teammates here in Buffalo.

Unfortunately, learning does not occur overnight and being the least seasoned of the goalies here for Boston, Dawson saw the third game come to a disappointing close with a score of Devils 6, Bruins 2.  He was not as focused or as agile as Vladar and Keyser, and he appeared to have trouble from time to time with letting the frustration overtake him.  While he was not able to vanquish these Devils, Weatherill will take what he has learned in this tournament back to the Spokane Chiefs in the WHL and continue to grow and develop, hoping for another shot in future seasons.

Finishing with a strong showing of winning two of the three matches, the Bruins goalies were ready to head back home and get the rest of the preseason underway.  Don Sweeney confirmed that Vladar would be heading to Providence to split time in net with Veteran P-Bruin Zane McIntyre. “We play a lot of three in three situations in Providence, where one goalie gets two out of those three,” he said. “You want that competition, he really needs to challenge and push Zane for as many starts as he can get.”

So, while Keyser and Weatherill set off to mature for another season, it is up to Dan Vladar to determine his own next big move.