One of the benefits to covering a preseason event like Buffalo’s Prospects Challenge is the amount of access to and the amount of time you get to spend with the players and coaches asking questions. I found that everyone was very amiable and ready to answer any questions I had for them, even when not directly hockey related.  For example, did you know the Jakub Zboril fell in love over the summer?  Ok — don’t get carried away here, he fell in love with tennis. He explained, “My brother and I took up tennis over the summer … other than hockey, the only sport I love is tennis.”

Now that I really have your attention, I will tell you, on a recent appearance on the Beers N’ Bruins podcast hosted by Mark Allred, he asked me what I felt about Jay Leach.  It wasn’t hard to come up with a solid answer really.  From a fan’s perspective, sitting in the stands week after week, watching him direct traffic, boost morale and guide the boys set to take the ice, what I saw was a calm, quiet, completely cool coach.

Check out episode 6 of the @BeersNBruinsPod in partnership with @TalkPrimeTime! On this the second show of the week I sit down with @hockeygirl2976 who’s covering the #NHLBruins Prospect Challenge @SoundCloud #NHLBruins #Boston #PodernFamily #PodcastHQ https://t.co/Kvl8y9EMpF

Whether they were winning or losing, having a “conversation” with the stripes or failing to make it past the first round of the playoffs, I never saw him break into a rant or flail about with frustration. Once the podcast was over, I began to wonder how naïve I was being — is he always like this or does he blow up behind closed doors? Is this the type of coach he aimed to be from the start? What does he think of his style? What do the boys on the bench think of him? The questions continued to swirl, but I knew right where to look for answers. 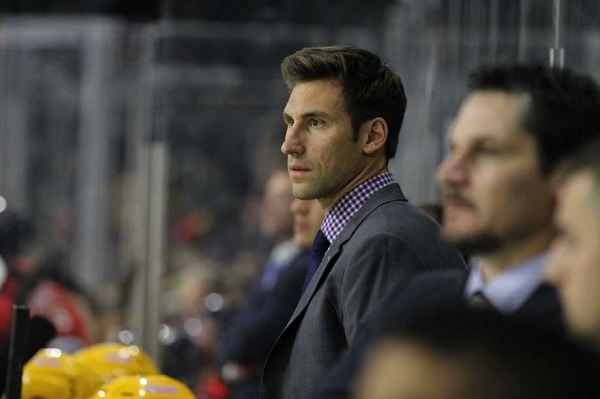 I started with the man himself. On the second day in Buffalo, I interviewed Leach about how he coaches and what his plan was when transitioning from player to coach. He explained that he never really knew what to expect or how to be the best coach. “You try to do your due diligence, come in with an idea, but you go through a year with a bunch of experiences, and you come out the other side and things are just different.”

By nature, he is the type of person who likes to “check his boxes” and be sure that tasks are complete, but he tempers his needs to filter a ton of information down to the players with the understanding that makes him a “players’ coach.”

“I am 39 years old, I am not that far removed from playing, I don’t want to come across as anything other than who I am … obviously, we have standards, and we hold everyone to those standards, but it has to be organic, I try to create a good environment…” 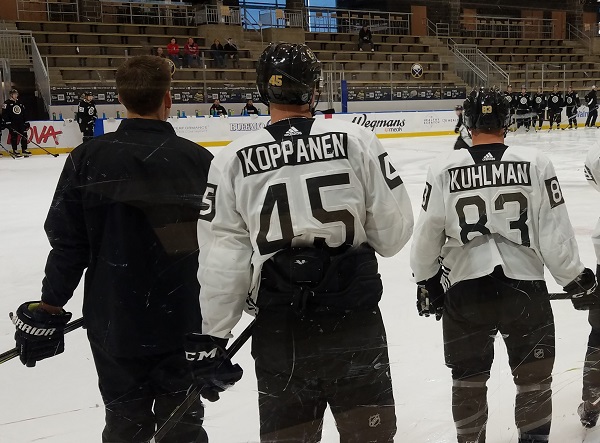 When I had the chance to ask his players about his coaching style and how he compared to other coaches they had worked with each player had their own take, but it all boiled down to three basic facts:

The last question I posed to both Coach Leach and each player was about his composure behind the bench. Jay responded, ”It’s all right here (motioning to his chest), right here and maybe a bead of sweat, I don’t know if you will ever get rid of that … I need them (the players) to not think that is happening.” Apparently, the old adage of never let them see you sweat holds fast with Jay.  Players responded likewise saying that he was always composed behind the bench and while once and a while he will blow off steam behind closed doors, all in all, “he is as level as they come.”

"The way the Boston Bruins want to play, and the way that we compete and we prepare, I hope they've been able to take some of that away from that experience this weekend."

🎥Jay Leach speaks at the conclusion of the 2018 Prospects Challenge: pic.twitter.com/ZvISsa2T0T

The result of the interviews with both Coach Leach and his players has solidified in my mind that he IS that solid coach I see behind the bench. He guides and directs them with composure and tough love when needed, but most of all he is truly invested in the development of not just the players, but himself. “I would imagine that every year I will come out a little different,” he said. “I think — I hope — that means I am growing.”