Bruins May Have Found A Fourth Line Trio They Like 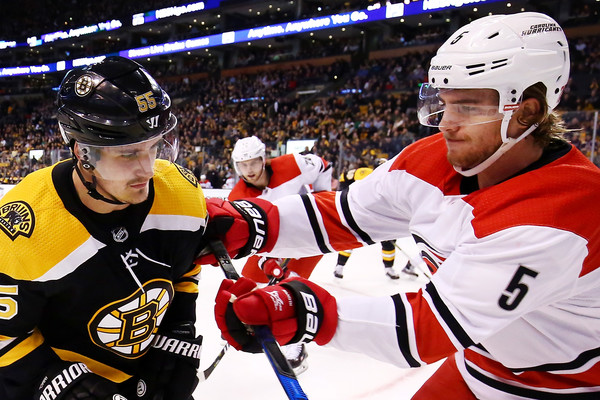 Yes, you’ve almost certainly heard enough about the first line of the Boston Bruins. Arguably it’s the best line in hockey, and all three players are almost certainly MVP-caliber players. The trio of Brad Marchand, Patrice Bergeron, and David Pastrnak have put up an absurd 36 combined points in their first seven games. At this point, nothing this line does should surprise you as they work so well together. However, there’s another line on this Boston team that might be just as effective.

The fourth line has always been an effective line for the Bruins going back to the Stanley Cup season of 2010-2011. Last year’s group of Sean Kuraly, Noel Acciari, and Tim Schaller was very impressive, and they were a group that did everything that Bruce Cassidy asked. The playing styles of all three guys blended so well together, and they were always a high-energy line. Obviously not guys who would score 20 goals but a consistent effort from all three players made it seem like that line was just as effective as the first line.

With Schaller having moved on to the Vancouver Canucks (who coincidentally, the B’s face Saturday) the Bruins had some decisions to make in the offseason about who could come in and join the fourth line. The Bruins settled on two bottom six forwards in Joakim Nordstrom and Walpole, Massachusetts native Chris Wagner. To some Bruins fans, it was a strange move as they believed Schaller could’ve been resigned. In my mind, however, Schaller came to Boston quite the same way as these two, and some people were just as skeptical of his signing. Neither Nordstrom or Wagner have been dominant statistically speaking, but both have given the Bruins forwards who can play anywhere on the bottom six.

Joakim Nordstrom roofs the one-timer for his 1st goal as a Bruin! #NHLBruins⁠ ⁠ pic.twitter.com/Tj9wekgoSV

To add to the depth of Nordstrom specifically, he’s shown he can perform on even the second line as he played a few games with David Krejci and Jake DeBrusk. With Nordstrom and Wagner, it’s not about scoring goals, it’s about the consistent effort they’ve brought to every game they’ve played.

Now, back to the fourth line. Wagner has the been the guy who’s played the majority of his games on the fourth unit with Kuraly and Acciari. Again, it’s not goal scoring that’s impressed me with this group, it’s the effort, and it’s been so consistent they’ve arguably been the Bruins second-best line so far this season. The physicality shown by this line has also been positive as they’ve constantly finished their checks and aren’t afraid to get their bodies involved.

The energy of this line is so much fun to watch as all three guys play with a great edge and when they’re at their best they can get scoring chances often. In this era of the NHL, physical play is definitely moving away from the game, but it’s still a part of the game that can be effective for the best teams. Not only can this line be physical, but they can also bring good energy to a game when it looks sluggish, and they can on occasion give a team quality scoring chances.

Many people figured that Kuraly would be the third line center to start the year which he was, but it was clear that the fourth line role is a better role for him. Playing on this line gives him more freedom to play the fast, physical game he plays so well without being counted on to provide tons of scoring chances. Don’t get me wrong, he can create chances, but that’s not what his strength is. Kuraly is much better suited in a role that he can get the most out of. Adding two guys in Acciari and Wagner on that line that play a very similar game to Kuraly, this group has the chance to be a special group for the Bruins moving forward.