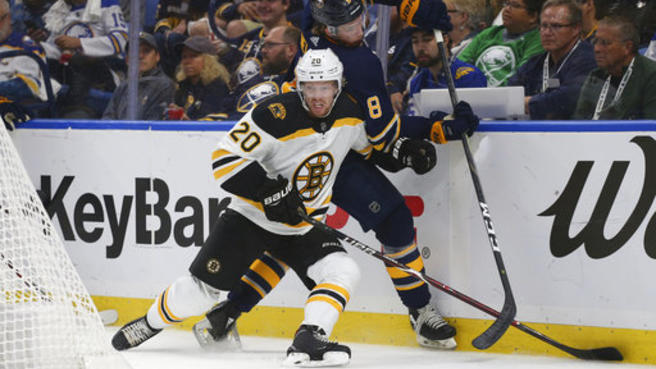 When the Bruins signed Joakim Nordstrom this past offseason, it was not a move met with much fanfare. Nordstrom was coming off a season in which he scored only two goals in 75 games. The Bruins needed help offensively, and that is not his strength. He was signed because of his skating ability and work on the penalty kill. Through the first seven games this season he has made a good first impression and been quietly impressive.

Against Edmonton, last Thursday Nordstrom made his debut on the second line alongside David Krejci and Jake DeBrusk. The Bruins were hoping he could provide a spark. The move proved to be effective as in three games with Nordstrom, the Bruins second line had three goals. Despite his impressive play, Nordstrom was moved to the fourth-line before last nights game. Although he is not a gifted scorer Nordstrom is still valuable in many ways.

Furthermore, Nordstrom has created plenty of chances of late. Although he only has one goal this season, over the last four games he has had twelve shots on net. Nordstrom has found open space in the offensive zone and been aggressive on the puck. By being on the second line, he took the spot that was expected to go to Danton Heinen or Ryan Donato. Nordstrom showed the Bruins young wingers what they will need to do in order to be successful in that role. Heinen responded well in his first opportunity last night recording an assist on Krejci’s first goal of the season.

Joakim Nordstrom roofs the one-timer for his 1st goal as a Bruin! #NHLBruins⁠ ⁠ pic.twitter.com/Tj9wekgoSV

Additionally, moving Nordstrom to the fourth line puts him in a better position to succeed. While he was effective on the second line, his playing style does not fit a top-six role. On the fourth line, his defensive game will be more of a priority which will make up for his lack offense. He is a smart player who is good at reading breakouts, especially in the neutral zone. Nordstrom has a knack at getting to the net but struggles to finish. Alongside the physical play of Noel Acciari and Sean Kuraly, he could excel.

Nonetheless, this will not be the last time Nordstrom switches roles. Other than the Bruins first line this team has struggled to score. It is early, and many players are still finding their way. Cassidy is trying to find the right line combinations to make the Bruins offense click. Even though Nordstrom is being moved down, he will still play a vital role.

Versatile winger Joakim Nordstrom gaining some notice with the Bruins after a quiet arrival in Boston over the summer https://t.co/W6P1DSQba4

Last season the Bruins fourth line was one of the most productive in recent memory. Cassidy turned to them whenever the Bruins needed a spark. This year they have gotten off to a slow start, and Nordstrom will be looking to change that. His first test came last night against Edmonton. He responded well and put two shots on net. Nordstrom has shown his versatility early on and played well in whatever role the Bruins have placed him in. The season is still young, but Nordstrom is already making his mark.