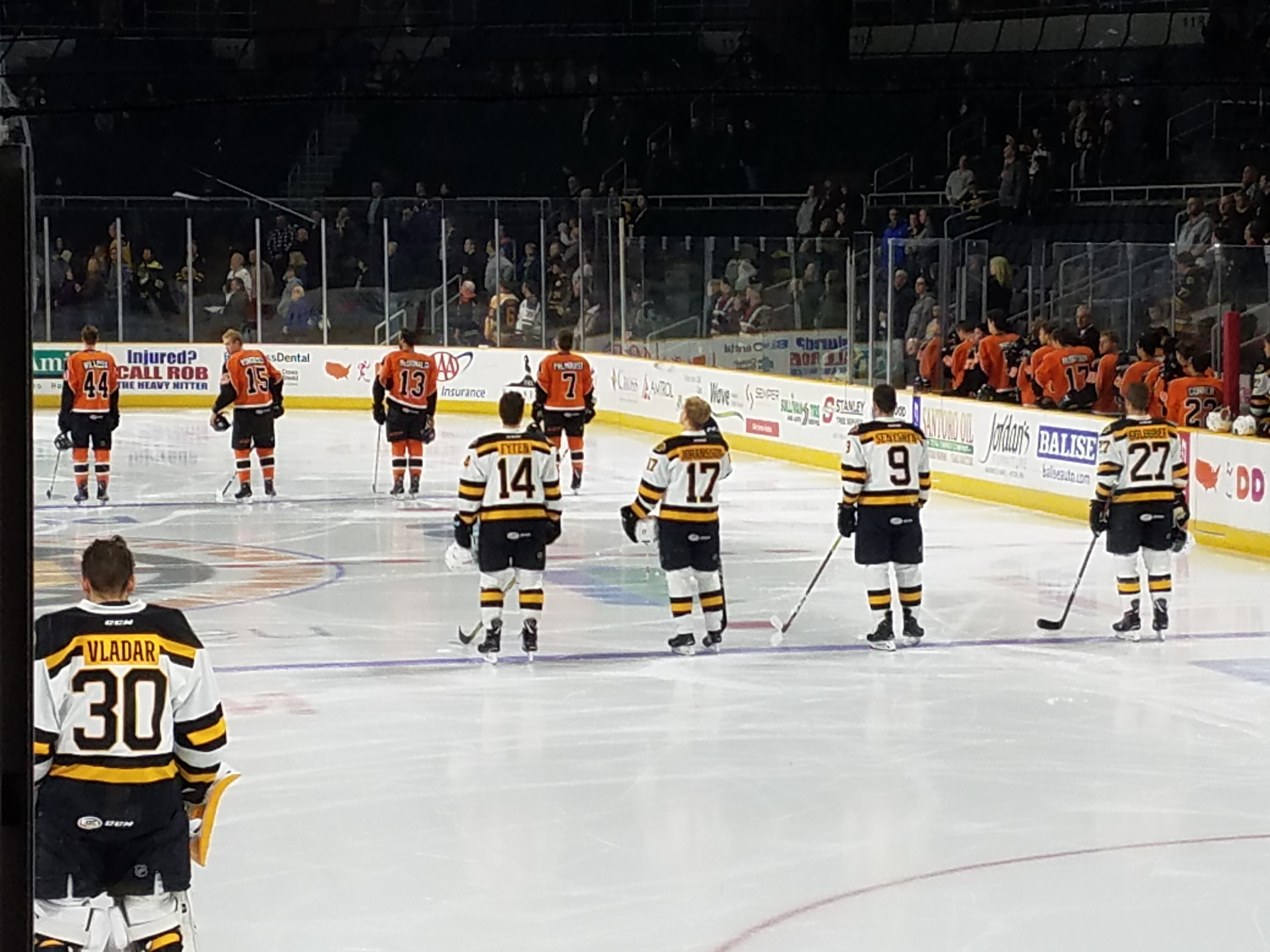 Week seven was a mixed bag for the Providence Bruins.  The massive challenge that the weekend presented Providence would not see them shrinking away, but rather standing tall and ready for battle.  They were barely held off from a victory on Friday night and continued their winning streak against the top-ranked Rochester Americans on Saturday.

Dan Vladar got the start in net on Friday at home against the Lehigh Valley Phantoms.  Saving 21-26 shots on goal bringing his save percentage down to .897.

Zane McIntyre was your Saturday night starter at home against the Rochester Americans. Saving 27-29 shots on goal making his save percentage .848. 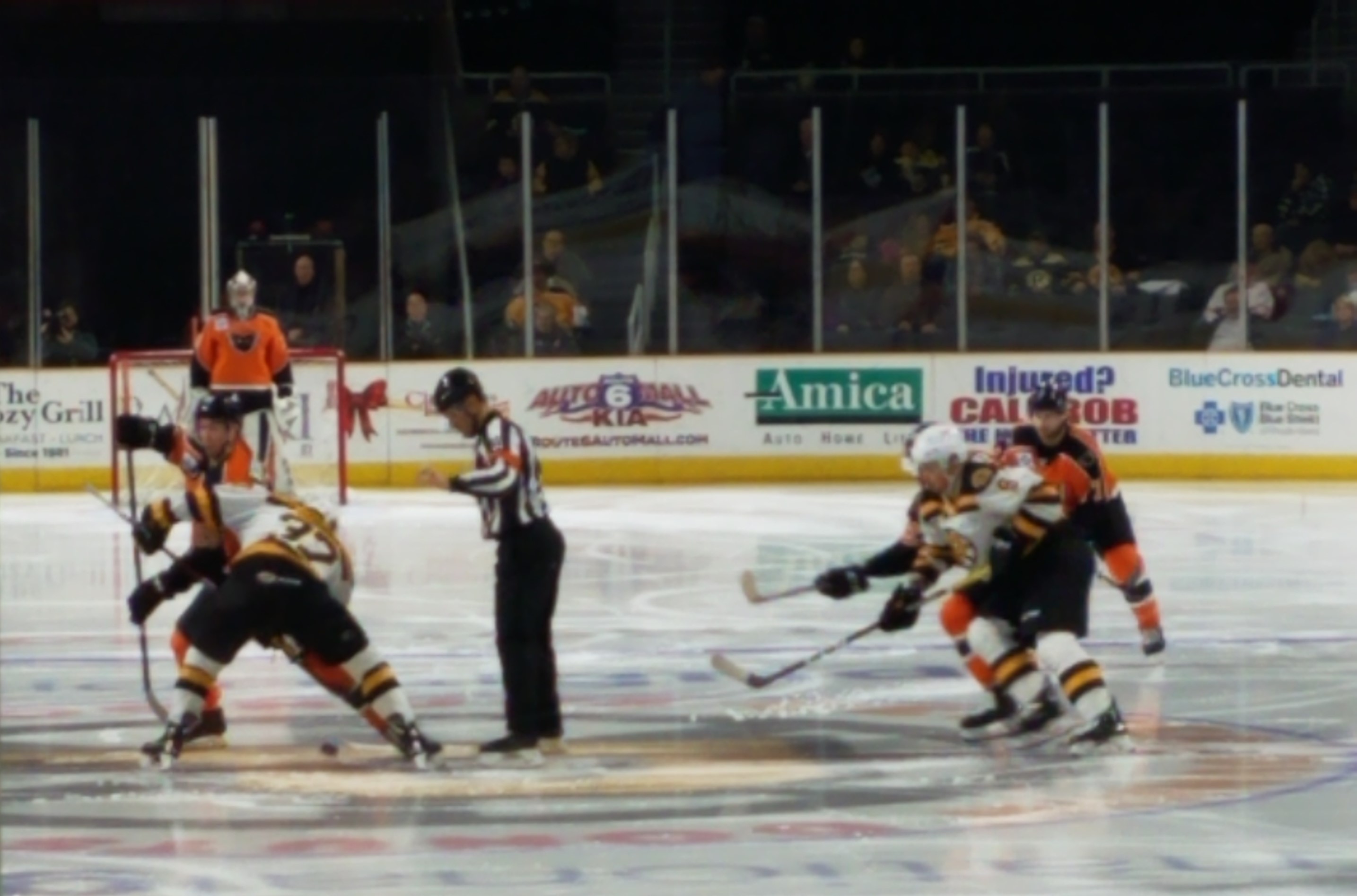 The Providence Bruins host the Lehigh Valley Phantoms at the Dunkin Donuts Center for the first time since their Calder Cup ending match-up in April.  This action-packed game was filled with ups and downs for our Baby B’s.

The first period saw the Providence Bruins looking stronger than they have all season.  They were coordinated and composed, with good passing, solid puck-handling skills and the level heads that were required to out-think the Phantoms.  The first three goals of the game went to the Bruins at 2:00 Cameron Hughes scored with the help of teammates Fitzgerald and Cehlarik. Six-and-a-half minutes later Colby Cave fed Wiley Sherman what he needed to score the second goal of the night.  Already having the assist, Colby wanted a goal of his own.  So, at 13:01 with the help of Goloubef and Johanssen he satisfied this want and put the third goal on the board for Providence. At this point, the wheels started to come off.  The penalties began to roll in, and Lehigh Valley started to pull themselves up by their bootstraps.

The first penalties of the night were minors at 15:09 awarded to Bruins’ Fyten (High Sticking) and Phantoms’ Connor (Hooking).  After returning to full strength from the 4-on-4 play, Lehigh Valleys Bunnaman was able to sneak a puck in behind Dan Vladar and put the first goal on their first goal on the board.  Karson Kuhlman took only one minute to answer this with a Providence goal to return the Bruins to a three-point lead.  Perhaps the three-point lead is not a good thing for Providence as in the last minute of the period the Bruins were slammed with two penalties.  Szwarz was called for slashing at 19:16 and Goloubef for roughing at 19:53.

The second period began with Providence leading 4-1 but Lehigh Valley with nearly two whole minutes of 5-on-3 play to work with.  The Phantoms would not let this 5-on-3 go to waste when at only twelve seconds Connor scored the power-play point bringing Lehigh Valley to within 2 points.  To add to the misery, the Providence team that appeared on the ice in the second was a completely different team that started the game, not literally of course.  Their puck handling was poor.  They were continually being stripped of the puck and were passing to phantom players, not reading or setting up well for plays.

Lehigh Valley continued to press the Bruins, once again sneaking a puck around the back of Vladar at 11:03.  Varone had noted that during the first period that Dan Vladar was sliding a bit farther out of the net than normal tonight and leaving room to sneak the puck in between his skates and the pipe, just as his teammate Bunnaman had in the first.

Heading into the third period the score was Bruins 4 – Phantoms 3.  There was still hope that the Bruins would beat the team that had ended their run for the Calder Cup earlier this year.  That hope was severely damaged at 4:55 when Lehigh Valley’s Twarynski rushed the goal and slammed into goaltender Dan Vladar.  Twarynski was awarded a goal and goaltender interference.  Vladar was visibly shaken and took a significant amount of time and a visit from the trainer before recovering enough to get up and get moving again.  Twarynski’s goaltender interference call was officially recorded as roughing, but either way, the goal was somewhat questionable and definitely rattled the team.

The level heads that prevailed at the beginning of the game were nowhere to be found now, as both Sherman and Donato were called for minor penalties in the next ten minutes.  Lehigh Valley capitalized on Donato’s penalty to score a power-play goal giving them their first lead of the day Bruins 4 – Phantoms 5 and securing their victory. 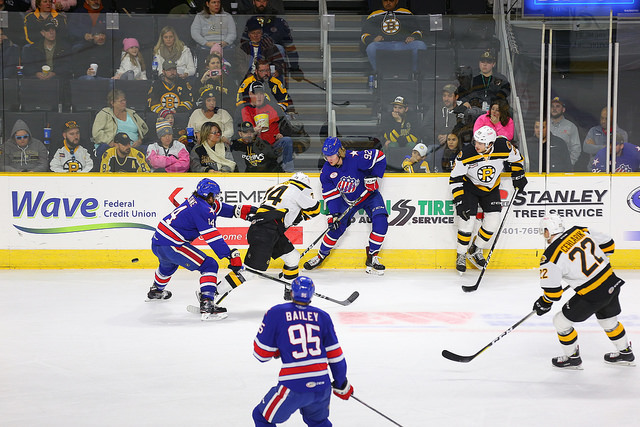 The Rochester Americans came to Providence ready to show the Bruins what a first ranked team looked like.  The Bruins, on the other hand, were ready to prove that they were not the team that the numbers are claiming and continue their streak of wins against Rochester.

The first period was a battle of wills between the two teams.  Each team doing their best to get the puck through the neutral zone and into enemy territory.  The effort seemed nearly futile from time to time as the puck would ultimately be turned over and back it would go.  Only six shots on goal for Providence and eight for the Amerks in the entire period, but in contrast to recent games, both teams were able to keep relatively composed with only three penalties being called. Entering the locker room, the score was 0-0.

Both teams came out fired up to hit the back of the net in the second period.  The first to finish the race this time was the Amerks Bailey, he was able to find a way past Zane McIntyre twice in the first twelve minutes two put the visitors up 2-0.  Shortly after that, however, Guhle was called for interference, and Providence was suddenly on the power-play.  Capitalizing on the power-play has not been the Bruins strong suit, but Jordan Szwarz on his first weekend back from injury decided to change that. Scoring his first goal of the weekend with the help of Donato and Galipeau he brought the Amerks lead down to one.  The teams traded minor penalties back and forth to the end of the period and headed to the locker room this time with a score of Providence 1- Rochester 2.

The third period was the fight for the finish.  Providence came out showing some steeled nerves and renewed confidence.  Their passing was controlled, and the defense was well above par.  First out of the gate this time was the pair we have come to see often, Cehlarik and Cameron.  At two minutes Cehlarik fed Cameron the perfect puck to sneak by the Rochester goaltender and level the score at 2-2.  The rest of the period was much like the first, a lot of back and forth a couple of minor penalties but no goals for either side.  The resulting tie score sent this game into overtime.

Overtime was not to last long.  Rochester took the first shot on goal, but Zane defended his post not allowing the puck to find its way in.  Only a minute in the Bruins found their opportunity.  Colby Cave was able to pass the puck Ryan Donato who was in the perfect position to score the game-winning goal and capture the two points for Providence! 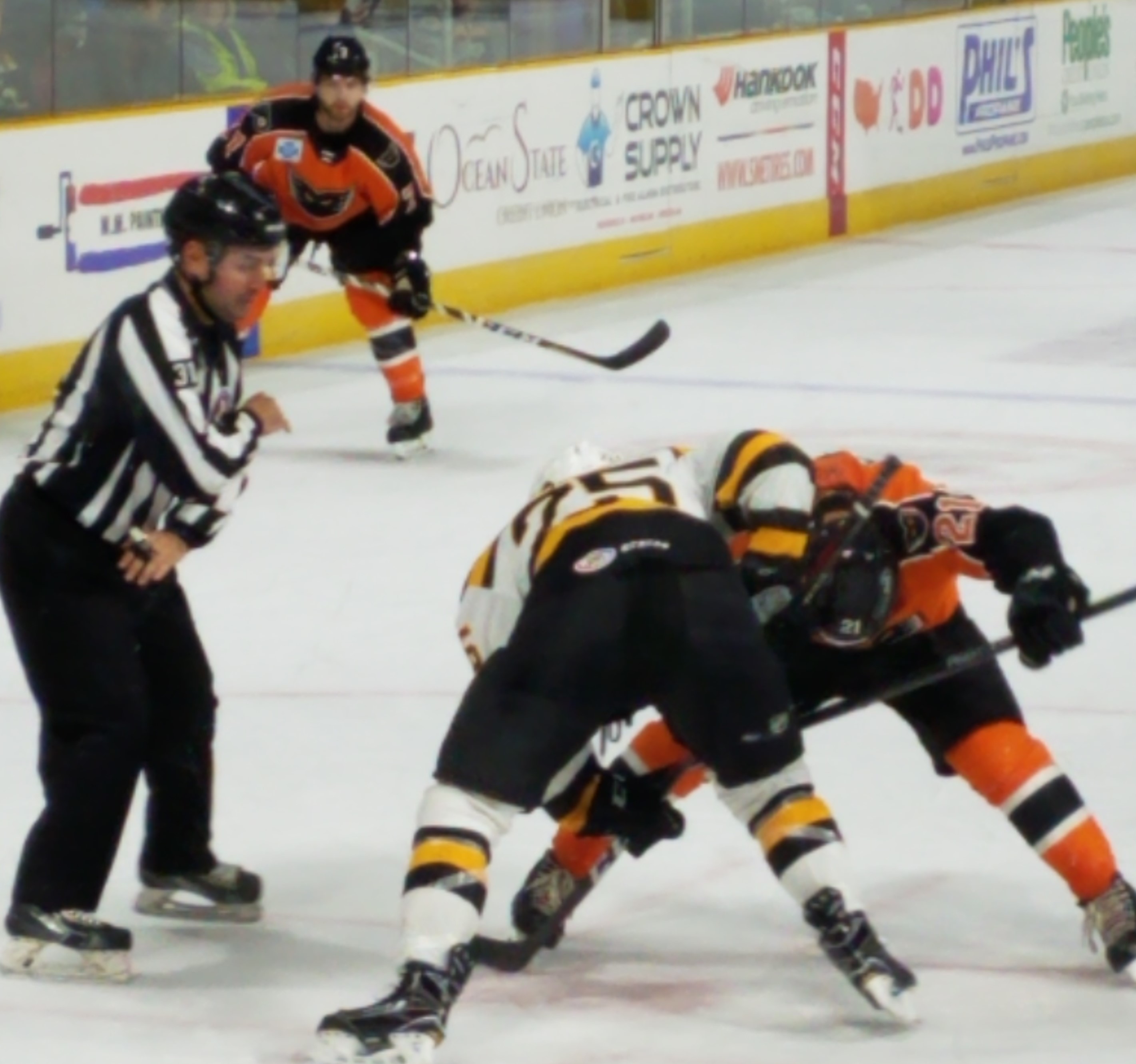