Catching Up With The Boston Pride 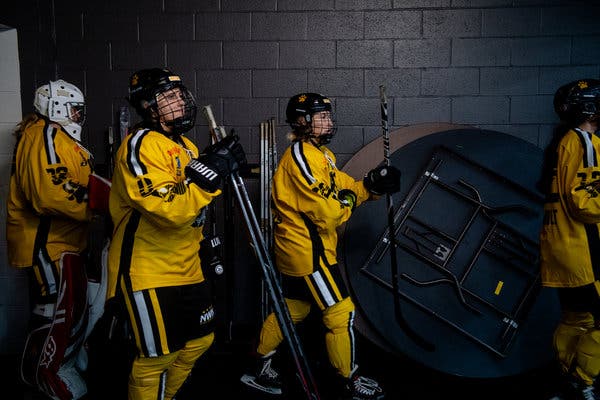 With the official start of the NHL still being discussed,  the Boston Bruins organization has been keeping busy. From the recent NHL draft and trade deadlines to the continued charitable efforts from individual players, the Black and Gold are doing everything to normalize these past few months. But things have also been low key busy for their all-female counterpart: The Boston Pride.

Since last year’s announcement that the Boston Bruins have partnered up with the Pride in an effort to grow the sport of female hockey while spotlighting the NWHL (National Women’s Hockey League), things have certainly been pushed at full-tilt. Under new ownership, the team has enjoyed upgrades from better traveling accommodations to new jerseys.  Prior to the global COVID-19 pandemic, the Pride was riding high with a 19-game winning streak. However, current events would change that and the 2020 Isobel Cup Championship against the Minnesota Whitecaps was canceled.

Currently, the season is expected to start in January 2021 as the league continues to work with experts to ensure that teams return to play in a safe environment. The Pride ended the regular season 23-1 and easily captured the league’s regular-season championship, adding one more banner amongst Boston sports.

The team recently announced the official partnerships with Harpoon Brewery and BioWave. The partnership with the brewery includes cross-promotions and virtual happy hours for Pride fans. Dan Kenary, Harpoon Brewery CEO and Co-founder had this to say about the announcement:

“Hockey fans are very much akin to craft beer drinkers. They are passionate, they are loyal, and there is no better brand ambassador. We couldn’t think of a better team to partner with than the Boston Pride, who in only five seasons have built a winning tradition the city of Boston should be proud of. We are so excited to introduce our consumers to the Boston Pride and have fans of the Pride become more knowledgeable about the Harpoon brand.”

The Boston Pride is excited to announce that @harpoonbrewery will be the team’s official beer partner for the 2020-2021 season.

As the Boston Pride gear up for their sixth season, the team also announced their new partnership with BioWave. The company is based in the United States and helps with alleviating pain for top elite athletes, touting itself as a much better alternative to a regular TENS unit.

This recent September, in a collaboration with the Boston Red Sox and JetBlue, the Pride helped to donate more than 60,000 reusable masks to the Boston Public School (BPS) students and teachers. Money was raised through the efforts of Warrior Ice Arena (the team’s home arena) by selling commemorative rally towels and Isobel Cup Final pucks. The Meigrey Group also auctioned Boston Pride autographed hats to raise money for the initiative. The masks will be a welcome addition to the 200,000 thousand reusable and two million disposable masks that have been purchased for the Boston schools.

The Pride organization hired former Head Coach and General Manager of the Canton Cubs (a Tier III junior ice hockey team) Johnny McInnis. He will serve as Assistant Coach to Boston and as an NAHL scout, player development, and skills coach with Militia HD. McInnis is currently the owner and operator of Shots Hockey Academy down in Quincy, MA. He joins current head coach, former NHL defenseman Paul Mara and general manager, Karilyn Pilch. Pilch played for Boston University as a goaltender and was previously named Director of Women’s Ice Hockey Operations at BU.

McInnis, who hails from the South Shore, signed with the Lake Erie Monsters of the American Hockey League in 2014 after a record-setting career at Minnesota State University Mankato. While there, he tallied 42 goals and 26 assists for 79 points, scoring the second-most game-winning-goals by a player in Minnesota State history (14). He also served as Captain in his senior year. McInnis would go on to play for the Orlando Solar Bears and the Allen Americans, ending his career playing last year with 24 games with the Maine Mariners.