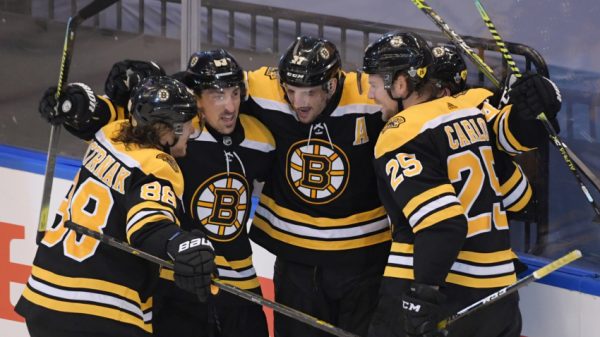 While the upcoming NHL season is very uncertain in regards to when it starts and how many games will be played, we can still look ahead to the 2020-21 campaign in anticipation. The Bruins lost some assets during the offseason, but remain to be a veteran-filled roster that has many opportunities to reach some milestones next season.

Not only is it difficult to just make it into the National Hockey League, but even more difficult to consistently play for years. Here are some Bruins that are set to reach games played milestones during their career:

David Pastrnak, Brandon Carlo, and Matt Grzelcyk will, in my opinion, be Boston Bruins for quite a long time. Pastrnak has solidified himself as one of the best goal-scorers in the league, winning the Maurice Richard Trophy alongside Washington Capitals forward Alexander Ovechkin for most goals scored this past season. Brandon Carlo and Matt Grzelcyk will see a larger responsibility on the backend moving into next season with the departure of Torey Krug (free agency) and the uncertainty revolving around current UFA Zdeno Chara.

Brad Marchand, often known for his on-ice antics and numerous suspensions over the course of his 11-year NHL tenure, has recently proved to the rest of the NHL that he is a dynamite winger and is one of the best in the game. In five of his last six seasons, Marchand has scored 30 or more goals with his best season coming in 2016-17 where he put up 39. This past season was the first year since ’15/’16 that Marchand did not reach the 30-goal plateau, but still managed to reach 28 goals in a shortened 70-game schedule.

Pastrnak, on the other hand, may have a tougher time reaching his milestone but I do believe he reaches it. As of right now, the schedule for the upcoming season is not yet confirmed, but there is a chance that we do not see a regular 82-game season when the league does resume. Besides, Pastrnak will miss time into the year as he recovers from offseason surgery. Regardless though, he should manage to score twenty more tallies to hit that 200-goal mark.

David Krejci may go down as one of the most underrated Bruins of all-time and over the last decade or so, perhaps one of the best second-line centers in the NHL. Krejci is only 21 assists away from 500 in his career – a feat that should be well in reach considering the 34-year-old Czechoslovakia native has scored at least 21 assists in every single season dating back to 2007-2008.

David Pastrnak will 99.99% reach his milestone, but Charlie Coyle’s milestone might be a little more difficult to reach. Coyle has only produced 24 or more assists in a single season in three campaigns, all of which with the Minnesota Wild. In 2019-20, Coyle put up 21 helpers, so perhaps with some more chemistry on his wings – he can bump up his production and hit that milestone.

Once again, David Krejci and David Pastrnak could be in preparation for a milestone-filled season next year. Both of them are easily capable of surpassing the next century mark in points and preventing unforeseen circumstances – will indeed surpass them. Charlie Coyle is very likely going to reach his 300-point plateau as well.

For Ondrej Kase and Charlie McAvoy, that 100-point number is so close on the horizon. Kase will be in a bigger role next season with the Bruins desperately needing more depth scoring especially at 5-on-5. Whether he plays on the second line with Krejci and DeBrusk or the third-line with Coyle and potentially Anders Bjork, Kase will have a bit more pressure on his back to up the production from his 0-4-4 playoff stat line in 11 playoff games last year.

Charlie McAvoy will have more offensive pressure as well with the loss of Krug on Boston’s blueline. The 22-year-old had 5-27-32 numbers in 67 games last year and I would be willing to bet that those numbers see an upward climb once the 2020-21 season comes to a close.

As another year goes by, it’s another year where Tuukka Rask is the starting goaltender for the Boston Bruins. Rask finished among the top three finalists for the coveted Vezina Trophy in 2019-20 and won the William M. Jennings with his partner, Jaroslav Halak. Rask has won a minimum of 26 games in seven consecutive seasons and will be yet again, a crucial piece to the Bruins’ core.

While yes, the goaltending duo of the Bruins is up there in the age category, both Rask and Halak not only get the job done but get it done very well. As mentioned previously, the two of them won the William M. Jennings Trophy in ’19/’20 and a large part of that is due to Jaroslav Halak. Halak’s solid play in between the pipes allows some of the pressure to be taken off Rask’s shoulders – improving the performance of both of them.

Being one of the Original Six franchises, the Bruins have an illustrious history with many legends that have graced the Spoked-B on their sweater. So, when a current Boston Bruin passes one of the franchise greats, it’s a big deal. Here are some potential shifts we can see in the franchise records next season:

Early January is the targeted date for the 2020-2021 NHL regular-season to officially begin. When that does happen, the Boston Bruins have many opportunities to reach plenty of milestones. It should be a very eventful year.

Information and statistics are courtesy of hockeyreference.com and nhl.com.